101 Best Women’s Eye Of Horus Tattoo Ideas That Will Blow Your Mind! 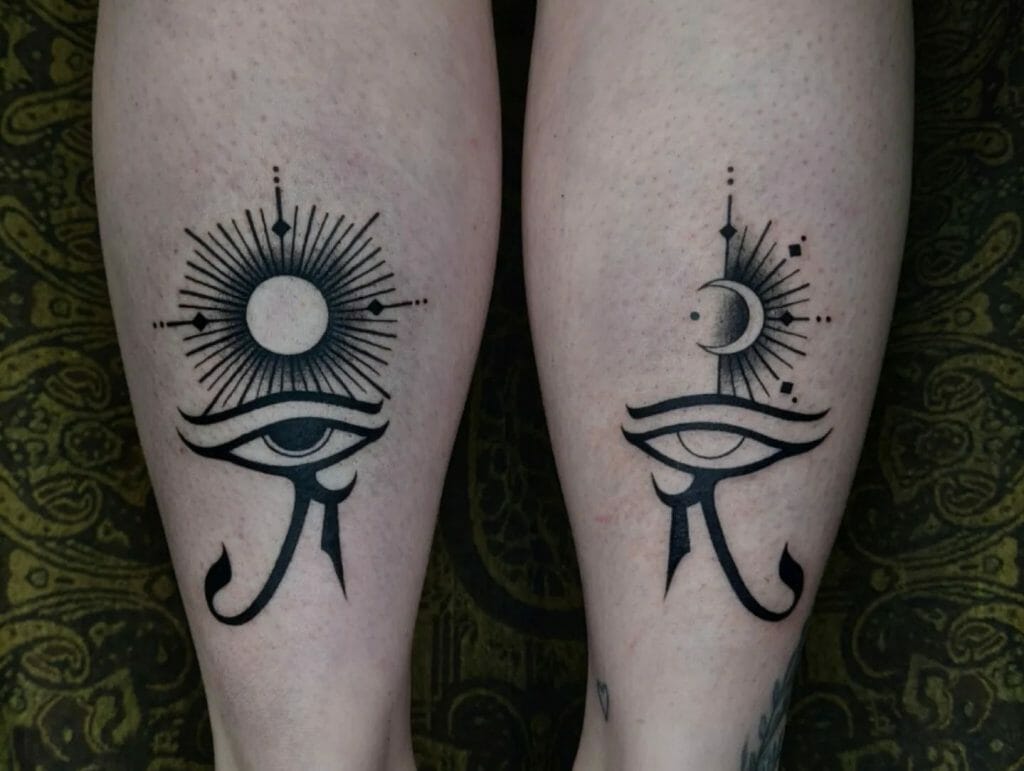 Fascinated with Egyptian mythology and are looking for some amazing tattoo ideas? We got you covered. Check out the best Women’s eye of Horus tattoo designs.

The Eye of Horus is one of the most common and famous symbols from ancient Egypt mythology.

The Eye of Horus is seen as a symbol of protection from evil spirits and prosperity that comes from the myth of Isis and Osiris. these tattoo designs have gained a lot of popularity over the last few years with the growing interest in the mythology of Egypt.

The story of the Eye of Horus is actually very interesting. It comes from the conflict between Egyptian Gods, Horus and Set who constantly had arguments with each other. During one such argument, Set tore the left eye or both eyes of Horus. The eye was subsequently healed or returned to him with the assistance of diety, Thoth. Horus then offered this eye to his father Osiris so that he could sustain in his afterlife with the power of the eye. Since that time, the eye of Horus has been equated with the offerings given at funerals or at temples to God.

Generally, this eye of Horus is symbolised with an eye which has distinctive markings. An eye of Horace tattoo is said to have protected healing power and magical energy that was very common in the ancient Egyptian art. Under the eye, is the symbol of a hieroglyph which has been used in ancient Egyptian Mathematics.

The Eye of Horus tattoo is a beautiful design with a deep meaning. If you are looking for some fascinating tattoo designs, we have a list ready for you!

According to the belief of ancient Egyptians, Horus was a sky God. They believed that his left eye was the moon and right eye was the sun. The solar and lunar eye were equivalent to the red and white crown of Egypt. Another very common belief is that eye of Horus can also be interchanged with the eye of RA. RA was the sun God, also personified as a goddess.

This beautiful eye of Horus tattoo shows the left and right Eye of Horus. On top of the left eye, there is a moon and on top of the right eye there is a sun. This tattoo has been made with bold strokes of black ink. The tattoo artist has used white colour to highlight the sun and moon. Each eye has been made on one leg of the person. If you want, you can also get matching eye of Horus tattoos with your friends or family members.

This tattoo design is a much simpler version of the original Eye of Horus Tattoo. Many Egyptian texts reveal that ancient people of Egypt had spiritual beliefs about eyes. It is very commonly recognizable from ancient Egyptian art.

This tattoo is very common among women. It is believed that it brings protection from evil spirits. There have been many variations of this design, however this one is a simple and elegant form. With fine lines of black ink, the tattoo artist has created a small eye of Horus tattoo. It is placed on the wrist. Since this tattoo is very what’s the time it can be placed on any part of the body and it will still look very elegant.

The Eye of Horus has been a very important symbol for ancient Egypt. This tattoo represents protection and healing and has been a very common tattoo design from the ancient times. People believed that this tattoo would keep them in good health for a very long time. The placement of this tattoo on the body matters as either it can make a bold statement or can represent your belief.

This particular tattoo is a beautiful design by the tattoo artist who has used colours like black and grey to complete this design. Find line work and dotwork art has been used for this status. The Shades of Grey and black within the design add to the element of this beautiful tattoo.

Cleopatra was an ancient Egyptian queen who was seen as a woman of power and excellent leadership skills. She is the symbolism of beauty and feminine strength. Cleopatra used to dress up as goddess Isis (Mother of God Horus) on certain occasions, and sometimes she copied the style of Aphrodite. Her eye make-up used to be similar to that of Horus which enhanced her beauty.

This beautiful tattoo is a picture of Queen Cleopatra with Egyptian eyes. Her eyes look very similar to that of Horus. The intricate details of this tattoo make the entire design more appealing. The tattoo artist has used shades of black, grey, and brown to complete this design.

The Horus eye represents protection and healing powers. Along with the eye as the protective symbol, this tattoo also has a cross made behind it. Across tattoo is a representation of a person’s faith and devotion to their religion. Many people believe that a cross tattoo brings good luck. A cross tattoo in collaboration with the eye of Horus will bring good luck and protection from evil.

The tattoo artist has made this design with black ink. The blue eye in the centre has been made with varieties colorful ink like blue, grey, black and white. This statue is neither small or large and has been placed on the back of the upper arm. It is a versatile design and can be placed on any other part of the body.

According to ancient history of Egypt, Horus was actually depicted as a Falcon or a human with a falcon head. Soon that changed into another symbol of the stylised eye. This design shows a dark black line making the eyebrow extending into the eye and below the center of the eye or towards the corner goes an extension of another black line to the cheek. This particular design depicts Horus’s eyes in the same way. It is a smaller version of the eye tattoo. Dark black ink has been used to complete this design. To add to the element of the design, the words ‘Mind Matter’ have been written on top. This is a very simple small eye design and could be great for next tattoo.

If you are one of those people who is fascinated by ancient Egypt history, this eye of Horus tattoo is the perfect design for you. If you’re worried about the long term commitment of a permanent tattoo, you can request the tattoo artist to make a temporary one, and if you like it, you can convert it into a permanent one later. If you want to explorer further, you can check out the designs given below –

Still looking for inspiration, then checkout this blog post about eye of horus tattoo ideas.

What does the eye of horus tattoo mean?

The Eye of Horus tattoo is a powerful symbol of protection, good health and royal power. In Ancient Egyptian mythology, the Eye of Horus was associated with the god Horus, who was one of the earliest forms of the sun god Ra. The eye symbolised healing and restoration as it was believed that its bearer could ward off harm from evil spirits and bad luck. It is also believed that the Eye of Horus could provide wisdom, prosperity and health to its wearer. Therefore, this tattoo symbolises a powerful protection from potential negative influences while granting its bearer increased insight into life’s mysteries. This ancient Egyptian eye of horus tattoo often serves as a sign of strength, power and courage in the face of adversity. Additionally, it is also widely seen as a sign of protection and good luck in the spiritual realm.