10 Best Wolf Chest Tattoo Ideas You Have To See To Believe! 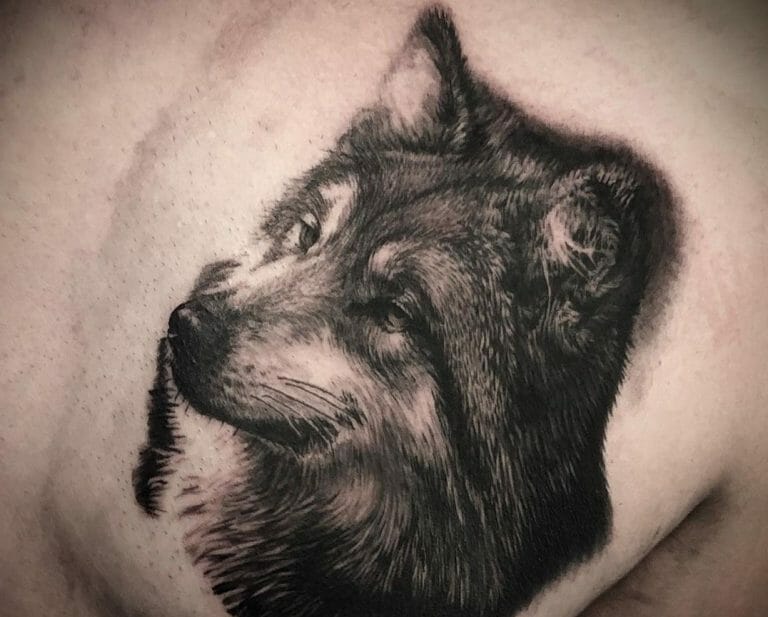 Are you fascinated by wolves and want a tattoo depicting them on your chest? Here is the list of 10 wolf chest tattoo ideas for you to explore.

Wolf is a powerful animal. A wolf tattoo can signify protecting one’s family, loyalty, and strength.

It is a sign of courage, strength, love for family, loyalty, intelligence, fortune, mastery, and independence.

You can get a wolf tattoo sleeve or a howling wolf. People wanting to get chest tattoos done either want to have a small wolf tattoo surrounded by other minor things or just a wolf head tattoo.

You can ask the tattoo artist to make as detailed tattoos as you want them to. The detailed designs represent many meanings forming a visual dictionary.  Whether it is a large tattoo or a small tattoo, the meaning associated with each varies depending on the person’s understanding and personality getting the tattoo done. Wolf tattoos can be made on the limbs, neck, and even on the chest.

Let’s explore the ten best wolf chest tattoo ideas, including standard designs, symbols, and ideas for you to choose from!

A Wolf chest tattoo generally includes a wolf head surrounded by elements such as adding fire or air into the mix. You could consider a howling wolf tattoo with fearless fangs and a moon in the background. Another design idea is a half and half where the wolf head is made, and half of it is covered with mandala art and other forms of tribal art.

Grey wolf tattoo is also an example of a watercolor wolf tattoo. The watercolor tattoo could include the entire pack showing the family of wolves or a lone wolf. It can be a small tattoo or even a large tattoo, depending on the individual’s choice. You can portray the fierce nature of the wolves in a modern way with colorful wolf tattoos.

Several cool wolf tattoo ideas revolve around a single lone wolf. A lone wolf represents independence and strength. This lone wolf tattoo has a wolf mandala on the side, floral design at the bottom and a sun-moon symbol on its forehead. Stars, trees, and the moon all are included inside wolf face. The big, blue eyes look like sparkling jewels and look captivating. The tattoo can start from the chest and then continue as an arm tattoo for a comprehensive, continuous look.

Geometric designs are trending nowadays and geometric wolf tattoos are first among them. This black ink tattoo is split down the middle, with one side designs in simple black lines while the other side shows intricate designs. You can either get the entire wolf or only certain body parts made using geometric techniques.

These are mostly seen as tattoos for men but can also be used by females. The ideal placement for most chest tattoos is slightly towards the shoulder to be a combination of chest tattoo and shoulder tattoo.

Wolf Chest Tattoo With Other Animals

You can pair a wolf chest tattoo with a tiger head or a lion head and show the animals hunting in the wild. This tattoo shows a howling wolf one side and a roaring lion head on the other. The wolf has striking blue eyes that make it stand out.

There are times when a howling wolf chest tattoo is combined with some other wild animal-drawn towards the neck or shoulder. The chest tattoo piece could also contain a full moon, trees, water, birds, etc.

Howling wolf tattoos can include an angry, fierce wolf and a calm, peaceful family wolf. This ferocious wolf tattoo is a wolf head surrounded by fire and sharp fans with bloodstains. It could mean a snarling wolf or an alpha wolf. You could also get a wolf pack tattoo with one alpha wolf leading the rest, and howling away looking at the moon. A small howling wolf can also be shown on the edge of a cliff along with a separate wolf on the other end waiting for the howling wolf. This is easily one of the most fierce and cool wolf tattoo ideas.

Tribal Wolf Tattoo On The Chest

This wolf chest tattoo depicts a tribal wolf with Native American feathers across the neck. Feathers are a crucial symbol of Native American culture and history. This tattoo is inked in black and grey. It has been linked through line work style of tattooing.

Tattoos may even represent a pack of wolves or a single wolf. The standard designs usually include a wolf head, a wolf pack tattoo, or a family. It can also have specific floral arrangements around the wolf head or a moon above it.

Want a wolf tattoo that truly stands out? Check out this wolf chest piece tattoo made in 3-D! This wolf seems to be jumping out of the hexagonal background. The hexagons are skin coloured to reveal a different world within and the growling wolf is ready pounce of out it. The realistic wolf design is inked in black and white ink with bared teeth and yellow beady eyes. Some other chest wolf tattoo ideas include a pack of wolves, moon, dream catchers or wolf arm tattoos extending to the neck.

This Neo traditional wolf tattoo creates a haunting look in black and white. The wolf’s mane has black curly lines, hollow eyes, and dark shading. Howling wolf tattoos, snarling wolf, or hunting alpha wolves, as shown here, are commonly preferred wolf tattoos for men. A pack of wolves or a family of wolves is seldom seen as a chest tattoo. You can add a mysterious look by showing a wolf’s head appearing from the smoke or shadows.

Some men and women may even go for a more artistic flair and add some feathers under the wolf tattoo to grab the attention of their loved ones. Wolf tattoo designs are popular among men as they feature wild large animals, but can be adapted by women, as well.

In the realm of tattoos, this one is something else. A wolf head tattoo is superimposed with the wolf’s skull surrounded by its furry mane. Behind the skull, we can see one blue eye. Next to the wolf head is a wolf howling at the moon. The idea behind this chest tattoo is that the chest offers a vast space for the tattoo artist to show his creativity and this opens the door to an incredible variety of designs. Another tattoo idea could be an alpha wolf head fades or merges to form the entire family.

Here are more examples of the best wolf tattoos for men and women to inspire your next one.