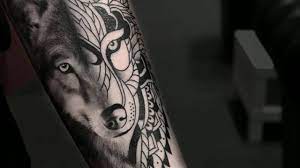 Wolf tattoo designs are extremely popular but a Celtic touch is the icing on the cake. Here’s a list of 10 unbelievable Celtic wolf tattoos that are gorgeous!

Their fierce protective spirit has found several references in pop culture and modern literature. Remember Mowgli and his wolf family?

Wolves are associated with strength, ferocity, courage and pride. They are prominent figures in many ancient cultures and mythologies across the globe like Native American or Celtic. Celtic myths have a strong connection with nature and spirituality. Thus, animal figures are highly regarded.

The wolf is a sacred and noble creature in the Celtic culture. They were considered to be the protector of forests and the night. Many Celtic tribes claim to be descendants of wolves. Even today, it is a spiritual guardian who acts as a bridge between the mortal and spiritual realms. A symbol of guidance, assistance and transformation.

Wolf head tattoos are a popular choice among men, especially because of their bold look. This Celtic Wolf tattoo stands out because of its impressive design incorporating the distinctive Celtic knots that represent eternity. Combined with the wolf head, it is a powerful representation of eternal strength and glory.

A Celtic wolf head is also an icon of values such as loyalty and pride. If these ideals click with you, then this Celtic wolf tattoo is a necessary addition to your tattoo collection.

A wolf’s face is extremely expressive and different expressions relate to different sentiments of the wearer. A snarling wolf head may be an expression of ferocity while a calm wolf face relates to loyalty.

This is another example of an exquisite Celtic wolf tattoo in this category. This tattoo is a safe and rewarding option for those whose priority is to up their style quotient.

The wolf’s paw print is a subtle yet marvellous representation of the wolf. This wolf paw print in Celtic style has many different meanings. It signifies the wolf’s protective spirit. Many men choose to have the names of their loved ones inscribed inside the paw print. The wolf paw is also an icon of the ‘lone wolf’ – a person who personifies strength, independence and confidence.

If you are looking for a subtle, symbolic representation of the wolf then this is for you.

Many Celtic wolf tattoos show the wolf on the prowl as if it is about to attack. In Celtic myths, the wolves were considered to be the guardian of the forest. They moved in packs, protecting the forest against enemies. As such a wolf on the prowl is a symbol of vigilance, protection and guardianship.

This is the perfect tattoo to add to your skin if you relate to the feeling of protecting your loved ones or if you identify as a guardian.

Here is a unique take on the prowling Celtic wolf tattoo. A wolf on each arm is depicted with the sun and the moon, which is an intelligent depiction of the wolf as the protector of the night. More on this in the next category.

Wolves are commonly associated as animals of the night with a special connection to the moon. A common trope used with most depictions of the wolf in pop culture is of the wolf howling at the full moon.

In Celtic culture, the wolf played the role of the guardian of the night. They were believed to eat the sun every day so that the moon could shine at night. The Celts also considered the wolf as a source of lunar power. This artistic Celtic wolf tattoo reinforces the wolf’s role as a protector and represents the mystery vis-a-vis wolves and the night.

Another common design in this category of Celtic wolf tattoos is the depiction of the wolf with the full moon and the blood moon.

A blood moon occurs in the event of a full eclipse and it is a sign of change, cleansing, new beginnings and positive change. The wolf by extension is looked upon as the harbinger of such change. This tattoo is a positive reminder of change and moving forward.

If you are a strong individual who believes in yourself and walks your own decided path then you are a lone wolf. And this intricate lone Celtic wolf of the night tattoo is perfect for you.

The Celtics regarded the lone wolf as a powerful force, capable of tackling adversities on its own.

In nature, lone wolves are wolves without a pack. As such they tend to be stronger and more dangerous than pack wolves.

A lone wolf can act as a spirit guide for people who are independent and self-assured. Who have faced hardships bravely and emerged stronger. Who survive and succeed through their own skills and on their own terms. This tattoo is also an excellent choice for someone who aspires to be such a person.

The wolf’s howl is one of the most distinguishable sounds in nature. It’s a typical element of the wild. The howl is meant for communication with others from the pack and marking territory. It’s a display of alpha strength, which is why it is a prime design among wolf tattoos for men.

A howling Celtic wolf tattoo can represent your connection to your family and friends. It can also signify strength, free spirit and a close connection to nature.

This unique howling Celtic wolf tattoo scores big due to its perfectly geometric art and the bold look that creates!

The Celtic symbol for the wolf represents all the values that the culture associates with the animal. It stands for the spiritual guidance, protection, power and strength that are embodied by the wolf. The colour blue is often used with Celtic tattoo designs as an ode to ancient Celtic warriors who wore blue-coloured tattoos to intimidate their enemies.

Another unique and striking variation in this category of Celtic wolf tattoos. This tattoo design adds earth colours to the contrast with the black ink of the head of the wolf. These colours are meant to signify the connection to nature. But they also distinctly sets this design apart.

As such this is a versatile and adaptive design that can have various interpretations to the tattooed. And it makes for a powerful statement.

The Celtic Tree Of Life And Wolf Tattoo

The tree of life is another distinctive element in Celtic culture. Quite literally, the Celts considered the tree to be an ancestor of men and a gateway to the spiritual realm. The tree represents life and death, longevity and wisdom.

Since wolves played an important role in connecting people to their ancestors and spiritual guides. Hence, they are often portrayed with the sacred tree. This is a strong symbolism of the idea of death and rebirth and transformation.

Tattoo enthusiasts often get this tattoo to remember a dear departed or to represent their belief in the cycle of existence.

The Celts were powerful warriors. And this unique Celtic wolf tattoo is a great tribute to the warrior spirit of the Celtic people. The wolf here is shown with a spear, shield and axe which are common weapons that were used by the ancient Celtic warriors.

Combing several Celtic motifs in one design, this tattoo is a celebration of a person’s Celtic heritage. The Celts were a dominant force in much of Europe until their decline in the wake of Roman invasions. Even so, the valour of the Celts lives on in their folk tales, myths and legends. The wolf is the bearer of the Celtic legacy in this design.

This tattoo is the best choice for people who want to find a way to pay homage to Celtic culture either as descendants or as fans.

Tattoo enthusiasts often choose a tribal style of body art for the sheer look. They have a striking appeal that works for almost everyone. The bold, black-ink style of tribal designs make the Celtic wolf tattoos look different. And this Celtic tribal wolf tattoo takes it a notch higher by incorporating dot work. Dot work is an artistic technique in body art where lines are typically replaced by dots. The finesse is what makes this design stand out.

Another Celtic tribal wolf tattoo that needs special mention is this one that uses all the elements of Celtic mythology in painting a complex scenery that feels straight out of an artist’s exhibition. The Celtic wolf is incorporated in its tribal symbolic form along with the tree of life, the sun, and the blood moon signified by the dash of red. What craftsmanship!

So, that is our list of the best Celtic wolf tattoos out there.

The Celtic Wolf Tattoo is versatile in what it means to its wearer. For some people, a Celtic wolf tattoo is a tribute to their Celtic heritage. Similarly, many people also get a Celtic wolf tattoo because they believe the Celtic wolf to be their guardian spirit. Others, simply get these tattoos as a fan of the Celtic mythologies or because they identify with the animal. Many people are invested in the symbolism of loyalty, power, courage, strength and pride. And some just want a remarkably stunning look for their ink.

A Celtic Wolf Tattoo can cause anywhere between $120-$200 per hour depending on the size, amount of detail involved and the artist.

Some suggestions for Celtic wolf tattoo –