10 Best Celtic Viking Tattoo Ideas That Will Blow Your Mind! 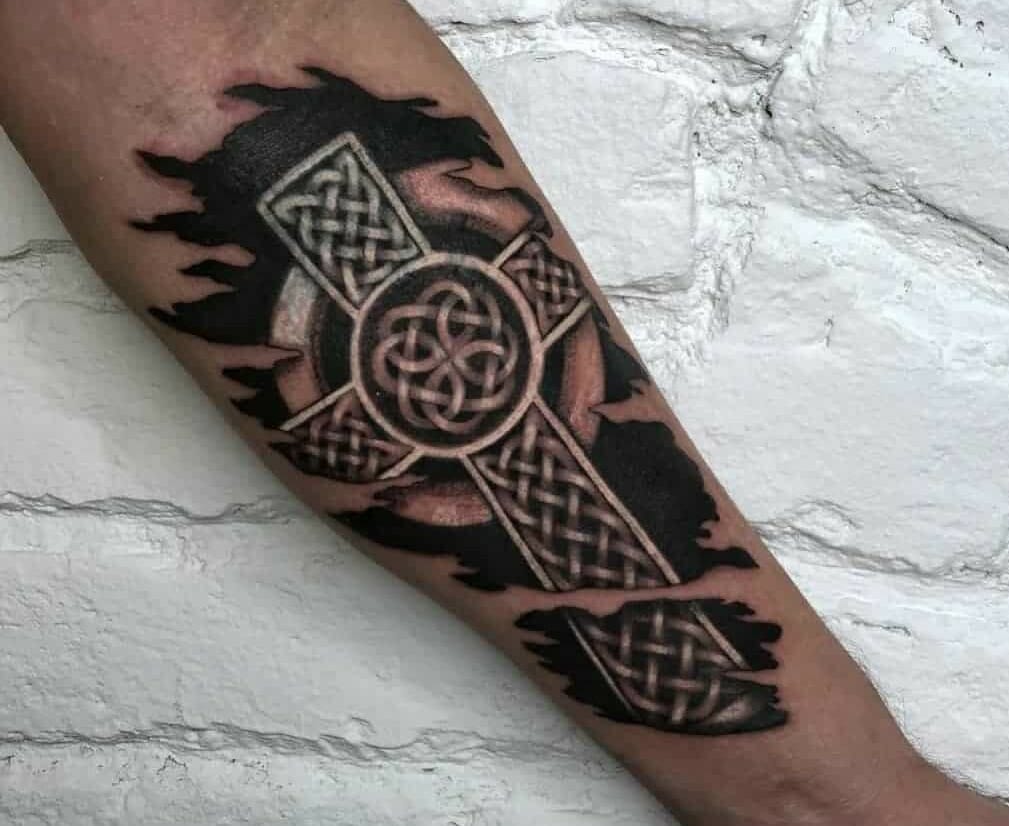 If you like the beautiful Celtic myths, these gorgeous Celtic Viking tattoo designs will be perfect for you and your close ones!

Celtic tattoos have much meaningful symbolism associated with them.

Regular folk, the Vikings believed, moved on to a dark afterlife, while those who perished valiantly in combat went to Valhalla. These heroes’ spirits would be carried away by the Valkyries from the fight.

Many Scandinavian elements may be seen in the Celtic realm. The Vikings had a strong Norwegian impact in Scotland, Ireland, and the Isle of Man. There were invasions documented in Wales, as well as traces of tiny colonies.

This is a very intricate patterned tattoo that has many Celtic symbols strewn about the design. We can see many symmetric and asymmetric designs all over it, including many Nordic symbols, triangles and swirls. It is one of those very beautiful Celtic designs that you can get as a tattoo on your shoulder or leg. With its simple detailing and black ink, it is a very intricate tattoo design you can get tattooed if you like Celtic myths and symbols.

This is one of those designs that are very beautiful because of their many meanings and patterned design. Many popular Celtic tattoos also feature parts of a pattern like this to accentuate the design.

This is one of those very delicate and intense Celtic tattoos that mix patterns and symbols along with an overall picture. It shows a Viking mask that is made up of sharp sword-like lines and swirling patterns. It has references from Norse mythology, and the Celtic cross is also seen here and there in the making of the mask. Norse tattoos are considered very masculine tattoo designs, and the exact meaning of many of them are still unknown. If you like Norse tattoos, ideas like this are great to try out.

The ferocious-looking eyes of the mask, along with the elaborate design involved in the details, make this a very beautiful tattoo. Any tattoo artist will recommend a gorgeous tattoo like this if you are a fan of the Celtic warriors and Vikings.

This is a very unique Nordic tattoo idea. It is made even more interesting with the colour that is seen all throughout the tattoo. There are many Celtic patterns and swirls, all intertwined with each other. The patterns form many symbols that are important in the myths. With the vibrant red and orange colouring, the design often looks like a dragon stretched out over your leg.

The elaborate designs can also represent the holy spirit or god. The symbol of the swirls and the detailed Celtic knots also add a special touch to the design. If you are looking for Celtic knot tattoos or Norse mythology tattoos that heavily feature many a Celtic symbol, this is a great idea for a tattoo.

This is another one of those Celtic tattoos that are filled with intricate patterns. What makes this one stand out is that it forms the shape of a wolf when one looks at it. The wolf looks very strong and ferocious, and it is baring its sharp fangs. It also has its tongue out, looking at the true picture of a fierce Celtic wolf. The wolf has a very symbolic meaning in Norse mythology, and since it is made up of many a Celtic cross and Celtic knots, its beauty increases.

This is a great sleeve tattoo idea, but it can also be tattooed in black ink upon your head. If you have a partially or completely shaved head, this is a great Celtic Viking wolf tattoo to consider. The Celtic Viking tattoo wolf is very powerful and often considered a symbol of great prosperity.

This is a very intricate and detailed Norse tattoo idea. It shows a set of patterns arranged very well and with great care. The overall design could be representing a map or some great event in Celtic history. If you are looking for a Viking Celtic tattoo with a great and rich story behind it, this is a great idea to consider. Even if you are from other cultures, Norse mythology tattoos that respect Celtic history are definitely a great idea. Generally, these designs are tattooed in black ink.

Many ancient Celts may have intended to convey many intricate meanings with beautiful Norse mythology tattoos like this. The circular design that forms the core of the tattoos is an amazing centrepiece to have.

This is another one of those intricate Norse tattoos with a beautiful circular pattern as the core. The design is highlighted due to its vibrant colouring as well. The reds and black really make it stand out, and the pattern of snakes on the outer circle add a very rich vibe to it. It can also be considered as a Celtic warrior Viking shield tattoo, as the design resembles a shield.

The snakes on edge can be thought of like a dragon or modified to resemble the same. They form a simple knot whenever they intersect, giving it a slightly more intriguing vibe. With its subtle nods toward Norse mythology, this is a great Celtic tattoo to consider if you are a fan of the Celtic and Norse myths.

If you like Celtic patterns and Vikings, this is a great Celtic tattoo to consider. It shows a ferocious face of a warrior as an intertwined set of swirls and lines. The overall tattoo looks like a face. The simple Celtic knot that can be found here and there along the face also makes it very attractive to get inked onto your body.

As a simple Celtic cross tattoo that has a detailed design and meaning, this is a great knot tattoo to consider. The fierceness of the face and the general meaning is also very interesting.

This Norse tattoo also has snakes around it, just like the others. The snake can be considered a dragon, as it looks very ferocious and vivid. The simple red colour also accentuates the Norse tattoo a lot. This is a great Celtic knot design to get inked on your arm or leg because of its length. If you like some symbol, then any tattoo artist will recommend a Celtic tattoo like this.

Norse mythology has many callbacks to snakes and other symbols, and the role they play in their stories is very profound. If you are looking for Celtic tattoos with a simple Celtic knot and many a symbol of their myths, this is a great idea to consider getting inked.

This is one of those larger and more detailed Celtic tattoos you can find. There is a very intricate map like the image above it and two birds on the sides. There is also a Celtic crest below it, with a half sword rising from it. This is a symbol often seen in Norse mythology, and it also has a very deep meaning behind it. Celtic tattoos like this are very detailed and beautiful.

If you like Norse mythology and tattoo designs, this is a really gorgeous design to consider. With a Norse symbol tattooed onto your skin, you can feel very strengthened. Viking tattoos like this also have birds like ravens in them sometimes. Celtic Viking raven tattoo designs are very popular. If you want to get a slightly different kind of Norse tattoo, then a triple tattoo design like this is a good idea to think of. With an amazing Celtic Viking tattoo, life can have an extra spark because it gives you that kind of power.

If you want to get very cool Celtic tattoos with Norse mythology intertwined in them, along with a very fierce face in it, this is a really good tattoo idea. This is one of those Celtic tattoos that have a very serious looking face. The warrior is wearing very powerful headgear, and he has vibrant blue eyes. The small pop of colour makes it very interesting. As a Celtic tattoo with such a powerful image, this will look very nice on your shoulder or chest.

Usually, Celtic tattoos have eep stories to tell. Rarely, you will find one that is only a design or a pattern that does not mean anything. They all have great symbolism, and they have very positive ideas. Here are some more Celtic Viking tattoo ideas: