10 Best Tiger Tattoo Ideas You Have To See To Believe! 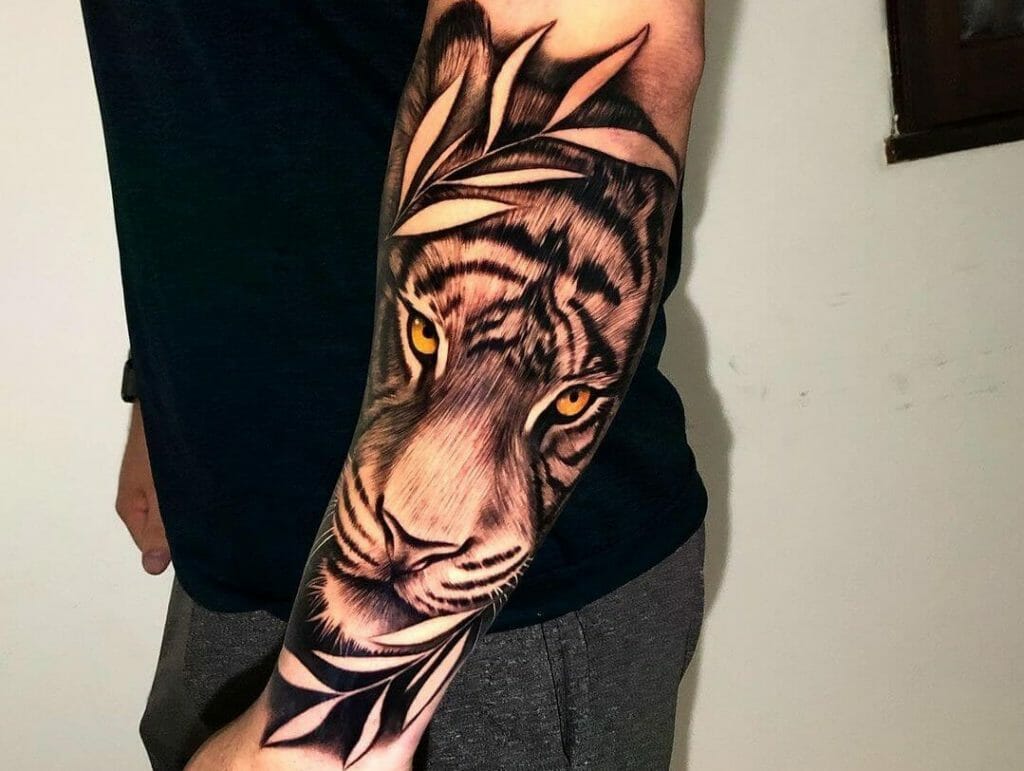 Wanna get a tiger tattoo for its symbolism or your love for them? We’ve listed some amazing tiger tattoo designs for you to check out.

Animal tattoos, be it for people’s love for animals or for what they represent, are quite popular among people all around the world.

The tiger is the largest living cat species in the whole world. Although tigers are currently endangered and on the verge of being extinct, tiger tattoos are still quite trendy for their meanings.

Although the Lion is the king of the jungle, Tigers are known to be lords of the jungle. Tigers are known for the black stripes on their orange-brown fur and lighter underside. The tiger is an alpha or apex predator, and it usually preys on wild animals like deers and wild pigs. It is said that the tiger population has decreased to 7% of what it was in the past. There are still some left in Asian countries like Russia, China, India, Bangladesh, Nepal, Bhutan, Myanmar, Laos, Cambodia, Vietnam, Malaysia and Indonesia. Tigers are majestic creatures best known for their power and fierceness. The Tiger, the national animal of India, has been frequently mentioned in Asian legends and mythology. In Chinese culture, tigers are considered to be a symbol of dignity, ferocity, courage, royalty and many other things. They are also believed to be the protectors of the dead, helping them find tranquillity. Tigers are also often linked to the Chinese god of wealth Tsai Shen Yeh. In India, the tiger is linked to the goddess of war, Durga. Thus, tigers represent divinity and are thought of as elite soldiers in many cultures. In Korea, tigers are believed to fight evil spirits and bring good luck. Tiger tattoos generally represent strength and ferocity as well as liberty and independence. Other than that, the placement of your tiger tattoo could affect its meaning as well. For example, a tiger tattoo on the chest symbolises power and love, whereas the same on the forearm denotes ferociousness and raw power. A tiger tattoo is suitable for people of all ages, genders, and races. So, do not let anyone tell you that a tiger tattoo would not work well for you. Hence, if you wanna pay your tribute to the beast of the jungle and immortalise the species through your tattoo, or if you want a tiger tattoo just for its symbolism, we have got some mesmerizing tiger tattoos just for you to check out.

What could be better to show your respect to this fearsome animal than getting a sleeve tattoo dedicated to it? Other than humans and other tigers, tigers have no rivals within their territories, which makes them the ruler of the jungle. This tattoo of a menacing tiger, probably about to attack its prey, signifies the power and cunning nature of the bearer of the tattoo. With a few tattooing sessions and minute detailing, this tattoo is gonna look dope on anyone irrespective of their gender. All you need to do is find a good tattoo artist for this one.

For this black and red tiger tattoo, the chest would be the best place. This tattoo featuring the entire body of an adult tiger is a perfect tiger tattoo for those girls who believe in personal strength, passion and independence. Although the tiger here does not look frightening, it definitely still looks powerful. This tattoo design, in spite of being small, is very intricate in nature. And small tattoos are usually the ones that need the most amount of detail. More or less, all artists have, at some point, inked a tiger tattoo on someone, since getting a tiger tattoo is a popular choice. But you still might wanna make sure you are in good hands for tattoos like this one.

This is a piece of art drawn in the style used by people in Japan. In Japanese culture, tigers are thought to protect people by chasing demons and diseases away. To the Japanese, tiger tattoo stands for a courageous, long life. Tiger tattoos are believed to bring good luck to the ones who wear them. People believing in the strengthening powers of wearing tiger tattoos gain valour and confidence from them. And the courage you gain from a tattoo, we believe, is encouraging enough for getting that tattoo inked. With a skilled artist and some patience from your side, this tattoo full of symbols will look super cool as an upper arm or forearm tattoo.

The Bengal tiger is the national animal of India. Hence, it is a symbolic portrayal of the rich heritage of India. And so just like getting a tiger tattoo is paying a tribute to the Asian culture, getting a Royal Bengal tiger tattoo is showing respect to the Indian culture. Without any doubt, the Bengal tiger is one of the most majestic animals. The adjective in its name suggests that as well. Bengal tigers are admired for their power, stealth and grace. This tattoo is extremely realistic, which makes it a difficult artwork to recreate. You must find the best artist you can afford for this one. And if you take good care of the tattoo during the healing process, you will undoubtedly rock this one.

Small minimalist tattoos take the minimum amount of money, effort and space. And this tattoo is perfect if you are short on cash, time and space on your skin and still want a majestic creature, a tiger inked on your body. Tiger tattoos represent strength, confidence, protection and independence. For the same reason, tiger tattoos are pretty famous around the world. This tattoo has been beautifully executed with fine and simple strokes of black ink. Despite being uncomplicated in nature, this is one tempting tattoo that would undoubtedly look great on wrists, ankles, and necks.

A lot of Korean art characteristics have been borrowed from Chinese and Japanese art styles. Korean art often features bold lines, sharp angles, and extreme colours and is still acknowledged for its simplicity. Tigers, in Korean culture, are a symbol of strength, power and are seen as the guardian spirits who protect the people of Korea. Tigers are frequently talked about in Korean folktales and children’s stories. The use of the red colour is beautiful and significant in this black ink tattoo. This tattoo of a tiger drawn in Korean style represents the omnipotence tigers are believed to possess by the citizens of Korea.

What could be a better tattoo than that of a cute little tiger cub? Tiger cub tattoos represent the equilibrium between shrewdness and innocence. Baby tigers might have twinkling round eyes, but that does not make them anything less than monster. Just like that, their ferocity does not affect their ability to please people with their cuteness either. And these two qualities are what makes this tattoo unique and irresistible at the same time. But having to put in such minute details in such a small space makes the work difficult for the artist. But if your artist nails this one, they can nail anything. So be wise about your choices.

The drawing style used by people of China gives birth to works of art best known for their beauty. And in Chinese culture, tigers hold a greater place than one could anticipate. Tigers are considered to be the emblem of yang or positive energy that is complementary to negative or yin energy in the Yin-and-Yang philosophy. In China, tigers are believed to be a symbol that fights against household disasters: ghosts, fire and thieves. And they supposedly represent success and achievement as well. The tiger in this tattoo is drawn using the Chinese art style. The usage of flowers, twigs and branches in the artwork is worth mentioning as well. If you can find a good set of hands and a clean tattoo parlour, you will be all set to go for this one.

Siberian tigers, like any other tiger, symbolize bravery, strength, power, and valour. But there is one more quality in them that makes their symbolism a bit different than that of other kinds of tigers. Siberian tigers live in harsh cold habitats, and their fur, longest among all tigers, helps them withstand the extremely cold weather. Thus, Siberian tigers are an emblem of enduring every adversity that comes one’s way. So, getting this excellently complex tattoo inked will not only be all about beauty but will hold great symbolism as well.

The eyes of the tiger are what its prey sees before being attacked and dying. But while referring to the eye of the tiger, we actually refer to the ‘eye’ spots on the back of the tiger’s ears that confuse the predators to reduce the chances of being attacked from behind. And the phrase “eye of the tiger” signifies someone who is intensely focused, confident, cold and fierce. Thus just like the eyes of the tiger is a frightening sight for its prey, a person having all these characteristics is pretty intimidating as well. And if you believe you have these qualities or want a reminder for possessing these qualities, with good care from an experienced artist, this tattoo would definitely be the best option for you.

We are sure that you have enjoyed going through the list of tiger tattoos we put together for you. And we hope that you have made up your mind about choosing or customizing one for yourself by now. Tiger tattoos are rich in symbolism and beautiful in nature. But since getting inked is a lifelong commitment, you might not want to risk it or be unsure about getting the tattoo you have chosen. If you still are confused or have not been able to make up your mind yet, we have got you covered with some more tiger tattoo designs you might wanna look up: