101 Best Pop Smoke Tattoo Ideas That Will Blow Your Mind! 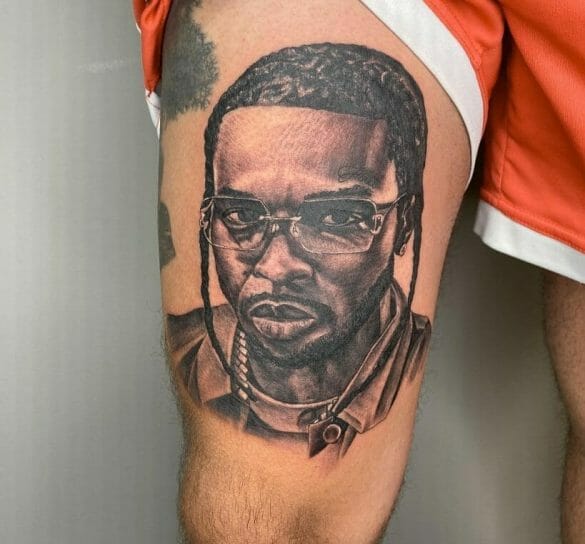 Is Pop Smoke your favorite rap singer? Pay tribute to this fantastic rapper with this list of Pop Smoke tattoo ideas curated for a die-hard fan like you.

Pop Smoke was the stage name of the famous rapper Bashar Barakah Jackson.

After dropping out of school and getting involved in drug dealing, Pop Smoke started his career in 2018. “Welcome to the Party” was his single debut, and it also made to the Billboard 200 along with two of his mixtapes.

This young rapper had a bright future ahead of him, but unfortunately, in a home invasion, he was found murdered in his own house. “Shoot for the Stars, Aim for the Moon” is his famous studio album that was released after his death in 2020. During this short span of time, Pop Smoke gained a lot of fans with his raps. His untimely demise left everyone in shock and despair. Now it’s your time to stop waiting for a sign to get a Pop Smoke tattoo and take a look at the options from the list of Pop Smoke tattoo ideas we have compiled just for you.

This Pop Smoke tattoo features the album art of his studio album “Shoot for the Stars, Aim for the Moon”. In this tattoo, you can see a pigeon holding a rose in its claws. The whole tattoo is in monochrome and the artist used black and white ink. The artist used white ink mainly to highlight certain portions of the tattoo and black ink for the shadings.

This Pop Smoke tattoo features a portrait of Pop Smoke wearing spectacles. The tattoo has intricate detailing and the tattoo artist beautifully did the shading to make the tattoo stand out. You can also see “faith” written on the forehead of the rapper, to match with the “faith” tattoo that he had too. The tattoo artist also brought out the perfect facial structure and expression of the rapper in this tattoo.

You can take your time to mourn the rapper and accept the loss but never lose faith in Pop Smoke. With this tattoo, Pop Smoke will still be alive through his raps in your heart.

The use of white ink to highlight certain features in the tattoo makes the tattoo aesthetic. The content of this tattoo makes it stand out from the list of Pop Smoke tattoo ideas and you should definitely consider getting this one.

This tattoo of Pop Smoke features him at his peak of fame. This full sleeve leg tattoo contains the portrait of Pop Smoke wearing his iconic spectacles, pieces of jewelry, and rings. In the background, the tattoo artist made bars to make the portrait of the rapper stand out. The tattoo also features the studio album name “Aim for the Moon”.

The font and design used in the tattoo make it look more interesting. The content of this tattoo has a bling factor. The tattoo artist creatively used white ink in specific areas to create a shine effect on the tattoo. You can totally get this tattoo if you want to show your love and pay tribute to your favorite rapper.

This beautiful tattoo of Pop Smoke features his portrait as a full sleeve arm tattoo. The tattoo artist gave immense detailing to the tattoo. The rose tattoo on the hands of Pop Smoke is there as well. The tattoo starts with the New York Bridge in the background, then gradually comes the portrait of the rapper, and ends with the stage name, Pop Smoke. The shading of the tattoo is also noteworthy.

This tattoo will also be an experience for you that will be very personal to you. You can come to terms with this painful loss and accept it, slowly in time with this Pop Smoke tattoo.

This amazing tattoo features the face of Pop Smoke. The shading of the shadow just below the face makes the tattoo unique. The tattoo artist did a marvelous job with the shading of this tattoo. The expression of the rapper is caught perfectly in this tattoo. The monochrome tattoo looks like a sketch and the use of the shadings also gives the detailing of the muscles of the tattoo. If you observe closely, the tattoo also features the word “faith” on the forehead of the rapper impersonating the tattoo that the rapper originally had.

The content of this tattoo makes the tattoo look simple, neat, and minimalistic. If minimalism is your style then out of all the options, you can definitely choose this Pop Smoke tattoo because it will be an ideal one for you.

This enchanting tattoo features Pop Smoke facing his back. From his torso in the tattoo, one half is representing the wings of a butterfly, and the other half is tattooed with flowers and leaves in the shape of the other wing of the butterfly. The tattoo artist has also incorporated the tattoos on the hands of Pop Smoke which he had in real life too. The tattoo artist used fine lines to make the detailing of the wing of the butterfly. On the other half, there are beautiful shadings added to the leaves and petals of the flowers. The detailing and shading on Pop Smoke are also tattooed to perfection.

If you want a personalized Pop Smoke tattoo, then you can choose to do this tattoo to pay your tribute to Pop Smoke.

This tattoo of Pop Smoke is a portrait of him where he is holding his two fingers out horizontally to represent the peace sign. The shading of the tattoo brings out the expression of Pop Smoke perfectly and the muscles on his face are also very prominently visible. The tattoo artist has also tattooed the reflection of a shadow on his face.

The use of black and white ink in this monochrome tattoo really brings out its beauty. The content of this tattoo undoubtedly makes it look cool. We have to accept that the detailing in this Pop Smoke tattoo gives the tattoo a realistic outlook. If you decide to do this tattoo then we would suggest getting this done by a professional tattoo artist with experience.

This full sleeve tattoo of Pop Smoke is a portrait of him. The tattoo artist used intricate shading in this tattoo to bring out the best of it. The shading in the hair and face is done very carefully to make it look more realistic. In this tattoo, Pop Smoke is holding both his hands out in a fist and has placed it just beneath his chin. You can also notice the famous rose tattoo on his hand and the “faith” tattoo on his forehead that the tattoo artist incorporated into this tattoo. The rings, pieces of jewelry, and spectacles are also tattooed in a way to match the real-life things that Pop Smoke used to wear. The content of this tattoo is definitely one of a kind. This Pop Smoke tattoo is the best way to pay respect to one of the best rappers of that time.

This tattoo is undoubtedly a piece of art. It features the portrait of the famous rapper perfectly, along with it it is the quote “Never Trust”. The word “Never” is written on the top of the tattoo and the word “Trust” is written at the bottom of it. The shading and detailing of this tattoo are also noteworthy.

If you notice closely, you can also see the tattoo artist incorporating a crack at the side of the word “Never” with fine lines and shadings. The font used for the words also makes the tattoo stand out from the rest. This is a sign for you to get this Pop Smoke tattoo on your skin and show your love and faith for Pop Smoke.

If you are still searching, then there are more options for the perfect tattoo to pay your share of tribute, then you can also check out the list below to choose from.

What does the tattoo of Pop Smoke mean?

The tattoo of Pop Smoke has become an iconic symbol for his fans, representing both his music and his legacy. The tattoo features a black panther with two gold guns crossed in front of it, which was the cover art for the late rapper’s posthumous album, Shoot For The Stars Aim For The Moon. According to Pop Smoke’s Twitter, the tattoo is “a reminder to always remain vigilant, stay dangerous and shoot for the stars.” The symbol has been immortalized in tattoos by many of Pop Smoke’s fans, who view it as a tribute to their idol and a way to honor his memory. It also serves as a reminder for them to stay focused on their goals and always strive for the highest heights. Pop Smoke’s tattoo is a fitting tribute to his life and career, embodying the idea of never giving up in pursuit of one’s dreams. It is a powerful reminder that even though he may no longer be here, his spirit remains alive in our hearts and minds.

How many tattoos does Pop Smoke have?

Pop Smoke had a total of nine tattoos. These included the black panther with two crossed guns, which appeared on the cover of his posthumous album Shoot for the Stars Aim for the Moon. He also had a rose tattooed on each hand and forearm, as well as a portrait of his mother that covered one side of his chest. Additionally, the late rapper had a “PS” logo, a tribute to his hometown of Brooklyn and an angel on his neck. He also had two tattoos dedicated to God—one with three crosses and one with the words “God is Great.” Finally, he had what appears to be a quote from Proverbs 16:18 tattooed on his arm. These tattoos all serve as a reminder of Pop Smoke’s legacy and the impact he had on the world.

How long did it take to get the tattoo of Pop Smoke?

The exact amount of time it took to get the tattoo of Pop Smoke is unknown, but it likely took multiple sessions to complete. Tattoos can take anywhere from a few hours to several days to finish depending on their size and complexity. Additionally, tattoos often require touch-ups in order for them to last longer and look better. Therefore, it is likely that the Pop Smoke tattoo took several sessions over a period of time to complete. However, regardless of how long it took, the tattoo is now an iconic symbol in memory of the late rapper and his legacy.

How much did the tattoo of Pop Smoke cost?

The cost of the tattoo of Pop Smoke is unknown as many factors can influence the price. These include the size and complexity of the design, as well as where it is placed on the body. Additionally, experienced tattoo artists often charge more than inexperienced ones. However, in general, tattoos can range anywhere from a few hundred dollars to several thousand depending on the artist and design. Ultimately, regardless of how much it cost, the tattoo of Pop Smoke is a powerful symbol that will continue to be cherished by many for years to come.