10 Best Moogle Tattoo Ideas That Will Blow Your Mind! 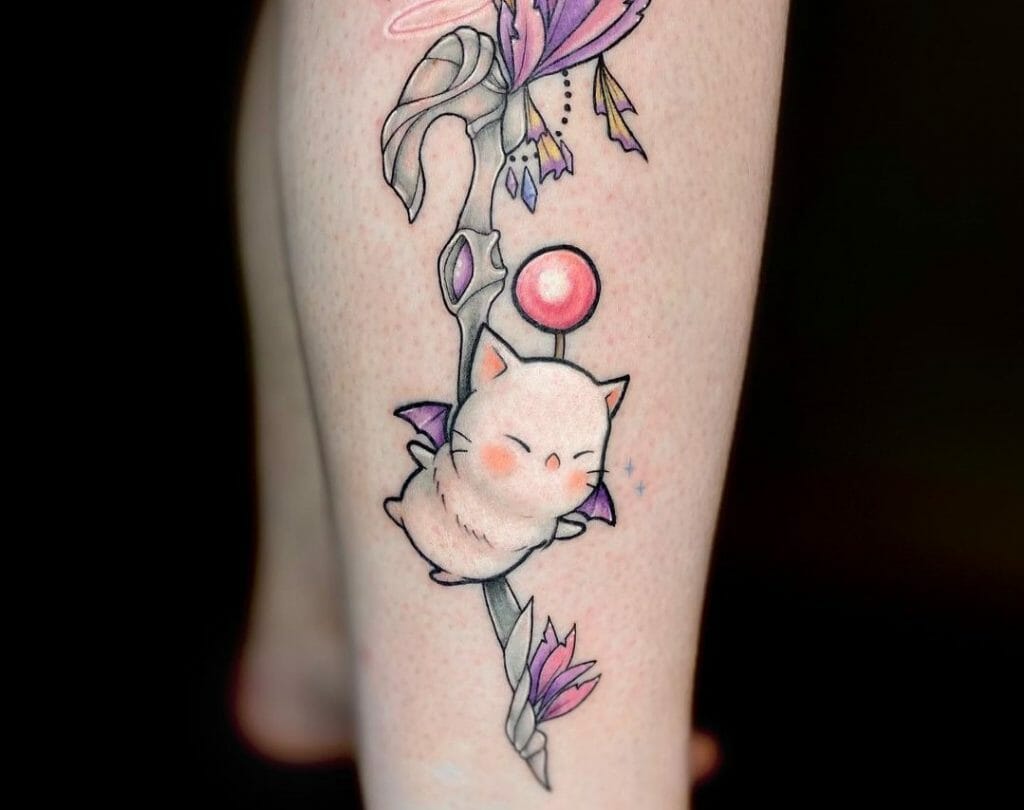 Want some awesome ideas for Moogle tattoo designs? Look no further! We have created a list of the best Moogle tattoo ideas that you will definitely like!

Moogles are a popular fictional race of creatures from the Final Fantasy franchise.

Since 1994, Moogles could speak and started becoming incredibly popular. Moogles have also appeared in spin-off games such as Crystal Chronicles and Final Fantasy Tactics. These fictional creatures have stolen the hearts of many since the 90s and even to this day, the Moogles are mascots of the hit game franchise. One can even remember Moogles running the Synthesis workshop in Kingdom Hearts, a game created by Walt Disney and Square Enix together. Moogles were one of the few fictional beings that were imported into this game where there was a mixed universe featuring characters from both these companies. Moogles have been depicted as furry in some games and having a smooth body in a few games, both appearances being equally cute. They have cat-like faces and tiny bat wings. They also have a large red nose and cute ‘neko’ ears which makes them even cuter. If you like cute tattoos of furry creatures or just FF tattoos in general, you will definitely enjoy this curated collection of Moogle tattoos.

This is an incredibly cute Moogle tattoo featuring a Moogle wearing an R2D2 suit. Instead of the antenna with a red pompom attachment on its head, like other Moogles, this Moogle has a robotic ball connected to its antenna. These kinds of tattoos are very popular among younger people who wish to get Final Fantasy tattoos.

This is a brilliant example of a well-drawn tattoo. It is a very minimalistic tattoo with very subtle colouring, however, the details and shading are amazingly handled. This Moogle tattoo almost has been brought to life with the efforts of the tattoo artist or it feels like it is straight out of a manga.

This particular tattoo features a completely white Moogle who appears to be travelling somewhere. Generally, Moogles have tan bodies and a red pompom on their head, while this one has a yellow pompom and a pale body. This Moogle is also furrier than other Moogles and appears to have a band-aid on it.

This is another example of a super cute Moogle tattoo. This is a chibi Moogle with a heart-shaped pompom instead of the ball we generally see. The tattoo is made to be even more beautiful using the flowers around the Moogle and the light shading of pink and purple.

This tattoo is straight out of the 90s Final Fantasy games and will remind everyone of the ‘Save Game’ menu in the popular RPG game. This Moogle has been tattooed brilliantly along with its wings, furry body, red pompom and wings, appearing to be ready to save the game for you.

This tattoo features a Moogle that by its appearance, seems very naughty. This is especially due to the cute but naughty smile on its face and the blue aura around the creature. This Moogle also appears to be waving at someone.

This is another example of an extremely cute Moogle who has an incredibly fluffy torso and beautiful thick fur on its chest area. Generally, Moogles have extra fur on this area of their chest, but this Moogle looks exceptionally cute due to the miniature wings, fluffy bodies and absolutely adorable eyes.

This is an incredibly minimalistic Moogle tattoo featuring a completely unfilled Moogle tattoo with a rectangular background and with only the pompom being coloured red. These kinds of tattoos are simple and go well in almost any part of your arms or even your back.

This is a beautifully made Moogle tattoo and most tattoo fans will absolutely love this tattoo. Final Fantasy fans love Moogles and any fan of this amazing game from Square Enix will love any tattoo similar to this. This kind of artwork is appreciated by those who read a lot of manga as well. This particular Moogle also has a bit of fur on its belly, making it look incredibly cute too.

This is an extremely well-made tattoo of a Moogle and a Chocobo. They are both recurring creatures in the series and are incredibly popular. The FF franchise uses these two animals extensively to serve relevant ads to FF fans and for updates on their site. The Chocobos are yellow chicken-like creatures. The FF site features more information about Chocobos.

If one wishes to get a Final Fantasy 9 tattoo or an FF7 tattoo, getting a tribal Moogle tattoo or buying a Moogle Final Fantasy tattoo sleeve is a great idea. Final Fantasy Moogle tattoo designs are incredibly popular around the globe this cute flying mammal-like creature is appreciated by people who are not fans of the game. One can learn a lot from FF. The game teaches the concept of hope and not giving up as well. For an artist, the game can provide much-needed inspiration while other games featuring similar technologies either do not have great content or design. Due to the language in the game, the RPG provides a safer experience to children as well. One needs to learn how to use the tools available inside the FF world in order to visit various locations and battle enemy parties throughout the game. It is a turn-based game and the controls are quite fun. There are many magical items, weapons and tools one can use in this game as well. The storyline and the content are incredibly addictive in this game and one can even choose to use any scene from the game based on the relevancy of the scene for you.