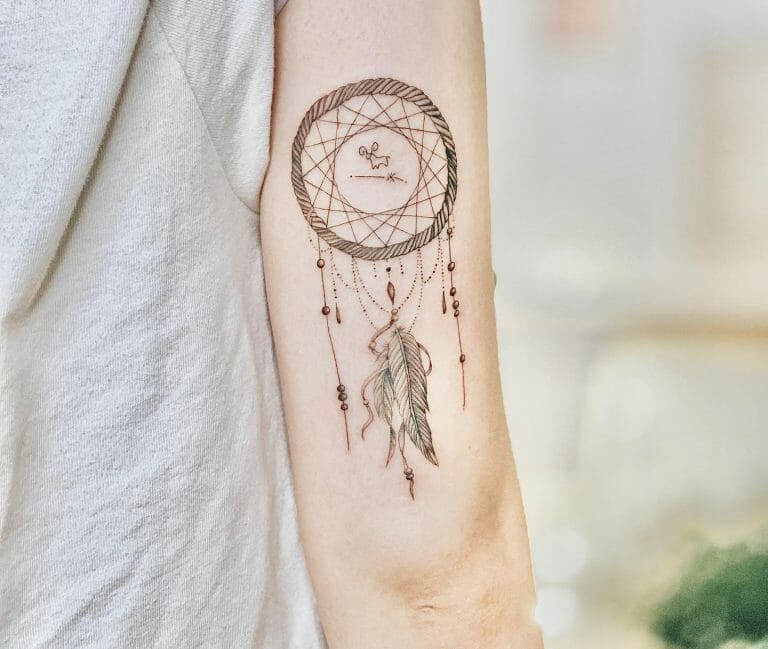 If you believe in astrology and are a fan of constellations then the girly Capricorn sign tattoo is a perfect choice to show your faith and fashion.

Of the twelve zodiac signs in astrology, Capricorn is the tenth sign on the chart.

The sign has been taken from the constellation Capricornus, the horned goat. Regarded as one of the four cardinal sins the planet Saturn controls the Capricorn.

If we track back to the Babylonian and Akkadian mythology we will find a creature with the tail of a fish and the head of a goat who was the god, Enki. This is exactly how Capricorn is portrayed in the astrological chart.

But from the perspective of Hindu astrology, the Capricorn is not a sea goat but rather a Makara or crocodile. It is also celebrated on the day of the Makar Sankranti Festival. Be it in the Western or Eastern culture the Capricorn tattoo has become very popular due to its astronomical values and magnificent attire.

The design can be done in a variety of ways like a girl figure fused with horn goats, a half girl, and a half-goat face, a girl and a goat face with the Capricorn sign, and many more such ideas can be infused into the tattoo design. The best areas to put them are on the forearm, thighs, calves, chest, bicep, and back.

These Capricorn tattoos are quite unique and have a connection with Greek mythology. The sea goat tattoo is actually associated with God Pan who is the ruler of woods, flocks, and shepherds. But as the earth signs rule the Capricorn in astrology it is also associated with the progeny of mother nature Goddess Persephone.

These Capricorn tattoos blossom extremely well in the forearm, calves, shin, back, chest, and thighs. Not only the grounded nature of the woman is portrayed with this tattoo on their skin but also shows the feminine power of the Goddess associated with it. The tattooer can also show their love for Greek mythology by fusing this concept in this astrological tattoo.

Many women like to celebrate the constellation sign under which they are born and hence the Capricorn constellation tattoos have become extremely popular. People who are born between December 21 to January 20 mostly get this tattoo done by a tattoo artist by putting the stars in alignment with the Capricorn symbol.

These actual constellation tattoos take up quite a small space and can be done in sensitive areas like the shoulder bone, neck, back of the ear, ankle, and below the belly button. The holder of this zodiac sign tattoo radiates the characteristics of ambition and is a hard worker who likes to climb financially upwards in life just like a mountain goat trying to reach the mountain top.

The tribal girly Capricorn tattoo is fairly a new concept but is gaining popularity around the world. In the tribal culture, the goat is considered to be the symbol of power and balance and is known for its magnificent ability to climb mountains. It needs extreme precision and hard labor to climb such tough terrains and this trait is very much found in the people born under Capricorn.

These Capricorn tattoo ideas are often fused with a dreamcatcher, feathers, flowers, and many such tribal things to add depth to the tattoo design. The best place to put these tattoos on the body is the forearm, back, chest, bicep, and thighs.

These Capricorn tattoo designs are extremely soothing and are mostly associated with the pansy flower. Pansy can be both found as a garden flower or a wildflower and thrives mostly in the cooler parts of Europe and Asia. But its growing nature does not limit it to the cooler parts and its hybrid variety can be found around the world in a variety of temperatures.

Just like the trait of the pansy the Capricorn zodiac sign tattoo holder can thrive under multiple conditions and will emerge victorious with their hard-working and ambitious nature. These Capricorn tattoos range from medium to large and can be placed on the thighs, calves, forearm, bicep, back, and chest. The ink choice can be traditional black or other vibrant colors can be used depending on the choice of the tattooer.

In the Sumerian civilization, the God of wisdom was depicted with the head of a goat and the tail of a fish. It almost looked like a mermaid with a goat head. Later in modern times these two signs became associated with the Capricorn star and the sea-goat tattoo idea was also imbibed in the tattoo industry.

For its association with the God of wisdom people born under Capricorn are often considered to be intelligent, committed, and hardworking. When you will see this tattooed on someone you will immediately understand their personality traits. They can be fused with other elements like the sun, moon, earth, and Saturn for further effects and varied meanings.

The Capricorn symbol tattoo is a zodiac sign which almost looks like the alphabet ‘N’ with an infinity symbol. This design idea is mostly small in stature and can be done by using traditional black or colorful ink by a tattoo artist. The best place to put these Capricorn tattoos is on the ankle, wrist, finger, forearm, neck, back, and shoulder.

Done in a complex design pattern these Capricorn tattoo ideas are etched in the form of abstract art on the skin. Colorful inks are mostly used for these Capricorn tattoos and are placed mostly on the forearm, bicep, back, chest, thighs, shin, and calves. Multiple geometrical shapes can be used to ornate this sea-goat tattoo.

Now each shape has its own meaning and the tattooer gets tattooed depending on their characteristic traits. When a circle is used with this Capricorn tattoo it reflects the endless cycle of life, a triangle shows the strength, creativity, and harmony associated with Capricorns, and a square demonstrates the truthfulness and grounded nature of the tattoo owner.

Numerals are one of the most important elements of calculation in astrology. Using it with a Capricorn tattoo design is quite natural and a great way to represent certain ideas. These Capricorn tattoos can range from small to medium in stature and can be done on the forearm, wrist, thighs, back calves, chest, and shin.

The two elements the numerals and the Capricorn symbol depicts mostly the birth date of the tattooer which lies between December 21 to January 20. With this sea-goat tattoo, one can also represent the lucky number one has for their charm. The numbers can be either written in Arabic or Roman numerals and totally depends on the tattooer.

These Capricorn tattoo ideas are based on the concept of realism that was invented as a medium of the art technique in mid-nineteenth-century France. This sea-goat tattoo is done using heavy shading of colorful ink and almost looks like a photograph.

The best places to put these Capricorn tattoo designs are on the forearm, bicep, shin, back, chest and thighs. The realistic girly Capricorn tattoos are extremely charming and it is hard to keep an eye away from them which is quite similar to the tattooer who is born under the Capricorn zodiac sign. With their work ethics and commitment, they will never fail to charm you.

Other than the Capricorn tattoo people with other star signs get tattoos of Aquarius, Scorpio, Taurus, Aries, Virgo, Leo, and many more. The concept of astrological tattoos has become so popular that they are even being done by celebrities like Rihanna, Demi Lovato, and Cara Delevingne.

Other girly Capricorn tattoo ideas that can be done are: