10 Best Medieval Tattoo Ideas That Will Blow Your Mind! 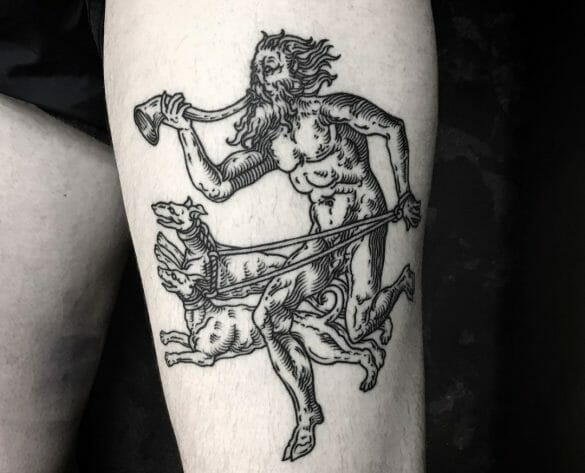 Want to go back to hundreds of years but can not do that because of the lack of time machine? Check these medieval tattoo designs which would take you there!

The history of the tattoo goes long way back and we can find different types of tattooing throughout history, and the terminology of the word tattoo has its own history too.

The word tattoo has originally come from the Samoan word “tatau” and it was believed that Captain James Cook was one of the first ones to use the word “tattoo” in the English language. But scholars have since debunked this myth, and now in the scholarship of tattoos, its origin is still a point of debate.

Razzouk Ink, a shop for tattooing, exists in Jerusalem and the practice exists for a long time, dating back to 1300. even the ones who have travelled reported that the signboard outside the shop marks the words “Tattoos with Heritage since 1300”. The Razzouk family started this tradition of tattooing medieval history, myths and legends for Christian pilgrims in Egypt and then in the Holy Land of Christians for religious pilgrims. They had started this custom with Coptic Christians. Tattooing human skin is a custom that blends memory as well as reminds us of the advancement of technology. In this type of tattoos, we will see how tradition and style interject each other, and result in a beautiful product.

A Norman jongleur (which would mean a minstrel- an entertainer) who travelled to England and took part in the Battle of Hastings. History tells us that he sang the epic poem The Song of the Roland while juggling his sword- and that has been tattooed on the arm in this picture. The tattoo is extremely intricately painted, especially the chain mail on the knight’s uniform.

The flail was used during the middle ages, it was mostly a weapon of the peasants. As clearly evident from the tattoo, a flail consists of a head that is attached to a chain or rope. The artist, in this case, drew a skeleton in the place of the head. The head of the skeleton has spikes. The tattoo is very realistic. The process of tattooing has not ripped off the minute details from it.

This is one of the animal tattoos, which are also common in the context of medieval tattoos. The Griffin usually has an eagle as its face, but the back of the Griffin changes according to the mythology. In some cases, the Griffin has a lion’s body as its body but it can be of some other animal as well, like this one. The shades are extremely perfectly done in this tattoo.

The image of a Greenman signifies re-growth. The face of the Greenman is covered with leaves, symbolizing the spirit and freshness and vitality of greenery. In myths, we know of characters who wear leaves on their face and give out the message of life. This is one of those images very commonly found in walls of churches, and hence have become one of the common images amongst medieval tattoos, as these tattoos were common amongst a family or a person going for pilgrimage.

Historically, tattoos worked like symbols of a variety of things- it was used to refer to slaves, it was used to refer to soldiers in the army etc. Knights were a common figure during medieval times and this particular craft is an intricate painting of a wounded knight who has been attacked by arrows but is still able to pull up the sword as if trying to attack, which marks the medieval spirit

This tattoo is like a different version of the previous tattoo. The picture shows a knight, wounded by arrows, and he is still carrying his sword as well as his shield. The letting of blood and pain that one experiences while trying to get tattoos to mark their sacrifice to God as they get themselves tattooed while going for a pilgrimage. The clothing of the knight is finely drawn here.

The Weapon From Medieval Times

Amongst medieval tattoos, the weapon is also one of the recurring pictures. Although whether there actually was any Viking who had tattoos, we don’t know for sure. Scholars are divided on these due to the lack of evidence. However, there is evidence from Ahmad Ibn Fadlan, in whose writings we can find one mention of tattoos during the time of Vikings. In this one, there is a palm holding the weapon. These weapons were used in battles and may or may not have also been used for punishment. The weapon consists of a head with spikes and is different from the flail.

The lion with the wings- a famous mythological creature. The bodies of these creatures are that of lions but they have wings as well. Some say that they differ from Griffins as they do not have the face of an eagle but some say that they are a different type of a Griffin. In this picture, the lion seems to have got a crown to it and the artist has tattooed the whole thing quite well and with delicate finesse.

Medieval knight tattoo designs are quite common while looking for tattoos with medieval symbols. In this picture, artist or artists have chosen to show the whole process of tattooing. We can see that the face is that of a skeleton but the exterior is of a knight, so we can assume that this is probably a dead knight as the uniform of the knight has burnt, and it definitely crosses our mind that this fire is probably fire of Hell.

During the later phase of the Middle Ages, Hundred Years’ War took place where Joan of Arc aka Maid of Orleans played an important role. This tattoo of the saint-like figure of Joan of Arc is finely painted, the circumference of the halo structure looks as if it has been painted with the help of a compass.

But this is not at all the end to Viking tattoos or Christian tattoos’ ideas. We have many more suggestions for you to design your arms: