101 Best Matching Anime Tattoos That Will Blow Your Mind! 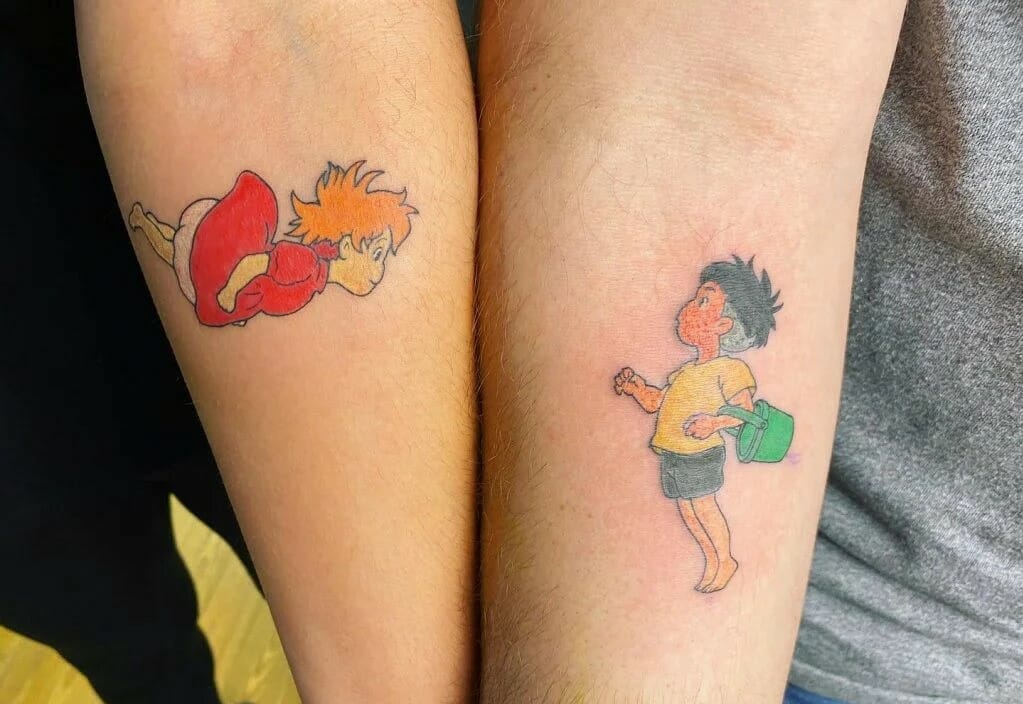 If you love anime and want to ink matching anime tattoos with your partner, then here are some of the best tattoo ideas you should definitely check out.

Anime in Japanese culture is a mode of television entertainment.

Many countries produce animes, but Japanese animes are considered the best. Anime is a vital and undetachable part of Japanese culture.

In case you are new to the world of anime, then while growing up or even now at least you must have heard a few popular names like Naruto, Kakashi, Kira, etc. these are some of the most famous characters in Japanese anime. Japanese anime series are famous in the world, and also well liked by people all across the world. Animes have been growingly famous in this era and the quality has also drastically been changing. But have you ever wondered about the origin of anime? The timeline of the first-ever anime can be traced back to 1961. Since then the animes have been constantly evolving, this includes both storyline and art design. The few famous long series are ‘Naruto’, ‘Bleach’, and ‘One Piece’, with ‘One Piece’ being one of the longest ones ever that is most loved by millions across the world.

Anime fans generally connect with each other without having trouble, they can connect easily because they always have a common topic or interest to talk about. Anime tattoos are also one of those reasons which help a fan connect with other fans without problems. And people generally carve anime tattoos to pay tribute or respect to their favorite characters. There are thousands of anime tattoo designs that surpass one another, and always help ignite the fire in conversations between fans.

If you are an anime fan who belongs to one or maybe several anime fandoms and have been looking for matching tattoos for couples, we have just the perfect matching anime tattoos for you and your crew.

Naruto and Hinata are both anime characters belonging to the famous long anime series called ‘Naruto’, these two characters have a romantic relationship in this series in the beginning and later they even get married. There are a lot of fans who ship these couple really hard. This anime tattoo has been inked on the hand of the bearer. Hinata’s eyes have been filled with white color which shows the authentic representation of the anime, as it reflects Hinata’s ‘Byakugan’ from the series and it looks exactly the same as the tattoo. The blue eyes of Naruto also look as catchy as it looks in the anime. Naruto’s face has been drawn inside a ‘kunai’ which is a tool for ninjas.

If you are a married couple, or just any couple in love with each other and Naruto as well, and are looking for matching anime tattoos, then without wasting any time you should choose this anime tattoo with one of the most loved anime power couples.

The anime character named Goku is a protagonist from a famous series named ‘Dragon Ball Z’ and he has an infamous best friend name Vegeta. These two characters Goku and Vegeta are also famous for their rivalry. As they both are also best friends as well as rivals this anime tattoo holds a deeper personal meaning behind it. This anime tattoo is a colored one and is placed on the calf of the tattoo bearer. As it is shown in this anime tattoo that both characters are walking away, fist-bumping one another, and giving us true friendship vibes.

If you also have a best friend who you could also hit for free just because you love them a little too much, then spare no time and get this anime tattoo done on your body, as these types of matching anime tattoos suit best on best friends.

This is an anime tattoo of two famous anime characters, the boy featured is Natsu and the woman’s name is Erza, they both are from an anime series named ‘Fairy Tale’. Natsu is the main anime character of this series. Between Natsu and Erza there is a pure senior and junior or elder sister and younger brother relationship. In this tattoo, the big eyes of both the characters are filled with many emotions. Because these kinds of subtle anime tattoos tend to have intricate details, we would recommend you to get an experienced tattoo artist because only an experienced artist can draw something like this with perfection.

If you love this fantasy magical series and searching for tattoo ideas, consider your search has finally come to an end.

This anime tattoo is a snap from the anime movie named ‘Ponyo’. The girl featured in this tattoo is Ponyo, and the guy’s name is Sosuke. This meaningful cute anime tattoo is a colorful one, with an authentic depiction truly resembling the anime. These small anime tattoos are inked on the hands of the tattoo bearer. As we can see in this anime tattoo, the girl is flying while the kid seems to be waiting for her perfectly representing their chemistry. This tattoo is one of the most fabulous tattoo ideas that will always stand out the most because of the unique art style.

If anime movies have a special place in your heart, and you are hoping to find a perfect anime tattoo to devote your passion to it, then you should definitely check this perfect tattoo from an anime movie called ‘Ponyo’.

This simple anime tattoo is inspired by the famous series named ‘Naruto’. This tattoo belongs to one of the most popular anime villain groups named ‘Akatsuki’. If you have watched this anime, then you must know the importance of Akatsuki in the anime series and must have already had a close to goosebumps experience just by looking at this tattoo. Among all the anime tattoo ideas, this particular tattoo design is one of the most sought for. This anime tattoo inspires a lot of people due to the deeper personal meaning of the characters behind it.

If you like badass anime tattoos, then let’s all agree that the scale of badassness of ‘Akatsuki’ is unmatchable, and nothing can beat small anime matching tattoos like this that we have brought here just for you.

This adorable anime tattoo is one of the many anime tattoos which can easily be considered to be the most adorable one. This is a tattoo of Goku and and his wife Chichi from the famous anime ‘Dragon Ball Z’. This couple teach us many inspiring lessons like how understanding, caring, and open-minded is essential in a relationship, which is why this anime tattoo is really meaningful. This tattoo has been drawn on the hand, and in this tattoo, Chichi and Goku both are kissing each other. You can also notice the dragon balls flying around them making this tattoo a really romantic one.

This couple is a popular choice among the Dragon Ball Z fans and if you are one of such powerful couples, then we would suggest you to ink this gorgeous tattoo idea on your body.

The titular character of the anime series ‘InuYasha’. This cute tattoo represents the chemistry between the characters and screams perfection. Although image shows just one person getting it, this still makes a great couple tattoo idea. You can either get a tattoo featuring both the characters or just one character on each of your bodies. This tattoo looks exactly the same as it does in the manga. Everything about the detail is just perfectly tattooes and looks the same, if you have watched the anime or have read the manga, then you can easily notice that.

If you are an old-school anime fan and admire this form of art style, then you most definitely can enjoy the authentic tattoo on your body.

It doesn’t matter even if they are not from the same anime, these two characters have made sure to be loved by everyone. Mirio Togata, or as known by his hero name Lemilion, is an anime character from the popular series ‘My Hero Academia’ and Nezuko, on the other hand, is from ‘Demon Slayer’. The artist has made these two colorful anime tattoos absolutely stunning.

If you and your partner love different characters but still want to get matching tattoos, we have got that covered. Choose a similar theme and then who cares if the tattoos are from the same anime, you guys can still twin!

Nothing can beat the brotherly relationship between these two. Believe us or not, these two characters from the anime series ‘One piece’ have the perfect chemistry between them. These anime tattoos signify the strong bonding of brothers and depicts the true power of friendship.

If you love the anime series ‘One Piece’ and want a tattoo to get with your best friend, this tattoo is the one for you!

The grace and power these two characters portray, no wonder everyone ship them so bad! These two tattoos features the two Hashiras from ‘Demon Slayer’ characters. These anime tattoos have completely captured the perfect details of Giyu and Shinobu. The color of their eyes in these anime tattoos is also as authentically tattoed.

If you and your loved one are a ‘Demon Slayer’ fan and searching for a not-so-basic anime tattoo ideas to show your love for the anime, then this tattoo is the one!

We bet you must have one of your favorite matching anime tattoos for best friends and couples. However, if you still want to keep looking for more inspiration, you can easily find them on social media sites like Instagram and Pinterest.

Still looking for inspiration, then checkout this blog post about naruto tattoo.

Still looking for inspiration, then checkout this blog post about tattoos that will blow your mind.

What are some matching anime tattoos?

Anime tattoos come in all shapes and sizes, allowing for a variety of matching styles. Popular anime characters like Naruto, One Piece, Dragon Ball Z, Sailor Moon and Attack on Titan are often featured in matching pairs. Other popular options include female-to-male duo images of characters from certain series like the popular Studio Ghibli films or characters from popular games like League of Legends. Matching anime tattoos can also be done in a variety of styles, such as watercolor, traditional Japanese art, minimalist designs and more. For those looking for something unique, there are custom-made tattoo options that allow you to design a unique set together with your partner. No matter what style you choose, matching anime tattoos can be a great way to show off your love for each other.