10 Best Maleficent Tattoo Ideas You Have To See To Believe! 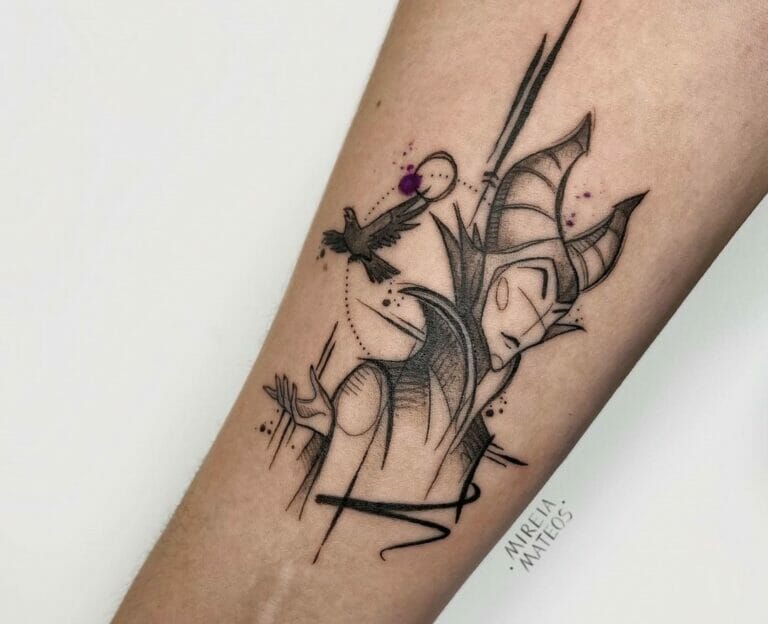 Here are 10 best maleficent tattoo ideas for all Disney movie buffs and Angelina Jolie fans. Read to find out top tattoo designs of your favorite movie.

Maleficent (2014) is considered the darkest of Disney movies and rightly so.

A new twist was put on the story of Maleficent by narrating the perspective of Maleficent for Princess Aurora. It is a tale that highlights the purest form of love.

Maleficent tattoos have become an iconic tattoo design idea since the movie came in. Jolie is the biggest inspiration behind the Maleficent character as the fairy godmother. The first part of this fantasy film released in 2014 and the 3D sequel of the movie series came out in 2019. Disney themed tattoos, like Sleeping Beauty, Maleficent and Ursula tattoos have become quite popular in recent years. You can recreate the magic of the Disney universe and their stories with these wonderful tattoo designs. Cast members, including Jolie received lots of praise for their performance and there is a possibility of the third film too. So, if you want to gear up for the ultimate sequel and show your love of this Disney film, here are some tattoo design inspirations for you

The beauty of art is that it diminishes the difference between good evil and bad evil. This maleficent tattoo depicts an evil fairy godmother, a character from the tale of Sleeping Beauty, who has appeared in multiple Disney movies. Black color is always said as a standalone color, this statement is proved correct by this tattoo design which is rich in black ink. Apart from that, the detailing given by the artists with purple and yellow color is commendable. This new tattoo design is best suited for your arms. You may also creatively design it around your legs and calf.

This tattoo depicts the fire-breathing, dragon form of Maleficent. The art piece shows us a maleficent tattoo design of a purple dragon and a huge flower in the center. The colours used in the tattoo are dark and bold, just like the character it represents. Your arms and legs are best to get this tattoo design inked.

This amazing portrait of Angelina Jolie from the Disney film maleficent has a deeper meaning attached to it. In contrast to the movie’s usual colour palette,  this tattoo is done entirely in black and looks like a sketch. With smooth strokes to highlight the facial features in this maleficent design, it mirrors the bold attitude of the character played by Angelina.With elements like the magic staff and crystal ball, this tattoo covers the entire arm, making it the perfect place to get inked. You may also try out a Maleficent temporary tattoo if you are unsure of the placement.

This gripping portrait tattoo of Maleficent is sure to attract attention wherever you go! Inked in black and grey colours, this tattoo has a monochromatic look and creates a dripping, watercolour effect. The fierce glint in the eyes make this tattoo design striking to look at and add lots of depth to the design. Here we see the tattoo inked on the upper thigh, since it offers a better canvas. But you can also recreate it wonderfully on the arm, back or chest.

Maleficent’s wings initially symbolised the freedom and power of this fairy godmother. However, once she loses the ability to use her wings, her freedom is cut short and she is forced to walk on land. Placed on the arm, this tattoo beautifully highlights the dense, thick feathers of Maleficent’s wings. This maleficent tattoo shows the sleeping beauty princess Aurora with wings and horns.If you want an elegant maleficent tattoo design that sparkles, then you might want to consider this design.

This maleficent design can make you believe in magic! The black color used in this design along with a fine white border gives it a polished look. This tattoo shows Maleficent armed with the magical scepter, next to her pet accomplice, Diablo. In this tattoo, black ink is used beautifully to evoke the dark magic aspect of this character. This tattoo would look great inked on the arms or legs.

Here are some Disney-themed tattoo sleeve ideas. This is a portrait of the animated Disney character, later played by Angelina. This maleficent tattoo depicts the human form as well as the battle-ready dragon form of the character. The bright colors highlight the intensity of this tattoo. Arms are the best place for maleficent tattoos of this size.

‘Burning into flames’ is the thought behind this maleficent tattoo design. The blazing flames around the tattoo mirror the fire in Maleficent’s eyes. With flames of purple and yellow, and a bright red rose at the bottom, colours seem to play an important role in this captivating design. The chest area, back area, neck, and hands are good placement options for such maleficent tattoo designs.

Some designs just turn out to be unreal. With its yellow flowers and green leaves, this tattoo illustrates the contrasting sides of Maleficent’s image as a villain. It reveals a hidden, vulnerable side of the character. If you want a full-arm Disney-themed tattoo sleeve, this design would be a cool addition. The use of colour and dark shading gives the design an extraordinary dimension and enhances the beauty of this ink villain’s tattoo. This is best suited for arms and legs.

There is more than meets the eye to this Disney character, Maleficent. It conveys that good can most possibly be hidden behind a silhouette of evil. You can take inspiration from some of these maleficent tattoos artwork, you like –