10 Best LGBT Tattoo Ideas That Will Blow Your Mind! 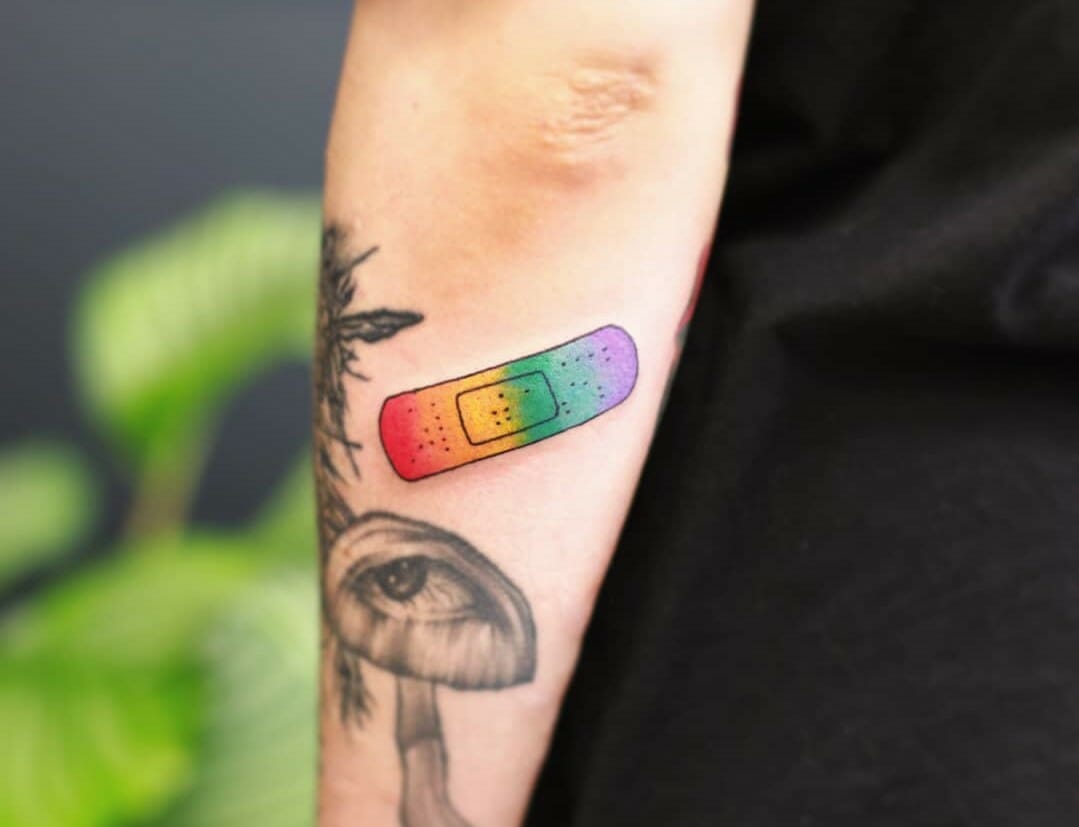 An LGBT tattoo is not a mere body art. It’s a symbol that reminds us that love is all that matters. Here’s a list of the greatest LGBT tattoo ideas of all time.

The LGBT community has many symbols that represent this community as a whole.

Even though society has taken great steps forward, the LGBTQA+ community is still looked down upon in some communities. Pride tattoos show that you’ve grown out of being afraid, and feel free to flaunt your true colours.

LGBT tattoos are evolving to provide a way for the LGBT community to bond together through a wide range of colours, logos, and symbols. These tattoos allow individuals to express their pride in their sexual and romantic orientation and demonstrate support for other members of the community. The most popular symbols include the rainbow flag, the unicorn, gradient line, the lambda, dots, the infinity sign, the labrys (double-headed axe), equal sign, freedom rings, double moon, bi-angles, and others. The wide variety of LGBT tattoos has a common root in the persecution of LGBT people throughout history, most notably the Holocaust – and the prime symbol related to this event is the pink triangle which was used during WWII to mark off homosexual men in Nazi concentration camps. Active members of the LGBT community and its allies get LGBT tattoos to either express their sexual or romantic orientation or their solidarity and support for the community as a whole. Either way, these tattoos showcase the pride the wearers have in their identities and the other members who have undergone struggles or are still facing struggles in everyday life and are fighting back bravely.

When you’ve been afraid of freely expressing your inclinations for so long, and you finally make a decision to let it out, but with style – an LGBT tattoo is the perfect coming-out present for yourself. The rainbow gradient line tattoo demonstrates the entire spectrum of gender and sexuality. You can choose to keep it small, but if this is your coming-out message to everyone, then a long gradient line will make you heard. It’s a statement tattoo and needs nothing extra. The rainbow colours say it all.

This tattoo would also be an apt choice for those who are still discovering their orientation or are still out on the quest of finding themselves, but at least they know they sure do belong to the LGBTQA+ community. The rainbow is the umbrella symbol one can fall back on when one cannot figure out their exact orientation.

This rainbow sheep tattoo signifies that the wearer isn’t standing alone; rather, they are standing out from the rest of the herd. They are indeed different because they have got more colours and a lot more love to give, more positive energy to radiate.

Oftentimes, people turn the negative comments and tags given to them into something positive. Since the LGBTQA+ community is sometimes treated as an alien race because some rigid people are just not ready to accept that there can be a range of sexual and romantic inclinations and one does not have to fall under a particular gender, this queer alien is an innovative LGBT tattoo idea. It’s wearing a rainbow-coloured hoodie, and the tagline says “DROPPED AT BIRTH/ FROM SPACE TO EARTH”. Channel all the condemnation and hateful comments you have received as a queer person into this funky queer alien tattoo.

Now embrace your identity with some ornamentation. Rainbow ear tattoos are pretty famous among LGBT tattoos. It’s very minimalistic, subtle, and speaks volumes. They sit on the skin like tiny ear-hoops and give your ear a cool and funky look. Since ear tattoos can be complemented with ear studs, you can also choose specific LGBT symbols that will contrast or match your ear studs instead of some random design. Also, those who are not that into earrings or ear studs but still want to adorn their ears should definitely get these tiny rainbow hoops tattoo. It spares you of the additional effort of wearing an earring and keeping your ear bedecked all the time.

‘Be Gay Do Crime’ Frog Tattoo

Queerphobic people have shunned gay people for long as history has proved time and again. Yet again, this negative notion has been turned into a tattoo that preaches the language of love with a strong declaration. It’s time that every religion of the world rose up in solidarity and preached equality.

This LGBT tattoo uplifts one’s spirit and teaches one to embrace oneself without fearing judgments from others. The angry countenance of the frog in this tattoo adds to its cuteness.

We all want to hold hands with our loved ones while taking a walk in the park, commuting in the metro, or while crossing the road. But a lesbian or a gay couple or any queer couple for that matter – get uneasy while expressing their love amidst the crowd. They also have this constant fear that people would stare at them, would criticize them, judge them, and what’s worse, people might physically harm them. But you cannot spend your life being scared when all you did was love someone, which is not a heinous crime.

With this fineline lesbian tattoo, walk fearlessly with your partner, holding their hand, wrap your arm around them and maybe even surprise them with a loving embrace. This lesbian LGBT tattoo demonstrates how it feels like when you link your finger with your partner.

The six coloured dots design is quite famous among other LGBT tattoos. The colours have their own meaning. The red, orange, yellow, green, blue, and violet respectively symbolise life, healing, light, nature, serenity, and spirit. These dots make up a vital sign a member of the LGBT community carries with them.

There are other variations of the rainbow colours tattoo as well, such as the rainbow dewdrops, rainbow lines, rainbow armband, etc. One can even get the six stripes ring tattoo on the ring finger to celebrate their engagement or marriage to their loved ones.

Although LGBT flags tattoos are quite a common design among LGBT tattoos, they certainly haven’t lost their significance. Your rainbow Pride flag tattoo will always remind you that you are taking a stand for yourself, your queer friends, and the entire LGBTQA+ community. Flaunt your identity in pride with this LGBT Pride flag tattoo.

Many choose to get inked with their personalized version of the Pride flag tattoo. You can choose to make a little distinction by somehow demonstrating the categories or may customize your tattoo with some LGBT symbols or signs.

The lines from the song ‘History Hates Lovers’ by Oublaire have put it rightly. You have read all the Disney fairytales, but you can relate to none because none of those tales has preached queer love. They’re only about a prince and a princess falling in love and living happily ever after; none about two princesses or two princes falling in love and living their happy endings. But you have the opportunity to create your fairytale and write your happy ending, with or without Disney being an inspiration for it. Reclaim your queer fairytale with this LGBT tattoo featuring a rainbow behind the almost colourless Disney castle. The Disney castle has been tattooed with a pale sketchy colour on purpose to make the rainbow behind reflect vibrantly against the skin.

Love surpasses the boundaries of gender, sex, religion, caste, creed, and everything else. You don’t fall in love based on certain criteria. You just fall. The ‘Love is Love’ tagline has been an important emblem for the LGBTQA+ community. Fight for your love with this ‘Love is Love’ phrase tattoo. Give it a delicate touch with a simple italics font and a leafy wreath to retain its warmth and positive spirit. The fineline technique has made the tattoo pop out beautifully against the skin. Although it’s tattooed with black ink here, you can also personalize your tattoo by adding coloured ink according to your sexual and romantic orientation.

There are tons of other cool tattoo ideas related to the LGBT community. Some of these are: