101 Best Unicorn Tattoo Ideas You Have To See To Believe! 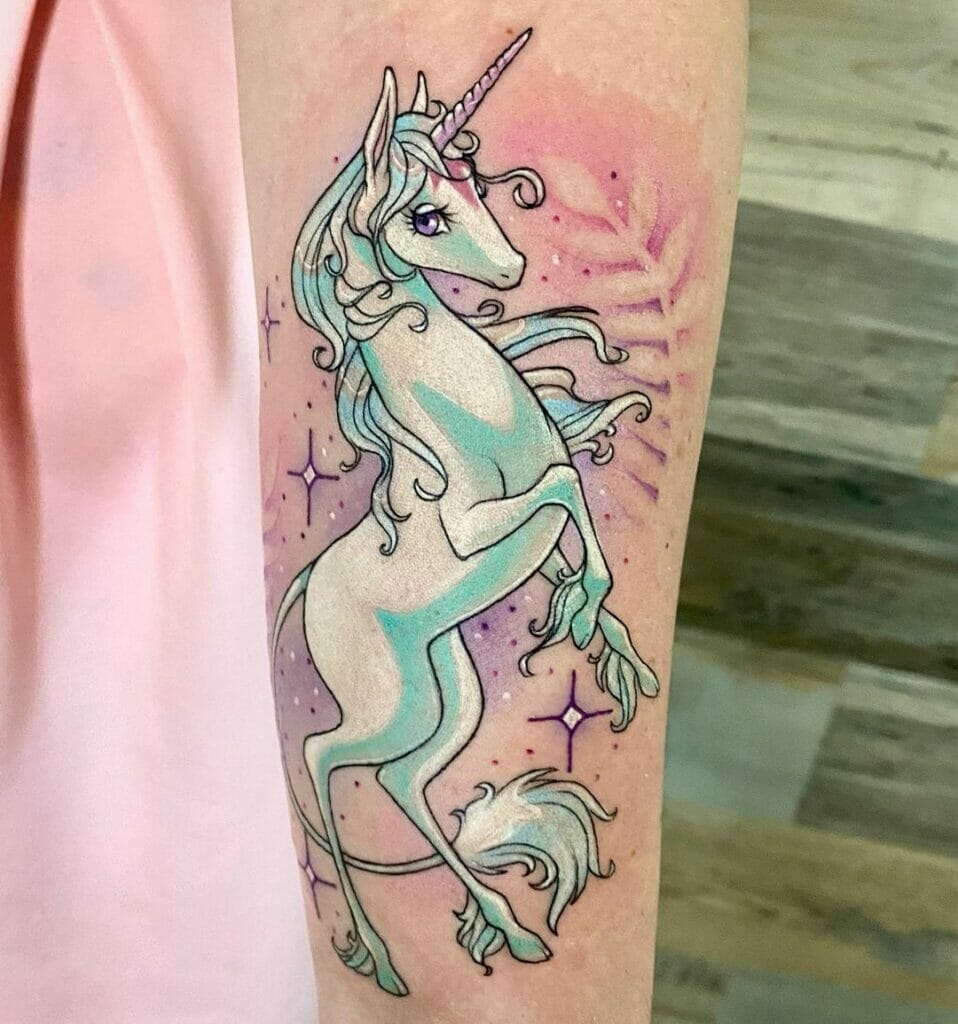 Have your pick of these stunning unicorn tattoos handpicked just for you to liven up your humdrum days with magic and more! With a lovely mane and a beautiful horn coming out of its head, this mythical creature has been the subject of many tattoo artists’ ink across the world.

As we grow old and get caught up in the web of meeting deadlines and paying bills, our relationship with all things magical and mysterious becomes estranged. We no longer believe in tooth fairies and Santa Claus. The mundane details and the inevitable catastrophes of personal life wear out the possibility of ever achieving a break from this banal existence.

But the human need to believe in things that cannot be explained with logic and numbers never really dies altogether. The whiff of petrichor, the spectacle of a shooting star, or a polaroid snapshot of an exquisite sunset can still make our hearts skip a beat no matter how old we are. After all, ours is a passionate race; made of poems, prayers, and stardust! Thus, to root for a Unicorn or a Pegasus in a world run by steel and coal is to reach out for the magic lost in the mundane.

Since ancient times unicorns have been associated with the concepts of purity, healing, femininity, and innocence. The strong undercurrent of mysticism and spiritual energy combined with the celestial beauty and majestic disposition of these mythical creatures have rendered them an other-worldly charm. We are never too old for unicorn tattoo designs because they represent the human faith in the divine and the fantastic which is an inescapable default of the very human condition. The list we have curated for you here presents ten eye-catching unicorn tattoo designs that will add a dash of colour and a dollop of enchantment to your existence.

This one is for those who are forever young at heart. This design of a cute little pony with big puppy eyes is sure to melt your heart quicker than butter melts on a steaming pancake.

The tattoo artist has done a tremendous job with the colour scheme. The incorporation of the pastels with a black outline creates an overall essence of overwhelming cuteness. In addition, the reindeer horns and the posture of the baby unicorn endear it all the more. You can get it inked on any part of your body and the size can be experimented with based on your preference. The fine balance between the pink and blue colours renders this tattoo a unique quality that upholds its charm without rendering the details reductive.

This one is a gorgeous design that lives up to the majestic disposition of unicorns. The sheer magnificence of the artwork takes the thematic conceptualization of unicorns as symbols of vigour to an epiphanic dimension. The fine line detail renders the entire piece a charismatic air which leads this tattoo design to become one of the most popular posts of its kind.

Keeping in mind the mythological significance of these other-worldly creatures, the body art infuses surreal artistic techniques with solid black outlines to turn the whole piece into a life-like representation of a unicorn in motion. The point of drawing it in this particular posture is to draw the attention of the casual observer to the masculine undercurrent complementing an essentially feminine design.

This design interweaves the ethereal beauty of unicorns with the timeless charm of Japanese art effects into a hauntingly lyrical template of cool pastel shades.

The serene effect is achieved by means of combining a pink shade that resembles cherry blossom and a celestial purple in definite proportions to get the perfect feminine touch which transforms the whole piece into a soothing and balmy artwork. The overflowing mane of the unicorn coiled at the base interspersed with strewn flowers exudes a kind of energy that is balanced and restrained while being simultaneously graceful. The fluttering butterfly poised about the unicorn’s head deserves brownie points.

You can get this tattoo inked on any part of your body but we recommend enough exposure to allow for maximum colour pay-off.

The horn of the unicorn in this particular tattoo is the ultimate focus of the entire design. Such a tattoo not only adds dimension to your quotidian sense of style but also complements it.

Unicorns are most notable for their horns. The long, straight, spiralling horns of a unicorn are believed to be the source of its power and strength. In many cultures across the world like Greek, Chinese and Persian unicorns are considered the emblems of purity. Unicorns are also creatures who, it is believed, can transcend the barriers between this world and the next. This has probably led popular culture to associate unicorns with death and after-life. In this tattoo, the horn serves as a metaphorical bridge between parallel worlds through which our consciousness seamlessly navigates, in spite of us.

This tattoo is a riot of fluorescence and fuchsia. The charm of the design lies in its staggering vivaciousness. The art features an effeminate unicorn with rippling muscles ensconced in a template of stars and vignettes. The bold design leaves little scope for experimentation, but the use of colours and white outline shaded with pale blue can be changed depending on individual preferences. Because of this special technique of combining bold colours with specifying vignettes, the whole thing transmutes at once from some random tattoo design to a unique piece of art.

We suggest the forearm or back as perfect spots to get this inked on since the play of light and shade will add dimension to the design thereby allowing the design to shine exuberantly.

A riot of pop colours thrown together in a slapdash manner makes this tattoo design flashy and alluring.

The fun part is that it uses a pale pink blush effect for the horse’s mouth and ears which in juxtaposition to the jazzy rainbow colours used for the rest of the tattoo create an interesting visual effect that borders along the line between the psychedelic and the surreal.

An embezzling tattoo design that sort of deconstructs the ‘less is more’ aesthetic culture and how! The larger-than-life unicorn artwork coupled with vivacious watercolour shades pulls off an overall effect that is at once sensational and overwhelming.

If you are in the mood for something bold, fun, and downright vibrant, then this unicorn tattoo is for you. Besides the size of the tattoo which kind of takes up the entire arm length, what is striking about it is how the watercolour effect is allowed to ooze out through a fine filigree of line work which is perfect to the last detail.

Since unicorns are considered transcendental creatures which can cross the barrier between this world and the next, therefore, this unicorn tattoo upholds through its artwork an interstitial space where life and death seep into each other creating a state of being which is neither alive nor dead. In other words, what we popularly refer to as the zombie state.

Of all zombie unicorn tattoos what stands out most about this particular one is how it plays with the blood-tear dichotomy. The artistry lies in the fact that it transmutes the sensation of fear into melancholy in a single stroke!

This is a black and white classic tattoo design that represents a full-size realistic adult unicorn painted in a grand posture.

The sheer statuesque of the unicorn portrait exudes power, royalty, and a sense of authority. Get this done on your back and you can replace the shade effect with a vignette effect which will add dimension to the design. The subtle shading along the belly and the back of the horse must be carefully done so as not to render the fragility of the entire artwork reductive.

This is an out-of-the-box design that combines stylistic features inspired by prehistoric cave paintings with bold inky effects that produce retro vibes.

The red hair symbolizes searing rage and dynamic power. To sport this tattoo on your arm or neck is to indulge the indomitable and untamed nature of the human spirit which outshines darkness in any form of manifestations. The posture of the unicorn’s silhouette and the flying red mane can be also interpreted as a symbol for virility.

Unicorns are widely known for being elusive- creatures that are very difficult to pin down or catch sight of. But just as we choose to fall in love in a world otherwise determined by war and hatred, we can take this leap of faith to believe in these magical creatures. So probably, sporting a unicorn tattoo will revive the lost connection between humans and magic thereby shaping a future for us where logic and faith co-exists. Across the universe, the celestial beauty of these mythical creatures continues to enthral and enchant the young and old alike. A unicorn tattoo represents force, innocence, masculinity, femininity, liberty, and panacea. Maybe this is the reason why unicorn tattoos manage to captivate people from different age groups. As the saying goes, we are never too old for fairytales and what is life anyway without some pixie dust sprinkled over it?

Unicorn tattoos inspire within us the drive to carry on with life in spite of multiple hurdles and obstacles. They are a manifestation of the unconquerable human spirit and are quintessential paradigms of strength, willpower, innocence, and clarity of mind. Apart from the designs included here, you can also check out some more unicorn themed tattoos such as-