10 Best Leshen Tattoo Ideas You Have To See To Believe! 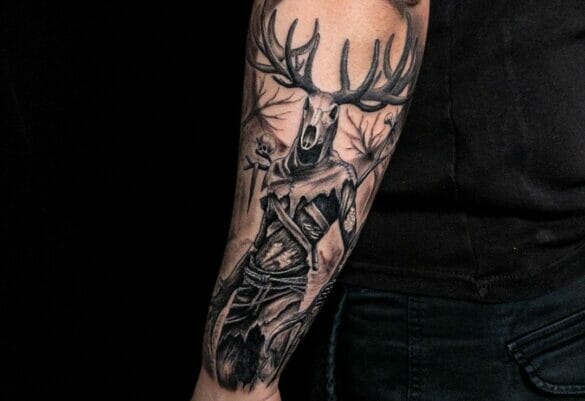 If you know the game series, watch out for ‘leshy’, also called leshen or spriggan, a wood demon that is characterized as “living only to slaughter.”

They don’t leave much for carrion eaters when they murder something or someone. If humans or things came upon a leshy in the woods, it was most likely because he had become disoriented that causes them to miss their turn.

According to legend, he had to turn all of his clothes inside-out to retrace his steps. Leshy is defined as a forest-dwelling, iron-resistant monster with a high level of intelligence.

For unclear reasons, many villagers believe he is a woodland spirit who guards the forest. It is a frightening beast that pursues forest creatures and lone nomads in existence. It has the ability to change shape. From the dark fantasy escapades and dense lore in the original novels to the combat and amazing and sick computer game, to the grim and delightful Netflix series and videos, there is so much to adore about The Witcher plotline and the witcher game. This is a program that has had a great impact on people’s lives, with such strong elements as tolerance even when confronted with human nature’s imperfections and deciding your own destiny. Many of the creatures in The Witcher sequence are inspired by folklore and mythology. The legendary Leshen creature is no exception.

You’ll agree that this leshen art tattoo services are totally cool and sick. The artist captures the witcher game in this amazing tattoo. The three birds continue circling around the leshen to complete and improve the entire look of the tattoo. The huge claws of the leshen gonna give it that extra gory look. Even though the tattoo is black and white, the shading and the wood background make the tattoo look very spooky and surreal. The tattoo here has been made on the arm, but this tattoo would also work brilliantly on the calf.

This leshen tattoo delivers the monster draped in a cloth, covering only the upper half of the creature. It also shows what looks like two human skulls hanging from the side of the monster. The eyes of the leshen have a lightning bolt coming out of it as well as from the eyes of the skulls that the monster has with him. The horns in the leshen tattoo art are covered with spider webs and the creepy claw that ends the tattoo that’s gonna give it a final touch of fear and gore. You can work with professional tattoo services to recreate this leshen monster.

This is a rather peculiar and unique version of the witcher game and witcher series and the way the artist delivers in this tattoo service. The tattoo does not portray the gory and scary version of the monster that we have all come to fear as viewers of the Witcher series. The artist has tried to capture a more human version of the leshen in this tattoo by giving it a human face along with the horns that it has. The trees at the end show the forest where it dwells.

Another part of this tattoo’s features is the relationship to Cernunnos. The creatures that encircle the character on the Gundestrup Cauldron are mirrored in the design. The artist here applies the principle of not showing humans.

This period’s Celtic art has numerous characteristics to its geometry and shape, but things you will notice quietly is its concentration on showing triskeles in indirect terms. In this tattoo, the leshen is shown on the shoulder on all four legs and not on two the way it usually is.

This tattoo depicts the Cernunnos’ Wolves. The starting of this artwork, the straight Celtic ring pattern on the top of the arm, was a tattoo that was pre-made before the rest of the tattoo was created. Cerninnos’ picture has appeared in many parts of the ancient Celtic realm and is strongly associated with beasts and hunters. The wolf medallion and faces on the chest, back, and wrist represent the triskelion and the strength of the trio.

This tattoo shows a very simple idea of the leshen monster, unlike the actual witcher game. It is this idea that makes it even more scary and fearful. The horns on the skull are huge and there is a red piece of material in its hand. It appears to be sitting on the floor with its legs crossed as if to lure you in and then pounce on you. The tattoo is made on the forearm just above the wrist. You can always get a smaller sized tattoo if you do not want it be noticeable at all times.

This arm tattoo shows the leshen in its full glory. The black ink is used to shade the scary monster to perfection. You can also see birds circling around the monster in the sky. The tattoo may look scary to some but for the game fans, it is the best representation of their beloved game and its characters.

If you are looking for a captivating lessen tattoo that can also give you the creeps, this is the design for you! The human skull attached to its back and the bone that can be seen hanging on its side are drawn amazingly by the artist. The horns are especially huge and cover a large part of the forearm. The placement of this tattoo is amazing and it clearly mirrors your love for the character.

This haunting witcher leshen design is a piece of art! The artist has used shades of black and grey to shade the leshen monster to perfection. It looks like the witcher 3 leshen tattoo. The monster looks absolutely like in the series and the witcher game. And you would agree that the whole look of the tattoo is completed by the wolf medallion at the end of the tattoo. The tattoo is made on the forearm with the wolf medallion being drawn at the end and just above the wrist. The skulls, horns, and the forest that is drawn in the background bring the whole artwork to life.

Here is the witcher leshen tattoo that steps away from its usual black and white, gory monster-look for a more colorful look. The deep red color used for the leshen’s wrapping cloth and its horns look amazing without neglecting the fact that the leshen is a monster. The legs and feet of the monster are colored with a green and yellow tinge that give it an added creepy look not to mention the boils it has all over its legs that fill one with disgust and terror. The hands of the leshen are colored orange and the ends of the claws or the nail are given a dark pink color.

A leshen tattoo is the epitome of fear, strength, and grim nature. You can play around and improvise on your leshen tattoo ideas if you plan on getting a few new ones. You can get an idea and expand on that after you understand what looks good on your body and the meaning you wanna depict through the tattoo. Here are a few simple ideas that you may love.