10 Best Gorillaz Tattoo Ideas You Have To See To Believe! 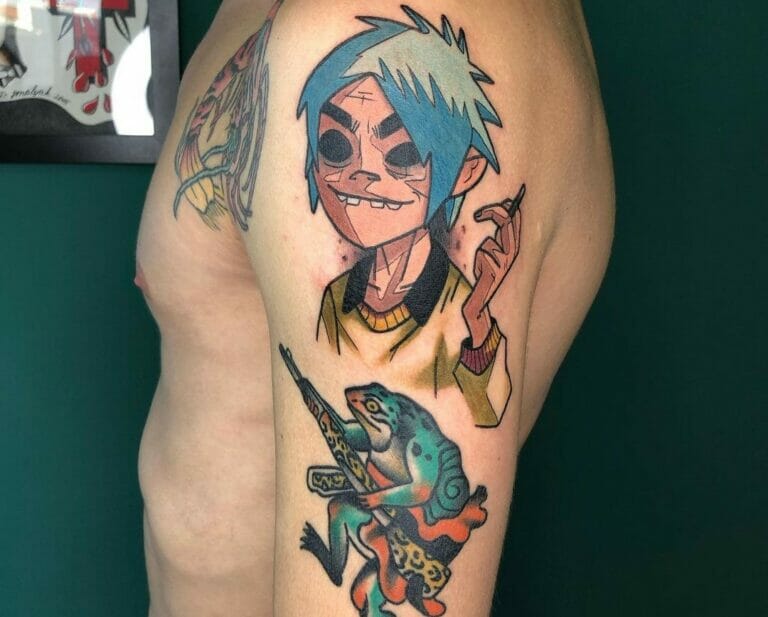 Are you a big fan of the English band ‘Gorillaz’? Then here are some amazing Gorillaz tattoo ideas that every fan should check out!

The band’s musical genres include a variety of pop ranging from Brit pop, alternative pop, rock, art pop, hip hop, indie rock, new wave or even experimental rock. The band first achieved fame with their debut album ‘Gorillaz’ with the hit lead single called ‘Clint Eastwood’. Since then, the band has released seven albums that have been critically acclaimed throughout the world. The Gorillaz have also won one Grammy award and two MTV Video Music Awards among many other awards.

Quirky Gorillaz Tattoo Designs For Fans Of The Band

If you are a big fan of the band Gorillaz and really like their music, you can definitely get a tattoo based on the imagery of the band. As seen in the picture, the wearer has gotten a simple outline of one of the members of the band on her arm. If you are getting a tattoo for the first time, you may want to choose a minimal design like this. Choosing a tattoo like this will also help you identify other Gorillaz fans when you go out!

If you are searching for more inspiration for amazing tattoos related to music, here are some beautiful musical tattoo designs for you to see.

Awesome Gorillaz Tattoo Ideas With All The Members Of The Band

When the Gorillaz first released their album and the accompanying music videos, everybody was quite confused about the animated members and the imagery used. All their fans wondered who was the real face behind the band and what was the meaning of creating a project like this. The story behind the creation of the band is also quite unique. Albarn and Hewlett lived together in London and were watching the music channel MTV one day. While watching the channel, they realised how vapid and monotonous the content on the channel really was with every song being like the other. In order to give a social commentary on the contemporary music scene, they came up with the idea of the animated band together with Albarn creating the music with help from other producers.

The best way to pay a tribute to the band would be to get a tattoo like in the picture above, with all the Gorillaz characters.

‘Feel Good Inc.’ is a song by the English band Gorillaz along with the American hip-hop group named De La Soul. This was a song from their second album ‘Demon Days’ and topped various Billboard charts across the world. It was also nominated for three Grammy awards and won the award for Best Pop Collaboration. The music video for the song heavily featured windmills which were inspired by Hayao Miyazaki from Ghibli Studios. The song was a commentary on intellectual freedom and mass media.

If you like the song a lot, you can also get a Gorillaz Windmill tattoo. Not many fans of the band can find great Gorillaz Windmills tattoos or make one, However, this will be the perfect tattoo to make a statement.

Great Tattoo Ideas With 2-D From The Gorillaz

The most well-known face among all the Gorillaz members has to be Stuart Harold Pot or “2-D” who is the lead vocalist for the band. 2-D is also the protagonist of most of the music videos by the band. This character was made as a satirical attempt by Albarn and Hewlett to make fun of all the lead singers of bands at that point of time where they were handsome to look at but did not write their own songs. They were also considered to be vapid or dumb and had very little idea about real-life issues.

However, if you like this character and what the fictional universe has done with him the most, you can also get a 2D Gorillaz tattoo.

A Gorillaz 2D tattoo may be quite dark and give off an edgy vibe if that is what you want and like. You can also include the classic cigarette in the 2-D tattoo as seen in the picture above.

Fun Gorillaz Tattoos Based On The Member Noodle

Noodle is a fictional Japanese musician who is a part of the band. She is the lead guitarist of the band and provides occasional vocals too. According to illustrator Hewlett, Noodle is the one member who he likes the most. You can definitely take some inspiration from the tattoo above on how to make a cool Noodle tattoo. The colourful shades also add an extra edgy and awesome effect to the character.

The music videos of the songs by the Gorillaz are none for their abstract, colourful and animated imagery. Each of the members go through different adventures as they make deep, meaningful statements on our lives.

Therefore, if you like the Gorillaz and want a tattoo based on their songs, you should ask your tattoo artist to create the perfect colourful tattoo designs for you. The colour should not be too bright but reflect the muted, darkened tones of the band itself.

Tattoo Sleeve Designs For Fans Of The Gorillaz

As seen in the picture, the lower half of your arm below the elbow will also be a great place to get your Gorillaz tattoos. You can also ask your tattoo artist to make it colourful so that it stands out easily. Consequently, if you like the Gorillaz, you can choose an amazing design based on the band with the help of your tattoo artist.

Wonderful Tattoo Ideas With The Member Murdoc Niccals From Gorillaz

Murdoc Niccals is definitely one of the most interesting characters among all the members of Gorillaz. He is the bassist for the band and is a Satanist. Therefore, he was born on 6/6/66 and even made a deal with the Devil in order to become a famous musician. He was also inspired by Keith Richards, who was the guitarist of Rolling Stones. If you like Murdoc the most, you can definitely go ahead and get a tattoo based on him.

The bicep is a great and convenient area to get a large tattoo because it provides a large space to properly make the tattoo. Often, in smaller spaces, most of the nuances of the tattoo design are missed. It also becomes difficult for the tattoo artist to include as many details as they may want to. If you want a great Gorillaz tattoo, you can ask your tattoo artist to place it on your bicep for maximum visibility.

Whenever we think of music, the biggest pop music stars come to our mind. After all, they are the ones who gain the most popularity and fame due to their extravagant music videos and dance tracks. However, there is a niche of musical groups and bands who also create alternative pop. Songs that are just as catchy but are not strictly good enough to dance to. A lot of alternative music lovers find that the songs made by Gorillaz are similar to the alternative pop or rock genre.

Consequently, if you find that you like the band and its songs a lot, you can get a Gorillaz inspired tattoo which will reflect a lot about your music tastes.

It is very common for people to want tattoos based on their favourite musical bands or singers. They may also want to make a music tattoo that will include their favourite songs or lyrics by the band or the artist. After all, a musical group or artist only becomes a favourite once we personally connect or relate to the kind of music they release.