10 Best Jormungandr Tattoo Ideas You Have To See To Believe! 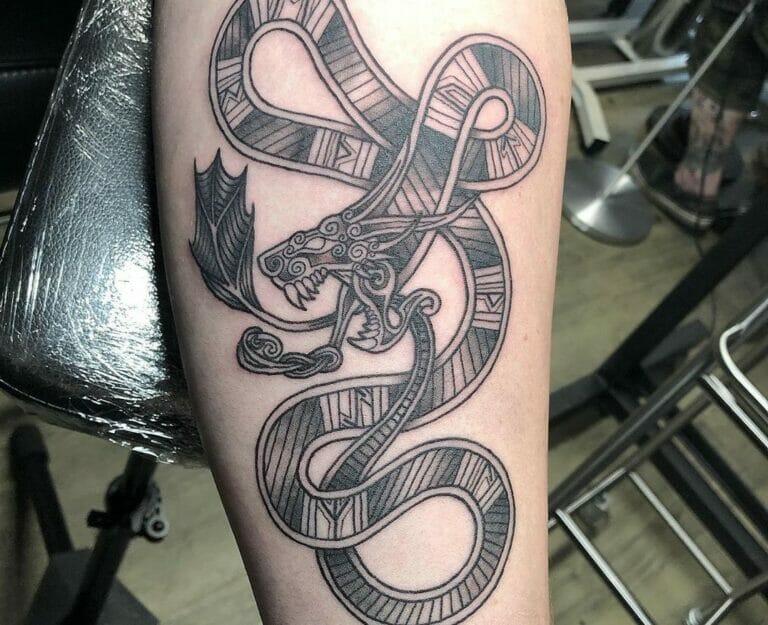 Are you looking for a Norse tattoo that represents hope and life after death? Then here are some amazing Jormungandr tattoo designs that you should check out!

Jormungandr is a serpent in Norse mythology who used to guard Midgard or Earth.

The name Jormungandr means ‘Great Beast’. This huge, fierce serpent was supposed to kill the God of thunder Thor during the mighty battle of Ragnarok.

Loki, the God of Mischief, was the father of Jormungandr. According to Norse mythology, Ragnarok is the battle that ultimately causes the end of the world. During this battle, Jormungandr was fated to kill Thor, the powerful God of Thunger, wreaking havoc and destruction upon the world.

The symbol of Jorumungandr is represented by a serpent that is twisted into a circle. According to some myths, this symbol is also known as the Ouroboros symbol where the snake eats its own tail as ‘oura’ refers to tail and ‘robos’ refers to eating.

To some Nordic knowledge enthusiasts, the serpent beast also reflects the circle of life where there is no beginning or an end but simply a transformation in each stage.

As seen in the picture, the wearer has cleverly put the ouroboros symbol around their arm above their elbow. This is a unique and unconventional Jormungandr tattoo idea that you can definitely choose for yourself if you do not like large, flashy tattoos that take a lot of time to complete.

Most of the Viking tattoo pictures you will see on the internet or in the tattoo parlour will be monochromatic, done completely in black ink with shaded effects. However, if you are a tattoo lover who loves to get colourful tattoos, you can also add coloured ink to your Jormungandr tattoo as well.

As seen in the image, the wearer has unleashed their inner creativity and coloured the serpent beast a fiery red while the surrounding sea waves are all blue in colour creating a wonderful contrast on the skin. Such a tattoo will take a lot of time to complete and will be quite expensive too. However, the ultimate result will be absolutely gorgeous.

In the picture above, you will see that the wearer has combined the Norse symbols in the Yggdrasil and Jormungandr tattoo together. The Yggdrasil is an ancient and sacred tree which stands at the centre of the nine universes according to Norse mythology. It is said that Odin hanged himself from this Tree of Life for nine continuous days in order to gain knowledge about the worlds other than his own. Due to his actions, he saw numerous significant visions and became an infinitely wise person.

Jormungandr Tattoo Ideas For The Side Of Your Head

If you are ready to experiment with your Jormungandr tattoo and want to try something new and funky rather than the traditional tattoos, you can place the Jormungandr tattoo on the side of our head. As seen in the picture, many people shave a patch of hair on the side of their head and place the tattoo of the Jormungandr there. The arch, bent shape behind the ear will also be the perfect place to set the tattoos. However, such a tattoo may be a little difficult to maintain and take care of as you have to keep that area shaved at all times to show the tattoo.

If you are in search for some more inspiration regarding a Norse tattoo, here are some amazing Ouroboros tattoo designs you should check out!

Ideas For Jormungandr Tattoo Along With Vegvisir Symbol

Another popular Norse symbol with deep symbolism behind it is the Vegvisir. The vegvisir was a magical plank that used to guide explorers through rough weather. The symbols etched on a wooden plank were infused with magic and were thought to help the explorers who set out on a difficult journey. Consequently, you can also add to your Jormungandr tattoo with a Vegvisir symbol to make it more eye-catching. You can be assured that people will definitely come to you and ask about their meaning.

In case you like the Vegvisir symbol more the other Viking or Norse tattoos, here are some great Vegvisir tattoo ideas for you to see.

Chest tattoos are also quite popular among tattoo lovers who like to cover up every part of their body with ink. If you have decided to get a big, complex and elaborate chest tattoo with some Viking or Norse symbol, then you can definitely look at Jormungandr tattoo images on the internet.

As seen in the picture above, the wearer has gotten an elaborate Jormungandr tattoo that extends beyond their chest and goes to their stomach as well. In addition to that, they have also added the Vegvisir symbol on both sides of their chest with the ancient runes. If you want more cool references to Norse legends, you can also draw Thor’s hammer Mjolnir on the chest tattoo. A Thor and Jormungandr tattoo would look amazing and eye-catching.

Ragnarok is one of the most definitive moments in Norse mythology. If you have seen the TV series ‘Ragnarok’ or watched the fun Marvel movie ‘Thor: Ragnarok’, you will know that it literally means the end of Asgard as well as the whole world. In the movie, Thor along with Loki protect the citizens of Asgard but cannot protect Asgard. However, in actual mythological stories, the monster named Jormungandr actually kills the God of Thunder named Thor.

Consequently, if you want a dark and gritty Norse tattoo, you can also ask your tattoo artist to make a Norse Jormungandr tattoo on your body. As seen in the picture above, the tattoo Jormungandr looks extremely real due to the heavy shading by the artist with black ink.

If you are a big fan of the Thor movies created by Marvel, then you must be interested in Nordic mythology and the other gods apart from Thor. Odin, Thor, Loki and their other family members including Frigga all have wonderful stories as they get embark on godly adventures.

If you are looking for more ideas, you can also ask your artist to draw up a Jormungandr Mjolnir tattoo where you combine this beastly dragon with Thor’s fearsome hammer. In addition to that, you can also get a Fenrir and Jormungandr tattoo. Since Fenrir is a monstrous wolf in Nordic mythology, these wolves would be an appropriate addition alongside the Jormungandr.

If you want a unique tattoo from Nordic mythology, you can also combine two or more symbols in your Viking tattoo. As seen in the picture, the wearer has added a Viking axe called the Skeggox or the bearded axe along with the Jormungandr. These axes were used as tools and weapons in various Scandinavian Nordic countries where the Vikings lived. Slain warriors from the enemy side were often killed with the help of the Skeggox. Consequently, if you need some inspiration about how to make your Norse tattoo cooler, you just need to open up your mythology and history books for more details!

A lot of people are interested in exploring their Nordic roots nowadays. Some others may simply find Viking history quite interesting as it was an important event in the history of the world. Consequently, if you feel you want to be reflect your roots or your love for the ancient Viking civilization and their culture and religious stories, you should definitely go ahead and get a Jormungandr tattoo that you like!