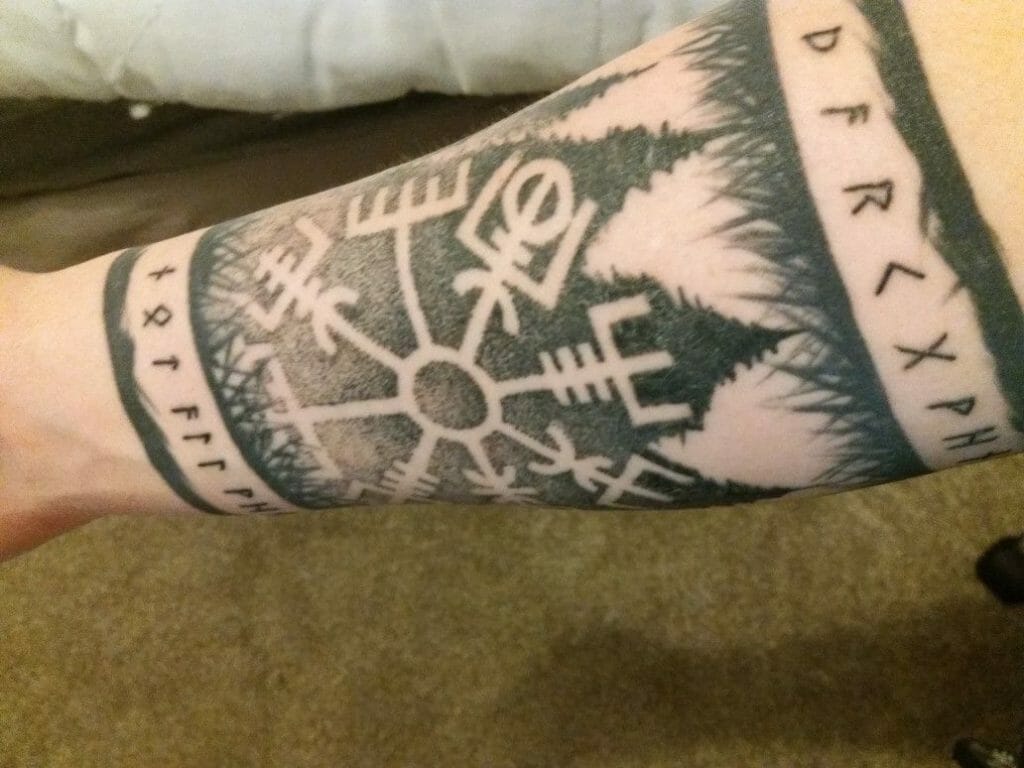 Vikings were fearless warriors of the north! Today, their ways and mythology is present everywhere in pop culture – from movies to video games! The rise in worldwide popularity of Norse inspired content was helped with the series Vikings and announcement of the upcoming Assassin’s Creed Valhalla game, among others. Now you must be in a frantic search for an epic viking tattoo. If so, you’ve come to the right place! Check out our list of 15 best Vegvisir tattoo ideas below!

What is a Vegvisir tattoo?

A Vegvisir is an Icelandic magical symbol, intended to bring good things to its bearer. The word Vegvisir is Nordic for way or path and pointer or be wise. Getting lost at sea with a vegvisir vikings compass tattoo would never happen!

What do the runes around Vegvisir mean?

While the Vikings themselves used a compass based on the sun to find their way, the Vegvisir is still considered a compass symbol. Runes hold deep and magical properties, according to the ancient Nordic people. The eight runes on a Vegvisir tattoo may represent the eight cardinal directions or alternatively the nine worlds of Norse mythology with the human Midgrad in the middle.

What is the meaning behind a compass tattoo?

Whether in a square or circular format, this Norse compass tattoo ensured one never got lost at high seas. It also disrupted bad weather while sailing, which is, you know, the most important thing when in open seas. Can you change your destiny with a Vegvisir sign tattoo?

What is the meaning behind a compass tattoo?

Compass tattoos, in general, represent you as an explorer. Be it of your inner self or the world, everyone has an explorer inside them! Those at sea often have a compass on their skin or ship itself, alongside the trusty anchor, as to not be lost in this unpredictable environment. If you think you need something like this to never get lost, we suggest keeping reading this article!

A Viking compass or Vegvisir probably wasn’t used by the original Vikings. However everyone needs a compass in their life! And nothing is stopping you to get one of those Vegvisir symbols today! The way the tattoo itself is your skin tone while contrasting the deep black ink for the background is so amazing! Always receive protection from your ancestors with this epic runic compass tattoo!

For ultimate protection at sea, have an Icelandic Vegvisir on your arm! Even stronger magic is achieved with runic symbols for your own name! Runes were used throughout ancient Europe just like latin symbols are today. Search the correct runes for the tattoo and see how your destiny changes!

Never lose your way in life with this Vegvisir tattoo! Bold ink lines on viking tattoos are traditional at this point. And what’s wrong with a classic black ink tattoo? The Vegvisir symbol tattoo works great for any placement. Do you believe these runes are magical?

A fan of studying magical properties of the ancients? Do we have a tattoo design with symbols for you! Combine moon phases with traditional viking compass tattoos and see for yourself what meaning does the new sign hold! Done in fine black lines, this Vegvisir tattoo looks spectral. Be protected from bad weather anywhere you go with a Viking compass tattoo!

Only worthy warriors dreamed of being escorted to Valhalla. This majestic hall was the goal for Vikings! If you think you’re a warrior worthy of meeting the gods yourself, get this Valhalla Vegvisir tattoo!  Bonus points for knowing what the ‘M’ in the middle stands for! Choose an old-looking font for Valhalla and you’re good to go. Appropriate for any gender, this Viking compass will guide your way in life!

Wolves in Norse mythology are regarded as bringers of chaos and destruction, you know, with Fenrir ending the entire world! But in this peaceful mountain scene, you can’t but not feel relaxed in his presence. If you feel like a lonely wolf from the image, it might mean you’re getting lost in life. If so, then this tattoo is perfect for you, as a Vegvisir tattoo will help you find the path!

The holy Yggdrasil tree from Norse mythology connects all other worlds. Maybe you want to be more in touch with your roots, or you just find this Viking tattoo awesome. Either way, you’ll love this Yggdrasil Vegvisir tattoo! Find your trail to any world you wish to visit and never get lost with a Viking compass tattoo! This tattoo is ideal for an upper arm or calf muscle placement!

A pair of ravens diligently bring news to the ruling Norse god – Odin. But what happens when you kill the messenger? Wanting to pair a seemingly hurt raven with a runic compass symbol might indicate you fear someone never coming back, as Odin did for his ravens. The Vegvisir tattoo with it’s magical runes will help the bearer find the right path, Icelandic people promise it. So get this stunningly elaborate tattoo design on your back to achieve just that!

Runes are mostly regarded as Viking symbols, even though other tribes used them. Embedded with mystical properties, they were able to grant the bearer something supernatural. You found your way to our list of 15 Vegvisir tattoos, but can’t pick a rune? Just get all of them like in this sketchy Vegvisir runes tattoo! Doesn’t this tattoo design remind you of a clock of some sorts?

How is your search for epic Viking compass tattoos going? Search no further than this mythical viking tattoo right here! As we keep emphasizing, the Vegvisir is a symbol to help you find a safe path at sea. Do you know who circles around our sphere of water? The sea serpent Jormungandr! As long as the beast holds its tail, you’re safe to bet this Vegvisir tattoo! Get it anywhere you want, but we think a head placement is so cool!

Tired of seeing your typical Vegvisir symbol as a tattoo? We give you this one inspired by traditional Vikings inked tattoos! If you can speak old Icelandic, good for you! We’re sure you can pick meaningful words and add them to this incredible Vegvisir tattoo design! This type of tattoo is perfect for chest or shoulder placement, but you’ll find your own way with that one!

Knowledgeable in Norse mythology? We say get an awesome tattoo reference like this one! The two ravens Huginn and Muninn are thoughts and memories of the 9 worlds. Odin’s companions see everything and hear everything! If you never want to lose your path in this world of information, get this sketchy black ink Vegvisir with ravens tattoo! This tattoo is ideal for a chest or back placement, but no pressure!

We explained previously the symbols wolves and ravens have in Norse mythology. If you’re still not hooked on a Vegvisir tattoo design, we say combine it with the two! What better way to honour your Icelandic roots than with a spectacular tattoo like this one! Most of our choices included only black ink, but we can’t say no to the stunning crimson red for the background! Carry this sign of protection everywhere you go with this epic Vegvisir tattoo!

An unconventional Vegvisir tattoo we found here! The Vikings or people of the north in general, regarded the Vegvisir symbol as a guide at sea, bringing good weather. They would engrave it on their ships, or even tattooed it themselves. A seahorse, however, is a symbol of patience and persistence at sea. So why not give the classic Vegvisir a new meaning with a pair of seahorse fish! This breathtaking detailed tattoo needs to find its way on your body!

We saved the most manly Viking Vegvisir tattoo for last! If none of our previous 14 choices convinced you to get Icelandic wayfinder tattoos, this one has to! This tattoo design seems to be a rock with the Vegvisir symbol bursting from your skin. Who could say no to such a tattoo? Ask to use white ink for fine details to make it more realistic!

We sincerely hope your search for a legendary Viking tattoo featuring a Vegvisir ends with our top 15 list! Norse mythology and culture are full of epic stories and symbols worthy of getting tattooed on your skin. Choose one of our featured Vegvisir tattoos for your next appointment at the best tattoo shop in town! Let us know if you found this list helpful down below!