10 Best Four Divergent Tattoo Ideas That Will Blow Your Mind! 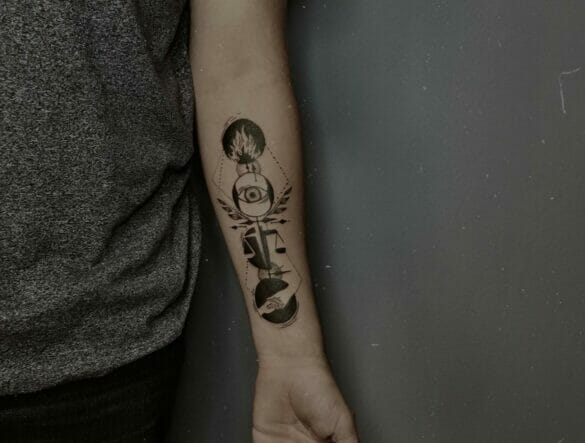 Have you always wanted to ink down your love towards Four as a tattoo? Then you must dive in as these amazing Four Divergent tattoo designs get unwrapped.

Divergent fans are everywhere across the globe.

There are numerous people who convey their love for the Divergent series and its characters through body art. Tattoos of these dystopian stories are the most popular among teens and young adults.

The faction tattoos of Four, aka Tobias Eaton and Tris, are especially the most demanded tattoos from the Divergent series. Even though the stories of Veronica Roth were quite famous among voracious readers, the emergence of the film series threw an upheaval among the fans. Since then, avid followers of actor Theo James are claimed to get Four’s temporary tattoos inked on their bodies. It is like they are celebrating the journey of Four with him.

This strong and efficient character was greatly played by Theo, and he was patient enough to get the complicated temporary tattoos and had to wait standing still for three hours every time. In the span of three hours, three makeup artists took their time turning the actor’s back into a painted canvas. It took a tiring forty-five minutes to remove the tattoos as well. The actor is appreciated for his effort and acting to make Tobias or Four come alive before the audience. Director Neil Burger made sure that this film can stick to the stories they are based on. So to pay tribute to this great character and to let you enlighten on the symbolism, here is a peek into the world of Four’s tattoos.

Classic Four Tattoo On Back

This tattoo on the back looks almost exactly like the film. It is a free-hand tattoo done with black ink. The five factions of Four’s tattoo are precisely drawn, tracing the spinal cord of the tattoo wearer. The tattoo looks futuristic and intriguing and will be great for the fans.

This tattoo has its origin in the stories of Veronica Roth. It bears a symbolic reference to the world of Divergent and also to Four’s personal qualities and growth. The image of fire represents the Dauntless faction, the hands the Abnegation, the scale represents the selfless, the eye indicates the intelligent, and lastly, the tree represents the peaceful. These symbols play a great role in the film.

This is one hell of a unique tattoo and looks fire on the thigh. It is drawn and shaded with black ink to form a pattern of a Metatron cube within which the five factions are skilfully placed. This tattoo is an inspiration for tattoo artists and lovers.

The Metatron Cube is a geometric pattern symbolizing a divine connection. The link between the Divergent factions and the cube is absurd yet strong. If you are a follower of sacred geometry and also Divergent, you must opt for this tattoo design next time you visit the tattoo parlor.

These colorful images of the factions on the back of the leg create an artistic tattoo. Tattoos of Four are rarely made to look different from the rest. Here the symbols have various meaningful colors representing them. And also, the order of the symbols is a little different here.

The Dauntless faction is colored orange, whereas the Candor is painted green. All these colors bear a strong link and significance to the factions themselves. If you want to try watercolor tattoos, go for this neat and fine tattoo design.

Ever seen a DNA-shaped Divergent tattoo? Well, here is one right in front of you. Each step of the DNA is interconnected with each faction of the Divergent universe. The tattoo is maintained throughout with fancy dotwork. The colors pop out against the background of dark shading.

The Dauntless, Abnegation, Candor, Erudite, and Amity are within the blood of these fictional characters. This tattoo indicates that reference. Even if Tobias was a born Abnegation, he fled to Dauntless. Nobody can ignore their blood, can they? If you wish to get this cool tattoo inked on ur body, you should hurry up.

Nobody can ignore a sleeve tattoo when it is showing adoration towards Tobias Eaton. This Four tattoo divergent on the arm has a kaleidoscopic effect all around the factions. It gives the tattoo an aesthetic presence.

This tattoo looks like a tribal tattoo at first. But the more you look, the more you discover the fire, the scale, the eye, the hands, and the tree. These popular symbols of life bemuse you. This design will look good on any body part.

This tattoo on the arm also has a tribal and absurd touch to it. The symbols of the Divergent social life are etched onto the skin carefully with their hidden messages inked down side by side. They are linked by lines that form the shapes of a pair of wings and a left hand, creating the shape of an angel. The whole tattoo is black, with no trace of color to be seen.

Although a touch of some vibrant colors would look nicer, this dark tattoo gives off a mythic and mysterious vibe. The messages behind each faction are clearly portrayed on the skin, paying honor to the fiction. This tattoo will be an inspiration to you if you decide to get it.

This is one of the generic and simple Four tattoos from the stories of Divergent books and film. This is a miniature of the actor Theo James’ tattoo and looks cute on the belly. If not for the makeup team of the film, this tattoo would not even have been born.

Divergent’s Four Tattoo drawing will look good both on men and women. This tattoo has its origin in the film. The actor Theo James tolerated three hours of waiting to get the tattoo done to bring the character to life. So getting this tattoo is a Divergent fan’s dream.

This tattoo on the leg is elaborative and colorful. The five factions of the Divergent tattoo are skillfully inked on the skin against the watercolor background. This makes the tattoo look more vibrant and attractive.

Watercolor tattoos are widely celebrated all over the world. With its growing demand, getting a Divergent stories tattoo similar to that of actor Theo will be a wise choice. The rainbow colors of this tattoo are a sign of liveliness and equity. If you are such a tattoo lover who adores various colors, this watercolor Divergent tattoo will be a thumbs up for you.

This Divergent tattoo is sprawled across the back of the arm. From top to bottom, the images of the Dauntless factions, Abnegation, Candor, Erudite, and Amity, are drawn very realistically. The three ravens of Tris are also inked alongside Four’s tattoo.

Realism, the art form of the eighteenth century, is used to etch this tattoo. The symbols of the factions look like photographs or paintings. The tattoos of Theo James and Shailene Woodley were temporary tattoos, but these tattoos look more real than permanent tattoos. The Three Ravens of Tris Divergent tattoo symbolizes the memory of her father, mother, and brother. The birds are like a reminder to her of her past life with her family. Shailene Woodley, aka Tris, wears the tattoo on her neck. The merging of two tattoos together affects getting a fabulous and brave tattoo.

Tattoos on the waist are in vogue among men and women of all ages. And when it is a popular tattoo like actor Theo James’ Divergent tattoo, chances are people would die to get it inked. This is a typical simple-looking but on a different body part. The tattoo style is quite usual and is inked in black color.

Waist tattoos are often thought to bring out the sensual side of a person. It has a sentimental value and a hint of secrecy attached to it. Not everyone sees your wait if you do not show it off. Having the five factions on the waist makes it a brave choice for women. If you want a Divergent tattoo on your thigh, this tattoo design will be a perfect choice for you.

These tattoos are indeed popular all around the globe. But these tattoos came into existence only because the makeup team of the Divergent film put so much effort into making the tattoos. From the faction tattoo of Theo and the tattoo of three birds for Shailene Woodley on her neck to the tattoo of the black and white hawk with red eyes for Maggie Q were all plans of the production designer Andy Nicholson.

Director Neil burger did an awesome job creating these characters from the books’ pages and letting them create their places in everyone’s hearts. Production Designer Andy Nicholson was the one who wished to make the tattoos of the characters look more futuristic. Indeed the tattoos turned out exceptionally cool and stylish. This is the perfect collection of the best of Four divergent tattoo ideas that will make you clear your confusion about which one to get.