10 Best Flag Arm Tattoo Ideas That Will Blow Your Mind! 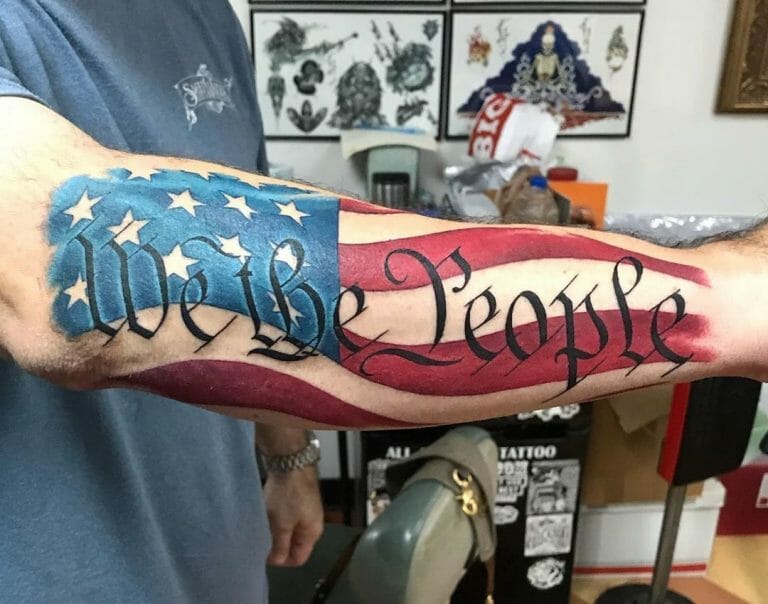 Looking for tattoos to pay tribute to your nation? Opt for a flag arm tattoo from our list that exhibits your patriotism on your sleeve!

American flag tattoos are widely popular among patriotic tattoos that have revolutionized the tattoo industry.

An amalgamation of the authentic red, white, and blue colours shows up in different styles every now and then, sometimes with stars or the bald eagle. Men and women have both chosen the American flag tattoo as a show of their patriotic feelings and it sure does look good on them both!

The best American flag tattoos have a variety of tropes. Some include a cross, some military men, dog tags, while others experiment with skin-ripped style, tribal designs, sleeve tattoos, and all the like. It is specifically suggested that one should agree with the sentiments associated with the American flag and hold up its integrity while experimenting with it in terms of body art. The US flag can also be seen as a symbol to accentuate your conceptions of freedom, individualism, and pride with style. Thus, posing as an arena full of opportunities, the American flag tattoos are an awesome fit for whoever wants to have a taste of the past glory and present pace of the USA. Keep reading to find the many ways you can ink these amazing American flag tattoo designs!

Classic American flag tattoos are made in the mould of flash designs that you may have noticed hanging down from the walls of a tattoo parlour. This tattoo flag tattoo features the fierce bald eagle with the American flag wrapped in its arms. A daunting symbol of the grandeur of the country, the eagle is the official emblem of America. Inspired by the tattoo designs of Sailor Jerry, this American flag tattoo is an apt exhibit of your patriotism. The interesting interplay of blue and red is further accentuated with the use of a bright yellow, making the eagle tattoo easily distinguishable, no matter the sites you choose.

For those who are looking for a small American flag tattoo on arm, this design will surely be an apt addition to your forearm. Crafted with monochromatic hues, the artist introduces the catch in characterisation. This patriotic tattoo is subtly enlivened with Charlie Brown and Snoopy, a tiny comic reference of the forever favourite of America. What makes this simple-looking American flag arm tattoo even richer in meaning is the amazing correlation between American heritage and culture and its patriotic sentiments.

A lot different from the other designs listed here, this discoloured American flag tattoo is a great fit for your forearm or even the upper back. The American flag is further portrayed with its many folds that perhaps suggest its wavering movement. These flag tattoos for men are especially perfect if one is searching for an unconventional yet beautiful tattoo design.

Pin-up girls might look obscure and overly sexualised in a tattoo, but these figures contain more patriotic connotations and meaning than what most people know of. These beautiful women were inked on the skin of military members and sailors who chose to go on leading a self-sacrificing life for the sake of the nation. These women would often be inked on sites like that of the chest, forearm, shin, as a sign of hope, beauty, and a call back home. The pin-up girl could also be a prime focus of your American flag arm sleeve tattoo or plain American flag tattoos for men looking for a historical entanglement to their tattoos.

This eagle American flag tattoo shapes up the entirety of your inside arm without itself having any definite peripheries. The face of the eagle is brilliantly drawn with sketchy strokes in black and the colours of the American flag splashed on it. This is surely one of the coolest American flag tattoo ideas that we have come across and would recommend to the guys looking for tattooing the rather hidden areas of their bodies.

American flag tattoos can also be efficiently made with a mix of patriotism and memorial for someone significant. Here, the tattoo design includes “dad,” clearly indicating the value of the family member alongside the country. This rose-shaped US flag on the forearm displays its vibrant colours with its stripes and stars. These American flag tattoo designs are great for guys who are looking for different designs to show a deep sense of respect for their country and their memory as well. This tattoo also shows how to implement name tattoo ideas in your flag tattoos without going over the top.

Another great way to revamp your American flag tattoos is to incorporate quintessential American tropes to express authenticity without saying much. This half sleeve American flag tattoo features the world-famous Statue of Liberty in its full stature. One of the key components of this flag tattoo arm is its subtle touch of colour and shading that makes the piece such an eye-catching design on the skin.

Guys, adding an eagle to your flags is one effortless way you can always choose to elevate the gravity of your American flag tattoos. An eagle against a background of black and grey could also be meaning to convey your serious temperament and at the same time exhibit respect for the country. You can either follow the course of this design or hike your American flag tattoo up and make it a full-fledged arm sleeve.

Who hasn’t heard of the American dream? But the artist here attempts to etch it against the skin. The overall black and grey design of the American flag aids in drawing attention towards the phrase that runs the country. But you can always input colours according to your taste and even add eagle wings for more tattoos for men.