10 best double-headed snake tattoo ideas that will blow your mind! 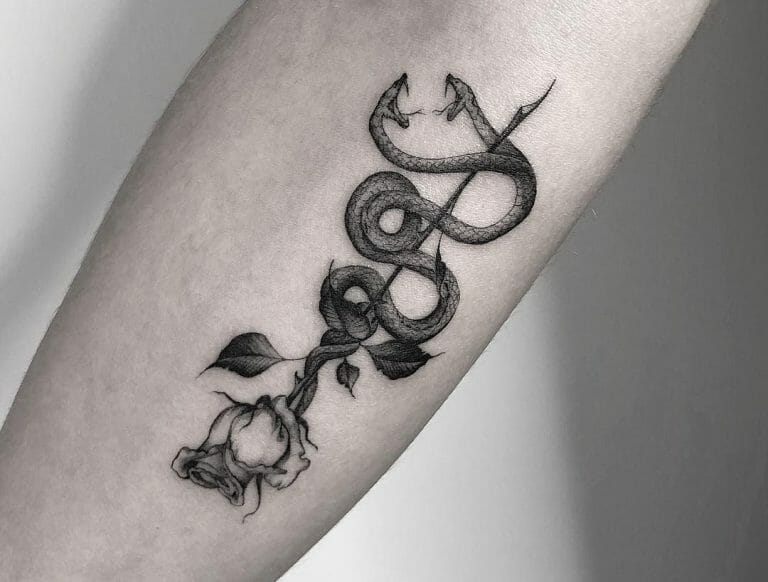 Are you looking forward to getting a double-headed snake tattoo? Here is a list of some awesome snake tattoo designs that you need to check out!

According to Aztec mythology, a double-headed serpent represents Earth and the Underworld. Aztecs are known to worship God Quetzalcoatl, a part of Aztec sculpture in the British Museum, also known as a precious snake. A Quetzalcoatl Tattoo is also known for being wise in life to have a good life. A feathered serpent is considered a supernatural deity, which is the human form of the God Quetzalcoatl.

You can express your snake tattoo idea art in a way that best suits your taste. Read to find out about some fascinating double-headed snake tattoos and what they mean!

This is a custom-made tattoo where the work is done in black and grey ink. A double-headed snake tattoo meaning has always been a symbol representing rebirth. This is because the snake sheds its skin to be reborn. It is also known to represent both the Earth as well as the Underworld. One snake is tattooed upward while the other’s face is drawn in the left side direction. Other elements include a heart tattoo with thorns, a wounded rabbit with some colorful flowers. This skin art is presented by a female tattoo artist based in Montreal. Females mostly prefer such inspirational snake tattoo designs.

The two-headed serpent is said to represent a variety of things in different cultures. The two heads represent both the Earth and the Underworld. It might imply indecisiveness or the presence of opposing viewpoints. The snake sheds its skin and emerges anew, which means rebirth.

Some tribes believe that tying its skin to the exterior of a house reduces colds and protects against the elements, while others think it brings rain or fortune. The snake on a dagger is a symbol of Mercury, the God of luck and trickery, and the guardian of thieves and tricksters, and was formerly represented as a serpent coiled around a knife. When everything is said and done, the serpent-and-dagger tattoo represents more than simply good vs. evil, but also the delicate balance that must be maintained between the two.

The tattoo is in bold black ink, which increases its appeal.

This is sketch-based tattoo work. The tattoo artist did a great job showing the white shades on the body of the snake. A red-inked line follows the snake throughout its whole body. The snake’s heads have a significant amount of red ink from where the line begins and stretches towards the end, which is the tail of the snake. The snake is crossly coiled, covering the front part of an arm. This form is known to represent manifestations in life. The tattoo is done just the way it was sketched. This illustration shows the creativity of the tattoo artist. Snake tattoos tend to have several meanings, which include the continuous renewal of life represented by this tattoo design.

This is a dark and light black ink tattoo of a snake. The tattoo placement is on the upper arm of the body. Such exotic design looks like an ornament worn on the hand. The aggressive snake is shown with its mouth wide open, flashing his tongue. In comparison, the peaceful one is keeping its tongue out. The upper part of the body is given a dark shade compared to the lower part of the body. This specific design makes the snake looks like a dragon. The coiled posture of the snake is drawn with such details that this design ultimately becomes eye-catching! Coiled snakes represent the circles of life. The double-headed serpent is both lunar and solar. They could also represent light and darkness or opposing combinations like preservers or destroyers. This snake tattoo gives the vibes of Medusa’s head according to Greek mythology.

The two-headed snake is a religious symbol in which the double heads are said to be all-knowing or omniscient. The snake sheds its skin once a year, which is a sign of rebirth in religious practice.

Snakes slither across towering trees, sandy or rugged terrain, and fast-flowing water with ease, and this is seen to be a god-like kind of movement. It is also interesting to note that the split heads of the snake are a reference to the flickering split tongue of snakes.

This is a Chinese Double-headed snake tattoo. They are mainly shown with their mouths wide open showing flickering tongues of the serpent. Out of many cultures, Chinese snakes are known to represent mysteriousness. These are because snakes are known to pop up from unexpected places. This snake tattoo meaning is for someone who likes to maintain privacy. Chinese snake tattoos are also known to bring good luck, happiness, and fortune in life. The scales on the body of the snake look like a turquoise mosaic holding great power. Snakes represent the opposing side from their expression. Although they have four eyes, only two eyes are portrayed with specific detail in the tattoo. Black ink on white skin makes it easier for small detailing work.

This is a tiny snake tattoo considered as a gap filler. The art style used here for this double-headed serpent is dot work. No facial features are shown here. The whole body of the snake is covered in a single pattern. This work is from Portugal based tattoo artist. Dark black ink fits well for the skin tone. Small snake tattoos are nowadays popular choices among girls. Additional benefits include that they are also considered spiritual symbols. This tattoo design gives evil as well as ancient vibes. The designs are oval, which provides a charming as well as deadly look to the snake. This delicate pattern differentiates this tattoo from other snake tattoos.

For those who believe in it, the skull and snake tattoo have a lot of symbolism. Many people will think the worst when they see a skull picture. Many individuals get a skull tattoo as a symbol of death and terror. Some people feel that the skull symbolizes our mortality and realizes that we only have so much time on this planet to spend with the ones we love.

The snake’s image has a dual connotation as well. Many people are unaware that the snake is a symbol of fertility in several civilizations. The size of this tattoo is determined by the individual getting inked. We believe this looks best on rounded-edged areas like your shoulder, calf, or other parts of your body.

This is a double-headed snake tattoo covering significant parts of an arm. Very bold designs are used for inner details on the body of the snake. This design was made at Tiger Tattoo Parlour. Snake wrapped its body in a spiral shape. Two fully formed heads are facing in opposing parts or directions. This can have different meanings, and it can represent conflicting ideas. One body and two heads can express a quiet side and an aggressive side. Such snake tattoos are known for making difficult choices in life. These snakes work independently despite having one body. Such opposite sides can mean they have internal batter going on between two snakes. People tend to be indecisive sometimes in life, and for them, this tattoo can be a good representation of their human nature and personality.

This is a traditional snake tattoo. It is a known fact that serpents represent fertility as well as a creative life force. Snakes are known to shed their skins, and due to that, they are considered apt symbols for rebirth, immorality, and transformation. This is a double-headed serpent tattoo where two snakes are showing their two flickering tongues. According to ancient mythologies, snakes are often known to represent knowledge, patience, and wisdom. Black ink is used to describe this small snake tattoo. Outlined spots are the pattern of the scales on the body of the snake. Above is the pictorial representation of holding hands here. One hand is okay, whereas the other one is a part of the skeleton.

Generally, snakes tattoo are not considered bad luck. In fact, in Japanese culture, they are said to protect from bad luck and illness. Did you know a snake wrapped around a woman means a balance in feminine and masculine energies? It may also indicate a balance in the relationship. Some more examples of a double-headed snake tattoo are