101 Best Chakra Tattoo Ideas You’ll Have To See To Believe! 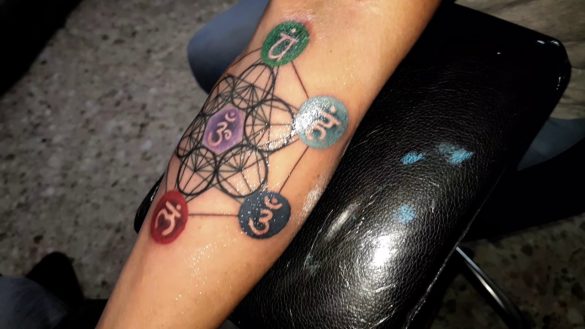 Looking for a special chakra tattoo? End your search as we have brought you the list of best chakra tattoos to ink that you will love.

The seven chakras are a symbol of physical and spiritual healing and growth.

There are seven power centers in our body. 7 chakras meaning says they are the centers that control all aspects of life.

Many people around the world, every day in 2021 are getting these tattoos more and more. Chakra tattoo designs symbolize that you either have or thrive for the harmonization of body, mind, and spirit. The basic idea is that any different negative emotion or experience, such as jealousy, anger, fear blocks the power centers, and when you open these free, you can achieve this harmony. Learn about the chakras and their meanings from the following information.

The original concept of chakras comes from India of ancient times. It is a symbol of the spiritual side, power centers of our body, and setting the full potential of both our physical and mental state free. Many movies, series, animes, such as ‘Avatar: The Last Airbender’, ‘Naruto’ have included the original chakra concept in the shows. Chakra tattoos are also extremely popular among people around the world in 2021.

The picture above is of beautiful tattoo art of the symbols of all seven chakras. They all are made in the colours of VIBGYOR. These colours are also considered as the colours of each chakra themselves. You can create your own 7 chakra tattoo with other styles of old and new, colours and add more elements, such as mandala.

You can have tattoos of each symbol of the seven chakras in black ink as the picture above. You can have them in colours as well. Come up with a chakra symbols tattoo that you like the best.

Starting from the root chakra to the crown chakra, the 7 chakras start from the base of our spine to our heads. That’s why most people around the world choose to have these tattoos in a row starting from the nape of their necks to the base of their spines. The tattoo work of the chakras may not be located in the perfect spots, but they help express the meaning nonetheless.

The picture above shows a magnificent tattoo design that a person inked on the back of all the 7 chakras along with kundalini serpents. You can create your own design which can be much simpler or complex tattoo art as per your personal choice.

The root chakra is thought to be the first and one of the main energy centers of our body. It is the first because we need to work our way up from there. In Sanskrit, the root chakra is known as Muladhara chakra. It’s situated at the base of our spine. Root chakra bears our sense of security, basic needs, and stability in the journey of life. The root chakra tattoos also represent the survival instincts we need in life.

The sacral chakra is the second energy center of the body and is known as the Svadhishthana chakra in Sanskrit. It’s located just below the belly button and above the pubic bone. It bears our senses of intimacy, passion, joy, and sexuality. Sacral chakra tattoos also represent creativity, money, and healthy relationships.

You can get your beautiful sacral chakra tattoo design just below the belly button with leaves and flowers as in the picture above. You can come up with a simple tattoo or one with more elements as per your choice.

In Sanskrit, the Solar plexus chakra is known as the Manipura chakra. It is the third energy center of our body. It’s located in the upper belly area. It bears our sense of control, personal power, and freedom. Tattoos of this chakra represent the confidence, identity, ego, and personality of the wearer.

The picture above shows a simple enough solar plexus chakra tattoo inked on the upper belly. You can choose some other different locations in your body and some other designs, colours and add elements of your own choice for your tattoo.

As the name suggests, the heart chakra is located at the center of our chest, near our heart. It is the fourth energy center and is known as Anahata chakra in Sanskrit. It bears senses of trust, peace, fearlessness, gratitude, love, connection with others, company of others, and everything related to our heart. Heart chakra tattoos similarly represent love, forgiveness, empathy, and compassion.

The picture above shows a tattoo of a heart chakra located at the middle of the chest of the wearer with a mandala design. You can choose a different location and incorporate other designs with it.

The throat chakra, also known as the Vishuddha chakra in Sanskrit is the fifth energy center of our body. It is located at the center of our neck. It bears the senses of proper communication, expressing ourselves, and singing praises of others and ourselves. Tattoos of this chakra represent responsibility, clarity, finding the power of voice, and our journey into the truth.

The picture above is of a beautifully coloured throat chakra tattoo inked at the middle of the neck of the wearer. Create your own tattoo with other added design or element that suits the tattoo and ink it wherever you want.

The third eye chakra is the sixth energy center of our body and is located at the forehead, between our eyebrows. It is also known as Ajna chakra in Sanskrit and also as the ‘seat of intuition’. It bears the senses of spiritual awakening, strong intuition, visualization, discernment, and self-awareness. Third eye chakra tattoos represent imagination, creativity, clarity, sixth sense, and knowledge of the mind.

The picture above shows a beautiful third eye chakra tattoo in gorgeous watercolours at the arm of the wearer. Getting a tattoo on the forehead can be hard and painful, but you can choose to ink it there if you’d like. Get your favorite designs included as well.

Crown chakra is the seventh and last and another of the main energy centers of our body. It is known as the Sahasrara chakra in Sanskrit and as the name suggests, it’s located at the crown or the middle of the head. It bears the senses of awareness, enlightenment, peace, joy, and serenity. Crown chakra tattoos represent the spiritual connection of the mind, body, and soul with the universe.

Sahasrara literally means ‘a thousand petals’. Hence, you can get a colourful open lotus with many open petals tattooed with a crown chakra design as in the picture above. You may also get more simple ones or more complex ones according to your likings to make your next new tattoo.

Now you have information about the chakra tattoo meaning the variations of new and old tattoos of chakra symbols. Now the answer to the question about where to put my chakra tattoo symbols is you can ink them anywhere you want. If you’re wondering about how much does a chakra back tattoo cost, you first need to find a good tattoo artist for your chakra tattoo art. Make your next best ever chakra tattoo by choosing from the list above.

If you liked this article, then check out our Zodiac tattoo ideas and Third Eye tattoo ideas.