10 Best Arm Women Tattoo Ideas That Will Blow Your Mind! 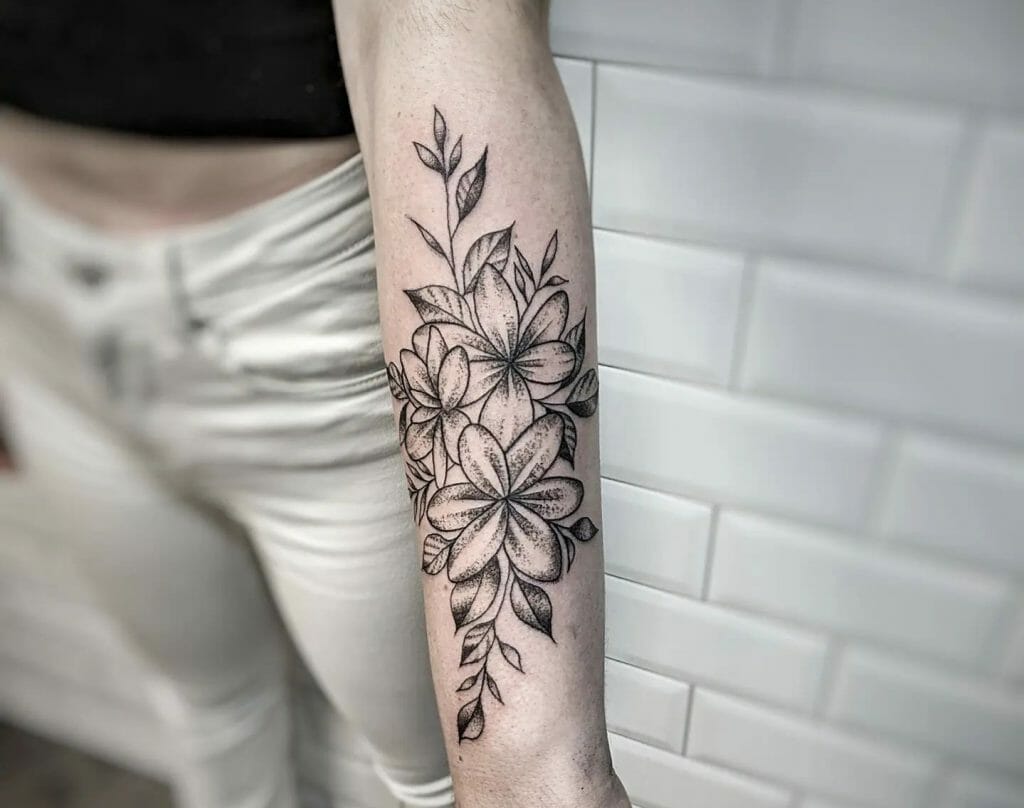 In the origin of tattoo history, arm women tattoo ideas have developed significantly from minimal tattoo designs to large ones.

To many, it may seem that women getting tattoos is quite a new concept but if you turn the pages of history you will find that it has an enchanting and deep-rooted origin.

When electric tattoo machines were invented in Victorian England, it became fashionable among women who attended tea parties to visit the tattoo parlours to upgrade their fashion. But the concept of tattoos as an idea varied for the upper class and the working-class women; for the upper-class women, it was a sign to show the feminist struggle and also to pacify the message that they were taking control of their own bodies while a working-class woman with a tattoo was looked down upon and considered to be nothing more than a prostitute.

Many women prefer arms, and feet as the best places to get inked. For the arms, the best spots include the upper arm, outer arm, half sleeve, full sleeve, inner arm, and lower arm while for the feet the ankle, calves, and thighs are the ideal places.

Rose tattoos are one of the most symbolic and beautiful tattoo designs done by women. This particular tattoo design reflects the highest level of passion and symbolically means love won or lost. It is a perfect balance of emotion and beauty and has been popular since the beginning of women getting inked. The rose tattoo can be done as a full sleeve tattoo or as a half sleeve, sometimes it can be also done on the entire arm.

While getting this tattoo design one thing must be kept in the mind, to choose the colour of the rose carefully as throughout history the different colours have demonstrated multiple meanings. The common pink rose symbolizes a new love, chastity, or remembering a loved one, again when done in white ink it reflects spirituality and mystery, yellow roses signify delight, comfort, and celebration in a solid relationship. The black rose tattoo is a bit dark as it represents death, void, and bleakness, and is done by someone to show compassion for the one who she has lost. So one must get this tattoo according to her own characteristics and the number of flowers also must be counted while getting inked by the tattoo artist. A single flower represents oneself or her loved one, two flowers represent couples, and more than that mostly represent a family.

The origin of the compass arm tattoos is quite old and was generally preferred by sailors and fishermen. They believed that this would not only bring them a fortune but will also guide them home safely. Travellers and wanderers considered it as a focal point, a good luck charm for safe travels and even the arrows symbolically meant a promise of adventure. In the modern age, the tattoo ideas have changed and this design is both done by men and women alike.

This cool design can be either done in an eye-catching colour or simply using black ink. It can be done as a forearm tattoo or can be placed on the lower or upper arm. It can be either done with a simple approach or can be done in a hyper-realistic manner. Women prefer this design as it has many meanings like it can reflect the consistency of one’s goal in life and her values, sometimes it is inked to show loyalty to one’s partner and to support them through thick and thin, it can also demonstrate the independent choice and nature of a person.

The wolf is one of the most majestic beasts in the animal kingdom known for its strength, courage, fearlessness, and beauty. Like the previous tattoo of the compass it was earlier only popular among men but as time went on this has become equally popular among women. These arm tattoos are mostly done in black ink and done as forearm tattoos, or as a half sleeve tattoos.

Wolves mostly stay in a pack with their children who surprisingly stays for a long time compared to any other animal cubs. Now a woman getting this tattoo represents his bond with her family just like a wolf pack. As the wolf pack hunts and takes care of each other, so does the one who gets this tattoo. Not only does this wolf tattoo signify a symbol of loyalty but also the friendship that is formed while raising a family. Sometimes the concept of the lone wolf is also the reason some women get this design, which reflects her story as a survivor in this cruel world.

Done from the upper arm to the lower arm these arm tattoos have been popular since the dawn of tattooing traditions. These arm tattoo ideas can be done either in black ink or in a vibrant colour palette and look aesthetically soothing holding a meaningful design value. From the very earlier days, the floral design was used as a means to establish some kind of identity for oneself. These flower-based tattoo ideas are done in detailed design and look like beautiful artwork.

Now the popular flowers which are used to ornate this sleeve tattoo are tulip, lavender, sunflower, daisy, and many more. Each flower has its own peculiar meaning in different cultures and is done by women according to their characteristics. Like the tulip is considered to be a symbol of chivalry and charity in England, in the Netherlands it is considered to be the national emblem, and in Turkey, it is a reference to beauty and transcendence. Lavender is known for its unique colour and unforgettable fragrance and is mostly done by someone who is charming.

The story of the legendary koi fish is very popular in the Asian culture, where it is believed a single fish battling all odds swam against the current in the Yellow River to reach the top and the Gods blessed it turning it into a golden dragon. The first thing that this pretty tattoo represents is the symbol of determination and perseverance. This particular design can be inked as a forearm tattoo, and as an upper arm tattoo.

One must get this tattoo done after understanding the significance of each koi colour and also by matching it with their skin tone. Gold, Orange, and Yellow are the most common colours used which reflect fortune, prosperity, and wealth, the red colour signifies strength, motherhood, bravery, and intense love, and blue koi symbolises calmness, serenity, and peace.

These tattoos have become quite famous as feminine designs in the modern era. The Phoneix and the Dragon are the two most popular images that are selected as arm tattoo designs by women. They can be either done in black or fused with red and yellow.

The Phoneix portrays in a wonderful way the cycle of life including birth, death, and rebirth. It is also compared with the Sun and is regarded as the source of power and strength. Women who believe in themself and are confident mostly get this tattoo done. It mostly blossoms when done as a sleeve tattoo, either in the upper arm, lower arm, inner arm and sometimes even in the junction of the arms.

These beautiful arm tattoo designs became very popular from the times of the Victorian era. Done with black lines and minimal shading they were not visible to the crowd easily and still were a source of pride and a mode of resistance for the upper-class women.

In the modern era, the concept of the minimalist approach has changed and now it adheres to the philosophy of less is more and also gives separate meanings to separate tattoo designs. The cross as a minimal tattoo design has become very popular and represents devotion to the Christian Religion and is done by women who have a sense of high spirituality. The cross is a representation of unconditional love and sacrifice and can be done in any portion of the arm.

Written in different techniques of letter style and taking up only a small space the quote arm tattoos have become one of the new popular arm tattoo designs among women. They can be done as a half sleeve, on the inner arm, or as a forearm tattoo. They are mostly done in black and provide a great idea to represent a woman’s desire.

These arm tattoo ideas can contain anything in written format from birth dates, favourite poem lines, quotes from movies, and whatnot. This quote arm tattoos for women have become one of the most powerful symbols to show that women are untamable free spirits of this world.

One of the most common arm tattoos found among women is the lotus tattoo. They can be either done in black or with a pink hue. In Hindu culture, it is referred to as the Padma and is a powerful symbol that represents beauty, spiritual awakening, and purity.

It is mostly tattooed by women who have risen above the temptation and want to become someone better. These flower tattoos were mostly preferred as body art but nowadays are tattooed on the forearm, upper arm, lower arm, or the inner arm.

The geometrical designs are one of the most poignant styles as they cover the concept of upper to lower arm tattoo ideas. They are mostly done in black and represent harmony, order, and stability. Each and every shape has its own meaning and they can range from personal to universal.

The figure circle demonstrates the endless cycle of life whereas the triangle symbolises strength and harmony, again the square is the symbol of balance and stability. They are done by women who want to express multiple feelings combined with a stunning and magnificent design.

From getting tattoos as a part of body art to having them as a symbol of protection, the tattoo done on women has different meanings in different cultures. Like in the Egyptian Culture the idea of when a woman got inked was a symbol of protection from deadly childbirth and painful labour while in the Polynesian culture it was regarded as a sacred symbol and also notified the social status of the particular woman. In the modern era, it has become a style statement with varied meanings.

Other women’s arm tattoos one can have if they are not satisfied with this list are: