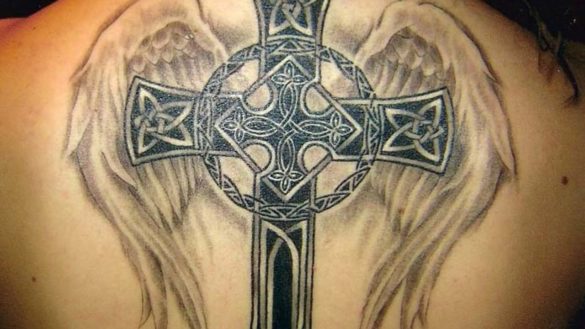 Interested in getting a Celtic cross tattoo and want to know the meanings associated with this symbol? Find the answers to all your queries right here!

The Celtic cross symbol, which originated in Ireland, is one of the most precious motifs to the Irish people and is associated with positive meanings, throughout the world.

What Does A Celtic Cross Tattoo Mean?

Generally, Celtic cross tattoo designs are symbolic of Christ’s Cross. It is a mark of faith and spirituality for a lot of people, and especially to the people of Ireland. The circle around the Cross is thought to be a symbol for the sun-God Invictus, who belonged to ancient Rome. Hence, a Celtic cross is a blend of Christian and Pagan faith. Altogether, Celtic crosses represent the very positive aspects of life, like faith, love, hope, and so on. Hence, Irish Celtic crosses can give you the strength to carry on in life.

With the meanings and origins of Celtic crosses in mind, check out some of the best Celtic cross tattoo ideas below!

Back tattoos can be made quite elaborate or small. If you are looking for the former option, then check out this Celtic cross tattoo. The cross is featuring the typical knot designs of the Celtic culture, which are making this design look quite aesthetic and intricate. The wings in this tattoo are quite detailed and elaborate as well. Such a depiction of the Celtic cross tattoo design can be a way to symbolise how Christianity can set you free.

Dagger tattoos are ideal for people who have fierce personalities. However, in this tattoo, the Celtic cross has been portrayed as a dagger, making this tattoo quite a modern take of traditional and typical Celtic crosses. Each side of the dagger is bearing a Celtic Trinity knot, which represents the Father, Son, and the Holy Spirit. Hence, this tattoo is the perfect combination of religious values and fierceness. The shading done on the blade of the dagger is quite amazing. Given the size of the tattoo, you can get this inked on your arm as a half-sleeve tattoo.

Necklace tattoos are the best, as they literally become an accessory on your body. So, if you want to look fashionable, but also have a tattoo that reminds you of your religious beliefs, then this tattoo is perfect for you. The chain has been inked to look quite realistic, while the Celtic cross itself is bearing intricate Celtic symbols. The circle around the centre is also looking quite bold and aesthetic.

A forearm Celtic cross tattoo that carries such deep meanings is hard to come by. Hence, if you want a beautiful and religious tattoo to cover your arm and remind you to keep your faith, this image can be your biggest inspiration. The cross in this tattoo is bearing intricate and detailed Celtic knots, that look perfectly intertwined and eternal. The shading on the cross is also giving the design an amazing look. A tattoo like this would be the perfect nod to the Irish heritage and Celtic heritage.

Ever since the Celtic cross came to be as one of the most popular tattoo ideas, people have been associating this Irish symbol with lots of other elements. Hence, a Celtic cross tattoo with a rose on its centre can be your way of interpreting and representing your own Celtic cross. This is quite a unique Celtic knot cross. The knots have been inked against a black background, forming the perfect contrast. The bright red rose is going well with the overall design, as well. Such a design would look great on the arms or chest.

Since the Celtic cross is such a big part of the Irish heritage, why not get a cross tattoo that shows your respect for this culture? Here, the shape of the cross is quite unique, due to the black and white knot artwork. The green Irish shamrock is inked right on the centre of the cross. A Celtic cross tattoo design of this sort will carry deep religious and cultural symbolism, in a non-traditional way, and can be gotten by both Pagans and Christians.

A chest tattoo design can be quite tricky to pick, as the options are plenty, but not every kind of tattoo is suitable for everyone. So, if you want a tattoo that can match any kind of personality, this option is the best one. The size of this tattoo is quite big and hence, the detailing is absolutely impeccable. A Celtic knot cross tattoo design of this sort can represent your Irish heritage and culture well. You can ask your tattoo artist to modify this design to include more kinds of Celtic knot motifs.

No matter what your beliefs are, you surely believe that dragons are the coolest. Hence, a Celtic cross tattoo with a dragon wrapped around it will be nothing short of art. As you can see in this tattoo, there is a bluish-green dragon with purple eyes behind the Celtic cross. The colour of the cross is also matching to that of the dragon’s. However, there is a slight difference in tones, and hence, a contrast is forming. Not only is this tattoo very vibrant, but it is also quite detailed and represents the amount of time taken to create such a wonder as a sleeve tattoo. Such Celtic crosses are rare to come by.

Tribal patterns are popular throughout the world, and tribal tattoos featuring Celtic heritage can be quite enticing. In this outline tattoo, the tribal motifs have been inked with thin lines, which is making the tattoo appear quite neat and clean. The centre and each arm of the cross is bearing knots, making this a traditional Celtic knot cross tattoo. Such a Celtic tattoo represents both Christian and Pagan values while looking quite chic.

If you want a Celtic tattoo on your hand, check out this Celtic cross tattoo. Most of the time, the Celtic crosses were chosen by people are quite large in size. However, a small tattoo can be just as beautiful, and this tattoo is the perfect example of that. The intricate line work to create the tribal patterns in the arms of the cross in this design is noteworthy. Even the centre of the cross is featuring the Celtic Holy Trinity symbol with a circle in the middle, to mark the Sun God. Such tattoos will almost always remain exposed, and grab everyone’s attention.

With all this knowledge about the history of Celtic crosses, various Celtic cross tattoo designs, and its religious symbolism relating to the Christian faith and also Paganism, you can easily pick a tattoo to put this ancient Irish symbol on your skin, permanently. One of the best things about Celtic cross tattoos is that they can be gotten in any size or shape. You can associate these crosses with Celtic knots, any Christian symbol that represents your faith or adds value to your life, or even add the colour green or a green shamrock, to make it Irish. Tribal tattoos are also quite meaningful, so you can add tribal symbols to your tattoo, as well. The meanings associated with the Celtic cross might keep changing, but it will continue being a work of art.