101 Best Celtic Armor Tattoo Ideas That Will Blow Your Mind! 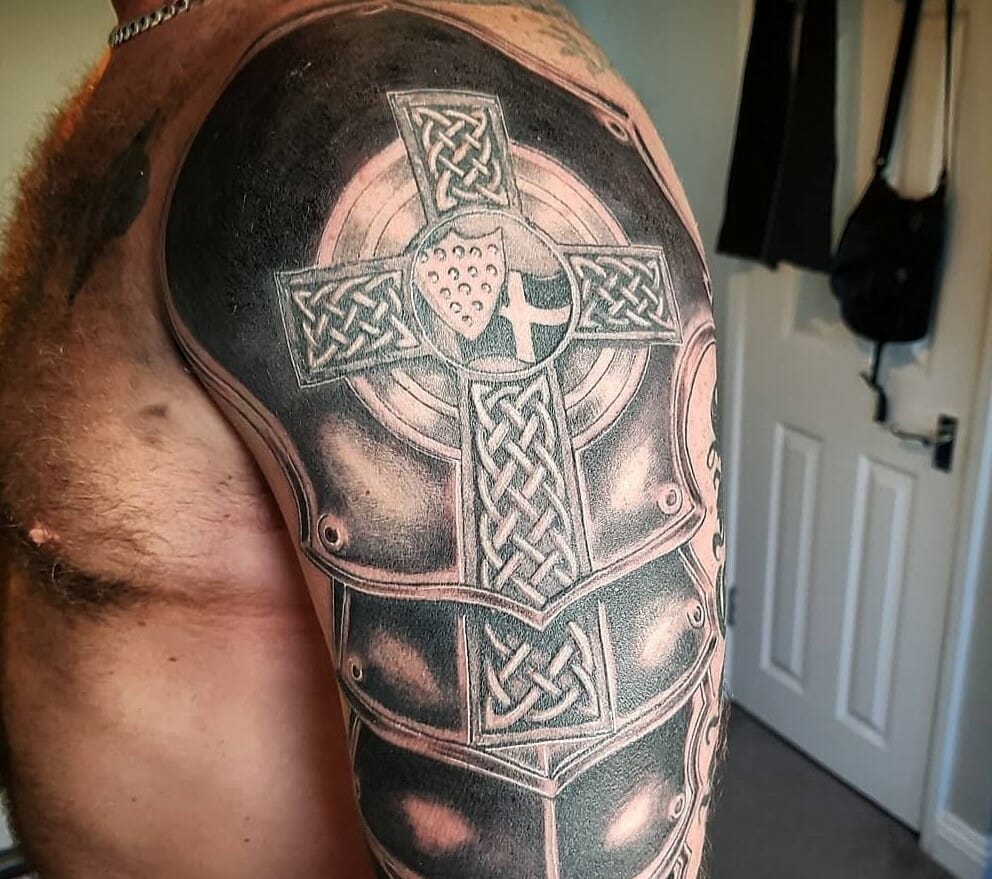 Centuries have been passed away, and the symbolization of armour remains the same. Check out these very intricate armour work tattoos.

If you look at the metaphor of armour tattoos, you’ll discover that sometimes it is thought that the body armour may act as a barrier against wickedness, which makes sense given that armor’s primary job in the past was always to defend people.

Justice, heritage, protection, battle, determinations, chivalry and discipline. All these words might come to your mind too when you hear the word “Armor”.

Exceptional individuals have been fighters for centuries, so it’s no wonder that somehow this sort of tattoo has become so trendy in current times. People chose armor tattoos for a variety of reasons, and it has a unique significance for each person. For some, the picture is simply a cool body adornment; for others, it represents their power, willingness to battle for their ideas, or a method of displaying their personal philosophies. Some individuals utilize the picture as a defensive weapon, as a spiritual armor, as protection against life’s challenges, and so on.

This is an example of one of the finest colour combinations and conspicuous artwork.

The edges of the whole tattoo are made to look like that it is hidden under the skin/body. The cuts on the skin at the lower side of the tattoo will give you an idea of how realistic it has to look this good. The whole armour structure has given the metal, i.e., copper, bronze and iron-like colour and texture. The cracks on the right top of the shield look like that the shield has been used and helped at protecting. Also, we can see a Celtic trinity knotwork at the centre of the armour.

We definitely suggest this be your choice finally if you want some images or examples of tattoos to incorporate on and enhance your biceps.

We can see a Celtic cross at the centre of the tattoo; inside the cross tattoo, we can see a sailor’s knot too. Both of them have a very deep meaning. If you see the sides of the tattoo, you can see the design has been made in such a way that it looks like the skin has been torn apart by the shield. There is a lot of sense of bravery in this tattoo.

The knot of a sailor represents camaraderie, affection, serenity, and love. It’s a pretty simple knot to make, but it’s also one of the most powerful. There are also no limits to the variation here for such Celtic heritage designs and styles, and you can decide to create new line elements with better shading. This will look great on the forearm sleeves and on the leg as well.

Even if you might not be a tattoo artist, there is no way that you can not say how difficult and small detailed this tattoo design is. Of course, the work has been done well, the outcome of the tattoo suggests.

We can see multiple types of knotworks including, sailor’s knot, trinity knots and Dara knots and so on. Every armor tattoo has something related to this history.

We can see the four layers of this armour. On the top layer, there is an interlinked design of 4 knots that is inside and surrounded by the big sailor knot. On the second layer and the third layer, we can see the repetition of the same knotwork, and on the last layer, this is a huge knotwork design that shows snake-like creatures facing opposite each other. You can decide on having such designs and patterns on the chest as well.

Note down the most appealing looking shoulder tattoo.

We can see the top layer of the tattoo that has an accurate design of a trinity knot, meaning immortal life, as true warriors.

The edges have been given reddish ink and look. We can see the nails are arranged in order to make it look more real. The bottom two layers have the same design; the continuation is incredibly done.

Do not tell me this is not one of the most continuous and complex artwork you have ever seen!

From the start of the Vikings story, their armor has always been protecting and providing courage to the great knights or its wearer.

This knotwork has the same continuous patterns. The background is given black inked so we can focus more on the knots. Knots have been stretched and circulated around.

This can look very good as a sleeve tattoo and a leg tattoo.

Were you here for a full sleeve tattoo? Do not worry; we got you!

At the start of the tattoo from the forearm, we can see a crossed Celtic tattoo design. Going upwards, we can see a belts’ hook tied around the bicep area. The back of the hand is filled with numerous knotworks.

The artist has also used coloured inks for small detailings.

The perfect chest tattoo for anyone! The small interconnected triangles are again connected with bigger triangles. Behind the triangles, we can see the free design artwork; the final layer is of the armor, which has given the copper-red looks from the edges. Three nails have been drawn on the top left and right sides.

We just do not want a little bit of the knotwork; we want all of it.

On the forearm, we can see a skull, and on his forehead, there is another knotwork done. On the biceps area, there is a trinity knot, a sailors knot and what not? The whole design is very well detailed in black ink; you can see eyes on the upper part of the tattoo and a lot of flows of knots going here and there.

The last three layers of the design have a Celtic spiral knot. Which represents companionship, compassion, serenity, and passion. It’s a pretty simple knot to make, but it’s also one of the most powerful armor tattoos.

The trinity knot pr he Celtic knot work is placed on the top part of the tattoo on the arm. Many people believe in getting Celtic tattoos inked.

The chest part of the tattoo has shown the entrance of some dynasty. We can see two lions standing on their feet facing each other directly.

Even though this is a tattoo depicting war elements from Celtic and Viking mythology, this can be a great choice to modify into a Celtic armour tattoo symbol! You can also add some animals to such designs to show the links the Celtic culture had with nature! The tattoo has such art and style that anyone would want to wear it with pride!

If you liked the above designs and are still looking for more, here are some you may like

The symbolism of a tattoo is altered depending on where it is placed. Whenever a tattoo is placed on the shoulder, for example, it represents a warrior’s spirit. The armour tends to cover a portion of the chest as well as the heart. A large tattoo might be lowered to the ribcage or cover a portion of the back. The form of the armour is determined by the owner’s intention to highlight the figure’s integrity. People who battle for their values, are used to struggle and can survive any life scenario may find this choice fascinating. These armour tattoo designs make you aware of the past of the Celts and Vikings in Europe.

It is advisable to use artwork that expresses your individuality while designing your armour tattoos. People usually get tattooed with something that they can relate to and something that is important to them.

We hope you got an idea and a clear mind of which tattoo you should go with. Whichever you get, we would always want you to wear that symbol with pride!

What is a celtic armor tattoo?

A Celtic armor tattoo is a type of body art that features an ornate pattern inspired by ancient Celtic symbols and artwork. These tattoos typically include intricate knotwork and interlocking patterns, often with mythical creatures such as dragons, griffins, or other animals incorporated into the design. The complexity of the patterns can vary from simple knotwork to complex designs with multiple layers. Celtic armor tattoos are also often combined with other elements such as flowers, animals, and other symbols to create unique compositions. They have become increasingly popular in recent years and can be found in a variety of styles, colors, and sizes. No matter the design, all Celtic armor tattoos share a common thread – they represent strength, courage, and protection. Thus, they are a popular tattoo choice for those seeking to symbolize their own personal strength or that of a loved one.

What does a celtic armor tattoo represent?

A Celtic armor tattoo typically represents strength, courage, and protection. They are often used as a symbol of personal power and resilience. The intricate designs featured in the tattoos represent spiritual growth and development as well as a connection to the ancient Celtic culture. Additionally, many people opt for these tattoos to honor their heritage or pay homage to history. No matter the meaning behind them, Celtic armor tattoos are a beautiful way to honor one’s strength and courage.

What are the different parts of a celtic armor tattoo?

Celtic armor tattoos typically feature intricate knotwork and interlocking patterns which are the main components of the design. These patterns can be combined with other elements such as animals, flowers, and symbols to create unique compositions. Commonly featured animals in Celtic armor tattoos include dragons, griffins or other mythical creatures. Additionally, many people opt to include their family crest, initials or other meaningful symbols in their Celtic armor tattoos. The colors used for these tattoos also vary and can range from traditional black to bright vivid hues. No matter the style, all Celtic armor tattoos share a common thread – they represent strength, courage and protection.

How can I design my own celtic armor tattoo?

Designing your own Celtic armor tattoo can be a fun and creative process. Start by researching the different symbols, animals, and patterns associated with this type of body art. Once you have a good idea of what elements you would like to incorporate into your design, create a sketch or find an image that inspires you. You can also consult with a tattoo artist to help you create a unique and personal design that captures the elements of Celtic armor tattoos. Finally, make sure to choose a high-quality tattoo artist who has experience with traditional Celtic designs for best results.