10 Best Celtic Half Sleeve Tattoo Ideas That Will Blow Your Mind! 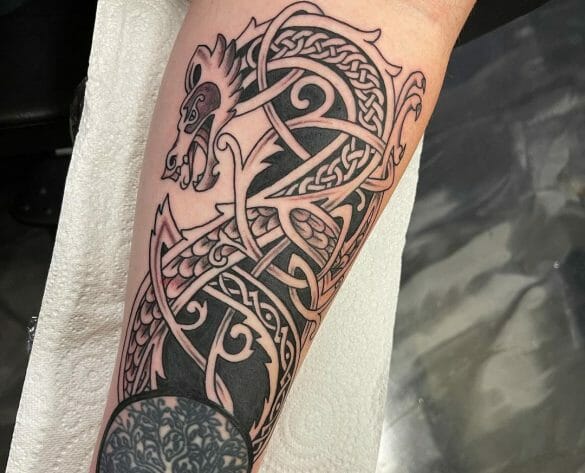 Many people really choose Celtic tattoos because they like the beauty of them and who would not?

They are the perfect example of abstract and symbolisation. Also, these tattoos are very intriguing because they are eye-catching.

Celtic signs were utilised to connect, and they mostly alluded to their natural environments, such as water, air, sun, moon, and others. That is also why they are so well-known. Life, death, immortal life, and spirituality are all explored via knots, which are the most prominent Celtic symbols.

Back in the days to seem fearsome to attackers, Celtic knights and Celtic warriors wore blue-coloured tattooing. The tattoos worn by fighters are identical to the old Celtic tattoo motifs that we recognise today.

We can see that the style and feel of the culture in Celtic art and Celtic tattooing. The exquisite Celtic tattoos have a fascinating quality to them with deep meaning. So If you are looking for something like this, read it to the last.

We can see a very conspicuous and well-detailed tattoo with geometric patterns and designs. It is a Dara Celtic knot tattoo. The designs are very greatly following the constant flow and pattern. We can easily see two different kinds of knots, the broader and the narrow ones. In the right top corner, we can see two eyes and small circles, depicting it as the top view of a snake. The proper sleeve tattoo is here, and it could also go on your legs or arms.

The Dara Celtic knot is a representation of the oak tree’s roots, and it also represents an inner source of strength. Celtic knots were utilised as ornaments, spiritual blessings, and educational tools. The Dara Celtic Knot’s symbolic complexity plainly signified strength since it was associated with nature and oak trees. In difficult times, the old Celts would invoke the symbol to bring courage and internal insight.

The Celtic Traditions And Art

We can definitely see different kinds of knotwork and trinity designs on this tattoo. Is not it amazing how these tattoo designs can give a whole new look to the whole human body?

The tattoo also covers the upper chest. We can make different kinds of intricate patterns, Celtic knotwork, appealing Celtic designs and whatnot. The top big pattern is symmetrical and neat. Below that, we have three different kinds of geometric designs following different meanings. We can also see the sailor’s knotwork. This pattern, which depicts two entwined ropes, may have been developed by sailors as a way of remembering their loved ones throughout lengthy travels. Loyalty, affection, peace, and love are all represented by the sailor’s knot. It’s an incredibly basic knot to make, but it’s also one of the most powerful.

This will look great on your skin!

The Simple Design But Yet Not So Simple

We can see the main elements in this tattoo design is the middle triangle and the knotwork. The artist has used lines more than circles. The combinations of leaning and standing lines and shapes are exceptionally done.

According to the Celtic culture, a Celtic tattoo may actually represent your link with people, your faith, or, most crucially, your connection with your ancestry in a variety of ways, from honouring friendship to being proud of your offspring.

This tattoo design is another design that will just become your favourite. This tattoo design has very detailed and tidy levels of patterns. At the bottom, we have sailor’s Celtic knot and going upwards; we have different designs of knots having deep meanings.

The two ropes interlaced in this Celtic knot, according to tradition, were fashioned by sailors, during long journeys or while preparing for their next departure. It is said to be a way for them to commemorate their loved ones. It’s a symbiotic relationship in life that can’t be severed.

We can see an eagle-like bird on the right side of the tattoo, and on its wings, we can see beautifully carved knots. On the left bottom, we can also see Celtic dragons. We have a Sailor’s Celtic knot, which looks like two ropes have intertwined, and at the bottom, we have the most astonishing Claddagh ring, which is hands holding a heart that is crowned. This tattoo alone represents so many deep meanings.

The Claddagh tattoo is frequently given in memory of someone special to the person. Despite overwhelming proof of its origin, one picture appears to (incorrectly) spring up again and time again after it comes to Celtic emblems for love.

For us, the best part of the tattoo is the magnificent Claddagh, of course. However, the Claddagh is a lovely Irish emblem, which has nothing to do with the Celts. The Claddagh sign was created in a little fishing hamlet of the very same name in County Galway.

This is another immaculate neat artwork that has ever been done by some tattoo artist.

This tattoo design has different sizes of lines and shapes. The patterns have a smooth flow. We can see the hand band like a design on the wrist and upper hand. On the other hand, we have Celtic eternity knots, which are lines that are interlinked.

These Celtic knot tattoos are particularly relevant to this notion since it signifies that everything about life is interconnected and will recur indefinitely. If the notion of eternity in the creation and in the cosmos itself appeals to you, then this tattoo is a terrific way to remind yourself of your values.

While this is a full sleeve tattoo, you can easily modify it to become a Celtic half-sleeve tattoo design. Sixty per cent of this tattoo is knotted like a sailor’s knot, and some are going in the same direction while some are opposite and some are crossing each other. But, we can see the main top highlight of the image that is the trinity knot or Triquetra and outside of this knot, we have a sailor’s knot, which makes this part more captivating.

The Triquetra is regarded to be the first spiritual representation in Celtic history. One of the most stunning Celtic symbols is the intricate Triquetra, also called the Trinity Knot or Celtic Triangle, which depicts a circle intertwined with a constant three-pointed figure.

Half Sleeve Tattoo That Represents Faith

Another interesting Celtic tattoo design is here with a mixture of symbolism and fashion!

There is a continuous circular pattern looking like the wheel of something, meaning always keep ongoing. We can see an eye just in the middle of the tattoo. The lines look like stems of a tree crawling upside, giving it a natural look. You can have more symbols in the tattoo, like animals, and we are sure that the new design would look great on the arm!

If you are bored of Black and white tattoos and want to add some bright colors, then this knot design is just for you. This tattoo is great if you want a more colourful Celtic tattoo that also looks like classic Sacred Geometric knots. The colours, as well as the connecting between the knots, are lively and complex. This pattern is ideal for wrists, ankles, elbows, wrists, and other body parts. Regardless of where you install it, this design might look fantastic.

This tattoo has a blueish-grey coloured background, which actually helps to enhance the tattoo design. The knot work is well detailed and super neat. On the second picture of the slide, we can see the top two lines have been tied up firmly. On the right bottom, we can definitely see the trinity knot that has a heart in the centre; what an adorable idea!

Celtic sleeves are often black, with numerous knots shown as mathematical forms that appear intricate and have several aspects in which you may easily become confused. This tattoo is no different, and it looks gorgeous. The interconnecting of many symbols, such as Triskele and the Trinity Knots, could be seen. They resemble chains and lend dimension to the overall design.

The middle of the tattoo is of a dotted texture, and it is a combination of using different inks and formats. We hope you got what you were looking for.

Celtic tattoos are a popular option among tattoo enthusiasts. Celtic tattoos, like tribal tattoos, are generally black in the pattern but come in a variety of tints and colours. Depending on your choices, they might be basic or sophisticated.

The more sophisticated the design, the more money you’ll probably pay. However, don’t skimp on your design. Keep in mind that it is something you’ll be content with for the rest of your life. Wait till you can afford your ideal tattoo, or seek an estimate from such a different tattoo artist if you simply can’t afford it now.

The Celtic heritage contains many exquisite knots and has a long history of legends. Just because of that, it’s simple to find the one which speaks to you. The majority of people who get a Celtic tattoo are from Ireland and proud of their culture. It’s also worth noting that practically every knot is a continuous movement that illustrates the eternal nature of the notion it represents.