10 Best Break Free Tattoo Ideas That Will Blow Your Mind! 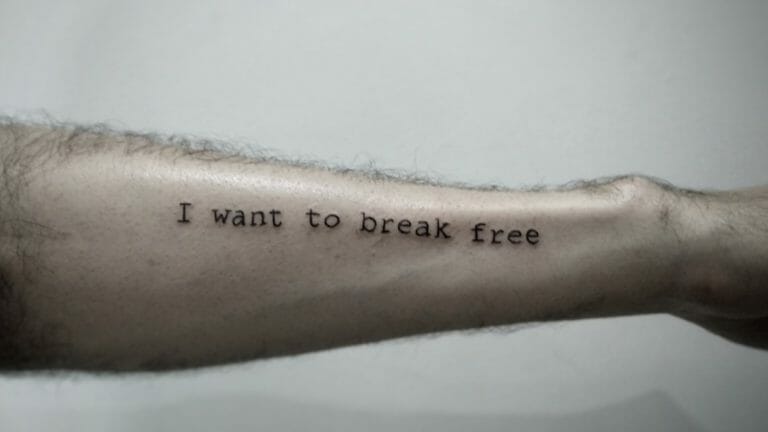 Freedom is everyone’s birthright, and a tattoo would be a great way to vocalise that. Hence this list of break free tattoos might act as an inspiration.

Everyone deserves freedom, and no one should have to beg for it.

Body art often gives us a platform to be vocal about things that sometimes remain unspoken, whether it is about beliefs or emotions or thoughts that define our personality.

Freedom is such a powerful thing; if we try to go back in time, we do not even have to go into much depths in history; we will be able to see how freedom was a luxury. But something that is sad is that freedom often does not go hand in hand, even today when people should be feeling more liberated. In a life that is always moving at such a fast pace, sometimes the real definition of freedom goes unnoticed. Freedom could mean a lot of things and often vary from person to person. It all depends on the perspectives. For someone, it could be breaking free from stereotypes; for someone, it could be being able to talk about their desires freely; for some, it could be breaking free from their own past self, and sometimes it could be as deep as actually breaking free from the captivity of someone. Something that means freedom to you might not be the same for the person next to you. As a matter of fact, there are even different symbols of freedom to represent and depends on the wearer. But these different kinds of symbols help you to show your viewpoint of freedom and your story. If you are on an adventure to find a few break free tattoos that will offer you some inspiration, then this curated list might come to your aid.

When we think of captivity, wired fences often used in jails to prevent criminals from escaping is one of the first few things that come to mind. Hence wired fences are one of the symbols of control. Birds flying, on the other hand, could be used as an ultimate symbol of freedom, as they are not caged anymore; they have the liberty to fly as high as they want. This brilliant fence to bird silhouette tattoo that pictures a wired fence turning into free birds could be a fantastic way of saying that someone has finally broken free from the control. It could be a representation of finally being able to be a free spirit after a long restrained hard time. If you feel like you broke free from certain things or someone, this tattoo would be a great way to portray your recently achieved liberty.

As previously mentioned, freedom could have a lot of meanings depending on which angle one is looking from, one of which is freedom from one’s own self. We often do not realise we can be our biggest enemy. Our fears often stop us from doing things we would love to do. We refuse to come out of our comfort zone, which can be a toxic one. This tattoo with a bird inside a cage but with an open door unwilling to come out might be a symbol indicating how one gets so used to a certain way of living that they make it their comfort zone even though it is toxic. So much so that they are not willing to live a better life because of the fear of the unknown. Hence the line “Beyond fear lies freedom” as one needs to conquer their fear and be reborn like a phoenix.

A sophisticated, minimalistic tattoo that might look like a very simple tattoo design, but it, in fact, has a lot of depth and speaks a thousand words. We often associate flying with freedom and birds with independence. Hence, this tattoo which already has free written with the birds flying, represents freedom. One will realise the design is very intricate the more one sees. The details of the bird, from its wings to the different shades of its body, are very skillfully done as its features are highlighted magnificently with the black ink. A freedom tattoo made for all the free-spirited people out there who “fly where their dreams take them”. And with the bird tattooed on your skin, you can flaunt your free-spirited personality. Of course, you can always customise it by changing the breed of the bird or can add colours and so on.

Swinging With The Birds Freedom Tattoo

A wonderful abstract design that holds a lot of meaning. The concept of this specific design is brilliant as it manifests the desires and dreams of our souls that we want to fulfil. The painting of the woman who is swinging on the swings with strings attached to flying birds could be a symbolism of her swinging in their dreams. The design could symbolise her life’s desires being fulfilled, and she is free as a bird. It represents the absolute bliss one gets when they are able to reach their dreams, comparing it to the swinging—a tattoo for someone who believes that following their soul makes a path closer to their dream. With sinuous details on the balloon, this design could be turned into a prosperous ink tattoo with an experienced tattoo artist. So always make sure to find a capable one.

Abstract Tattoos have been known for their distinctive nature of portraying one’s story. This cute yet smart abstract tattoo with a girl with cloud as the head and birds flying her whole body could be assumed as a sign of showing “Freedom of Mind”. What makes it so different is the fact the birds are represented as balloons with strings that are tied with the girl’s head, probably to show her mind is finally capable of flying high with imaginations and dreams. The shading of the girl’s shadow shows how minutely it has been made. The colour of the clothes and the sun in the otherwise black and white tattoo somewhat represent a little brightness in an otherwise dark life.

Dance always resonates with happiness, liberation, joy and freedom. Hence this freedom tattoo with the girl dancing and the flower petals surrounding her body almost taking the shape of wings is everything that screams power, hope, energy and freedom. The way some petals float around her as if forming an aura is the aura of liberation. Added feathers would add even more meaning to it. It could mean she has finally broken free from the shackles of confinement, has taken rebirth and learned to live life the way she wants. This ink is a perfect art for dance lovers around the world, for whom dance acts as a way of searching for freedom.

It would’ve been a waste if this Freddie Mercury tattoo, I want to break free themed, wasn’t included in this list. Not only the song “I want to break free” by Queen is iconic, but so is their music video where they were all dressed in feminine clothing. It has since been an anthem against suppression and vocalising freedom, as their lyrics themselves clarify. This tattoo with Freddie Mercury’s female alter ego and the quote “but life still goes on” is as iconic as it can be. Although not written by Freddie Mercury himself, who was a part of the LGBTQ+ community, this song could be assumed to be a song that he used to portray the frustration of the oppression of the community. Depending on the way one sees it, this tattoo could be used as a symbol of fighting back the maltreatment towards the community.

This feisty tattoo with a person fighting and breaking free from the chains could be a fantastic way of coming out from a place that stopped you in life and finally being able to enjoy life. The minor details like the broken chain or the fire-like aura of the person done with all the fiery and strong colours to represent strength and power to break through are very thoughtfully done. Whether breaking social barriers and norms or absconding from your own blocked mindset, this tattoo would be able to manifest it all.

This gorgeous gradient coloured ink flower tattoo with freedom quoted beneath it is minimalistic yet beautiful. The different colours create an elegant ombre effect and “F” starting from the stem of the flower is a brilliant and unique ink idea. It will also be a great idea if you decide to use the same gradient effect in the letters of the word. It is absolutely not necessary to use this very same flower. As a matter of fact, choose a flower that represents you the most and add colours in whatever way you desire. You can also add other details and create a tattoo of your own that has its own individuality.

Everyone deserves to enjoy it without anyone trying to take it away from them. Freedom should always come to you without any begging. If it does not come to you as easily as it should, then fight for it. This tattoo of the shackles being broken by an axe with the quote “Never beg for freedom” is the epitome of the fact you should fight for it. Hence the design portrays the fighting part that some need to do to achieve their freedom.

The designs mainly represent freedom and the idea of power in your life. Whether you have overcome hardships from life recently or long back, this list of tattoos that represent freedom, liberty and even more meaning would be a great way to pay tribute to your hard work. Let the world know you are free from the chains of the captivity of life. But most importantly, when you feel down, this will never let you forget where you came from. Treat these freedom tattoos as symbols of newly found happiness or a symbol that provides you hope for your future or use it as a good luck symbol and everything nice. Always make sure to add your individual touch to make it special for you or your loved ones.