101 Best Bodysuit Tattoo Ideas That Will Blow Your Mind! 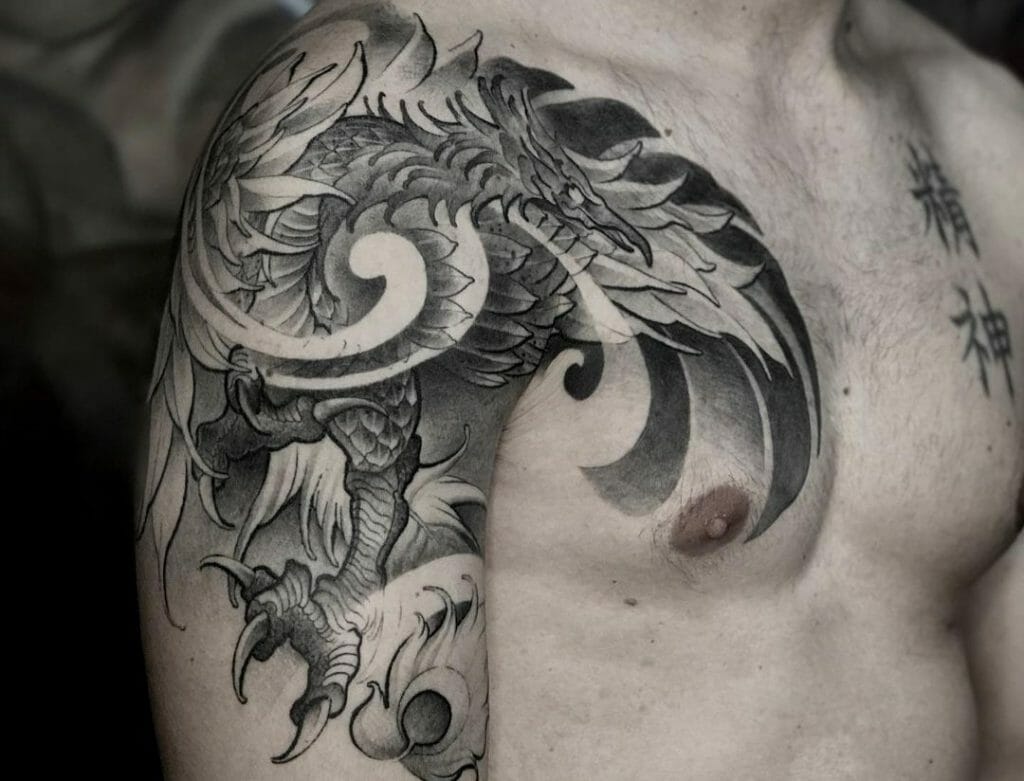 Bodysuit tattoos are a form of self-expression through elaborately detailed body art.

The idea of a bodysuit tattoo has originated from Irezumi in Japanese culture several hundred years ago in the Edo period. It has taken various forms over the years and has been adapted into a multitude of inking styles by various artists belonging to other foreign nations.

Bodysuit tattoos look similar to a piece of clothing that covers the entire body. The traditional body suit tattoos are inspired by the Japanese inking techniques with mythological creatures and demonic figures as the theme for these designs. In the Edo period in Japan, bodysuit tattoos emerged as a symbol of protection and were mostly tattooed by men in society. However, with the progression of time, bodysuit tattoo designs gained popularity among men and women alike. There are various categories of bodysuit tattoos depending upon the length or the part of the body that it aims to cover. A full-body suit is known as Soushinbori and is considered to be the pinnacle of Irezumi body art. Apart from that, you can also opt for a split chest or seven tenth sleeve bodysuit design portraying the subject of your choice.

You can opt for a Japanese bodysuit design that looks similar to a turtle shell or an abstract Hikae bodysuit that will only cover your shoulder and arms. Take a look at these creative bodysuit tattoo designs and pick one that touches your aesthetics!

Here is an ornamental bodysuit tattoo covering the entire back of the wearer. The central part of the design is a leaf life structure decorated with ornamental designs and horizontal lines. The design beautifully enhances the curvature around the hip of the wearer by aligning the designs with the natural curve of the body. You can incorporate colours instead of going for a monochromatic style to make this bodysuit tattoo look even more appealing.

A split chest tattoo is characterized by a break in the pattern along the middle of the design. The space in the centre is left blank and the adjacent areas are elaborately inked with intricate patterns. Here, is a beautiful split chest tattoo inspired by the Irezumi art form. Human faces are placed vertically along the length of the design with flowers and serpents. The black backdrop, which looks similar to a tortoise shell, highlights the entire tattoo with its contrasting patterns. This bodysuit tattoo, extending till the wrist, appears like the long sleeves of a shirt.

Here is an intriguing feminine bodysuit tattoo featuring an octopus with abstract geometric detailing. The octopus is inked on the torso of the wearer with realistic detailing. The rest of the design is filled with polyhedral geometric shapes in a combination of teal, grey, and black ink. This tattoo is heavily detailed around the region of the torso while it is kept comparatively simpler with subtle inkwork on the thighs. This can be a great tattoo idea for women who wish to ink a bodysuit tattoo with a hint of realism.

Samurai denotes a class of warriors who rose into prominence in the medieval era of Japan. They were a representation of bravery and has been immortalised through various form of art including tattoos. Here, a bodysuit tattoo of a samurai is inked on the skin of the wearer with vivid detailing. The sword in his hands has an intriguing pattern near the grip. He is adorning a traditional Japanese outfit with intricate floral motifs. The black clouds in the background are drawn in the Irezumi style that acts as the perfect canvas for the bodysuit.

A traditional bodysuit centring around an eagle tattoo design is beautifully tattooed on the body of the wearer. The avian features of the raptor are highlighted with intricate detailing and bold patterns. Its wings are inked in a darker hue with great precision. The patterns on the plumage of the eagle are drawn in a gradient of yellow and black. The raptor is roosting on a branch of a tree with its claws having a tight grip on the branch. Eagles carry a deep symbolic meaning associated with power and dominance. It is also considered to be the apostle of God and thus this eagle bodysuit tattoo will bring significance to your life apart from amping up your style quotient.

A dragon is one of the most popular subjects when it comes to Japanese bodysuit tattoo designs. However, this design doesn’t cover up the sleeves of the wearer like a piece of clothing which is commonly seen in other full bodysuits. The dragon tattoo is inked with vivid details using a combination of red and black ink with intricate shading on the patterned skin. The triangular bony structures on its skin are inked in a contrasting shade of yellow. The fangs are slightly visible inside its mouth and the pointed horns on either side of its head are inked with minimal details. According to mythology, a dragon symbolizes an optimistic force and strength.

The Hannya mask is beautifully inked in this tattoo art on the body of the wearer with realistic detailing. Its eyes are popping out of the socket and is inked in a shade of yellow. The curves on the face are highlighted in grey. The leering mouth of the demon is drawn in a vibrant shade of red with contrasting black teeth. The Hannya mask is a famous character in the Japanese Noh theatre representing a jealous demon. Moreover, the incorporation of the dragon on the arms enhances the phenomenal appearance of this bodysuit tattoo. The entire tattoo is inked on a black canvas that makes each of the designs look even more lively.

Here is a dynamic bodysuit tattoo art of Poseidon, the Greek god of water. The realistic representation of the Greek god is the focal point of attention in this design. The golden trident is highlighted with orange lightning sparks amidst the black clouds in the background. Poseidon is riding on the back of a shark in the sea. The curling waves in the sea are inked with vivid detailing in the Japanese inking style. If you want you can even fill up the arms and legs with impressions of fishes, horses and bulls that are associated with the Greek god.

The Chinese lions, also known as the guardian lions or foo dogs, are an architectural ornament representing strength and superiority. The Chinese lions are a sought after theme for various tattoo arts for their unique appearance combined with the meaningful symbolism. Here, the Chinese lion is drawn using intriguing patterns and shaded with utmost perfection. Its piercing eyes and gasping mouth is detailed in black ink. The trident symbol on the forehead of the lion brings an essence of spirituality. The sleeves of this tattoo design are tattooed with various designs along with floral detailing.

The bodysuit tattoo design bears the cultural heritage of the Edo period in Japan. These tattoos are widely popular in various foreign nations and are looked upon as a means of self-expression through comprehensive body art. Artists get to explore their creative genius through these elaborate styles of tattooing on the human canvas! Layering these designs with intriguing patterns and symbol enrich their meaning. Check out this curated list of suggestions of bodysuit tattoo designs in various inking styles.

What is a bodysuit tattoo?

A bodysuit tattoo is a large-scale body art covering that wraps around the full torso, or a majority of it. This type of tattoo often includes designs, symbols and images that come together to create an overall theme throughout the entire piece. It may include one large image or many smaller scenes combined into one grand design. Bodysuit tattoos are usually created over many sessions, as each area of the body must be precisely and carefully tattooed. This type of art is extremely detailed and typically covers most, if not all, of the arms, chest, stomach, back and legs. Bodysuit tattoos can take anywhere from hundreds of hours to complete depending on their size and complexity.

How much does a bodysuit tattoo cost?

The cost of a bodysuit tattoo varies depending on the size and complexity of the design. Generally, larger designs require more time to complete, which will usually result in higher costs. It is also important to factor in additional costs such as touch-ups due to fading or changes made over time. As a general estimate, a full bodysuit tattoo can cost anywhere from a few thousand dollars to tens of thousands of dollars. The total cost depends on the size, detail, number of elements and the artist’s experience in creating these types of works. It is important to consult with your chosen artist ahead of time to get an estimate before beginning a bodysuit tattoo.

How long does a bodysuit tattoo take to heal?

The healing process of a bodysuit tattoo can last anywhere from six weeks to several months, depending on the size and complexity of the design. This type of body art requires more aftercare than other tattoos due to its large coverage area. Keeping the entire area clean and moisturized is important for maintaining healthy skin as it heals, and avoiding activities like swimming, heavy lifting and prolonged exposure to the sun. Aftercare should include using a light antibiotic ointment for the first few days and then transitioning to a mild moisturizing lotion. It is recommended that you follow your artist’s aftercare instructions precisely for optimal healing results.

What are some of the most popular bodysuit tattoo designs?

Popular bodysuit tattoo designs range from traditional Japanese imagery and detailed abstract motifs to realism artwork and lettering styles. Many people choose to combine several themes into one design, such as incorporating religious symbolism with tribal elements or combining a black-and-gray portrait with vibrant shades of color. Some popular examples include large animal scenes, birds in flight, detailed floral patterns, intricate geometric shapes and even entire maps of cities or countries. Whatever your inspiration may be, a bodysuit tattoo can be tailored to you and your unique style.