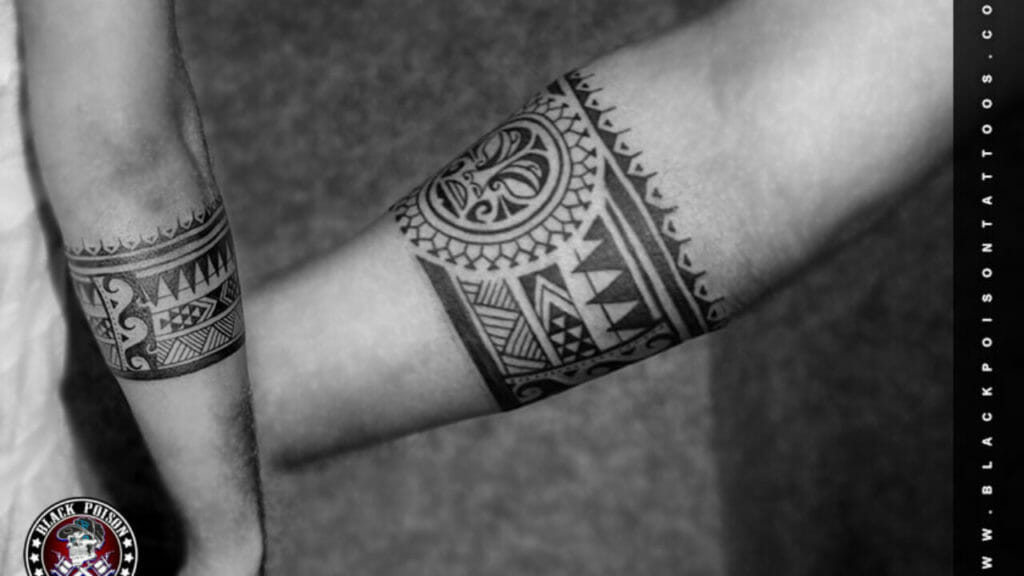 Black band tattoos have been popular for a couple of decades now.

Those who are looking for a fuss-free tattoo design that holds a lot of significance can opt for a black band tattoo. It is highly unlikely that this design will permanently ever go out of style, therefore many consider it to be a timeless tattoo.

Many cultures and ethnic communities such as the Maori community, the Polynesian community, and the Celtic community have supported armband tattoos and black band tattoos. For many, it commonly symbolizes death, the process of grieving or mourning, or honouring a deceased loved one. It additionally has other meanings as well, depending on the cultural background of the design. Solid black band tattoos are also known to represent the duality of life and death, strength, courage, inspiration, faith, peace, and the ability to overcome difficult circumstances. Owing to its relatively simple design, its easy to get a temporary arm tattoo instead of a permanent one. If you’re looking for tattoos with meaning, you’ve come to the right place!

There are multiple cultures over the world that have a long history of intricate body imagery and body art. A tribal armband is not just an ode to the heritage of the culture, and to one’s deceased ancestors, it is also a cultural marker for the individual. Tribal armband tattoos such as this one often include geometric shapes, culture specific symbols, lines, and intricate artwork. This is a great example for those who wish to get a Maori tattoo. Other associated tribal and historical designs also include Celtic armband designs, Polynesian armband designs, and Native American armband tattoos.

The colour black in many instances symbolizes death and loss. Therefore, many people who have had to go through the pain of losing a loved one decide to get a solid black armband tattoo in order to pay homage to the person who passed away. In many ways, it is a way to keep the memory of the person they loved alive, in the form of a personal tattoo. A solid black armband tattoo such as this one, with two lines circumventing the wrist, is relatively simple to tattoo. This is why, most tattoo artists can easily make this design. The bicep is also a popular area for black tattoos, albeit for different reasons. The solid black band can also represent courage and strength.

If you’re someone who doesn’t want a plain armband tattoo and instead want a novel design that is even more in style, then you should consider getting a geometric black band tattoo! Geometric tattoos are extremely artsy, and they can also be personalized according to your taste. These are so popular, that many people also opt to get an entire sleeve just out of these designs. Tattoos such as this one look really cool, since they incorporate various patterns and shapes onto the skin. For example, this tattoo includes triangles, circles, lines, and various bands.

Not a fan of a lot of ink? Minimalistic is the way to go for you. In the last couple of years, there has been a rising trend towards minimal tattoos that are meaningful in nature. Owing to the fact that many modern workplaces don’t support anyone wearing visible tattoos, including armband tattoos or even specifically black armband tattoos, many people decide to obtain small tattoos that are easier to conceal with makeup or clothing. Two simple lines, such as the ones in this tattoo are a great option for those who wish to look into simple tattoo designs that are meaningful and simplistic, and will permanently be in style.

Arrows often mark a specific direction or are a sign that one is heading towards a new route. Since there are multiple meanings behind black armbands, there is space to customize and personalize your tattoo to signify a personal journey. Transformation is a natural occurrence, as one grows older, one changes places, identities, and occupations. This can often mean the end of old habits, patterns, and ways of being; almost like the death of an old version of you. A black band tattoo such as this one, with arrows pointing forward, can be a way for you to showcase your growth. You can get this as a temporary or permanent tattoo.

Some dates or timestamps are etched in our minds forever, whether for good reasons or bad ones. People in mourning over a lost loved one often choose to get the date of their death or even their birthday tattooed onto their skin, to keep their memory alive. The roman numeral tattoo design is considered to be steeped in history, as it is centuries old. Other significant dates can be inscribed in black band tattoo designs. Just like this design, you can choose to get a black band above the roman numerals, and then have the roman numerals inscribed in a direct line below.

Large black armband tattoos are also great if you wish to hide any other permanent tattoos that you don’t like or regret. An armband tattoo doesn’t necessarily have to be extremely masculine or bold to be eyecatchy, meaningful, or attractive. Band tattoos come in more than one form or style. A great example of novel design, is this band tattoo with white and black flowers on top. The black background perfectly offsets the flowers and makes them appear full of life. Since flowers often represent birth, transformation, and growth, flower symbols on top of black bands could symbolize rebirth after death.

Bands that are created from brush strokes are also currently in style, such as the kind that this person has adorned. Often, many people choose to have signficant dates directly tattoed on their band, instead of on the top or bottom. This is also a popular choice, aside from roman numerals. Black bands are adorned on the arm by many who have had a loved one lose their life, since it almost makes them feel like they’re wearing or carrying a part of their loved one with themselves.

If you’re not a flower person, or want to look at designs that are slightly more androgenous, you should consider leaves or plants. Many leaves have a beautiful shape that only adds to the beauty of black band designs. Like in this tattoo, the green color of the leaf and its shape is beautifully contrasting the thick black band and gives it more character and adds various new meanings to the tattoo. A tattoo such as this one can be worn on the arm, the leg, or even specifically a bicep.