10 Best Birthmark Tattoo Ideas That Will Blow Your Mind! 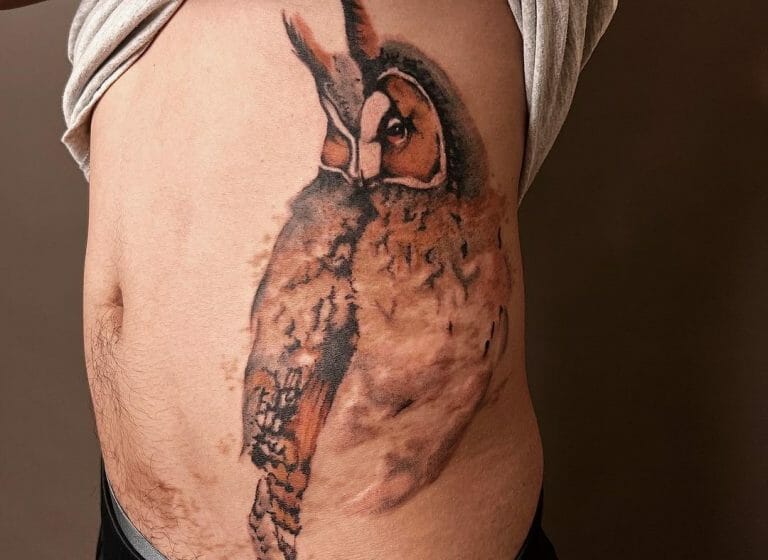 Wondering how you want to cover your birthmark? Check out our list of 10 awesome birthmark tattoo designs you can pick from!

Birthmark tattoo designs are made for the purpose of covering up a birthmark or incorporating the birthmark into your tattoos.

If you are interested in getting tattoos as cover-ups, make sure you check to see if that mole is not a sign of skin cancer.

Birthmarks are marks or moles that you are born with. Birthmarks should be checked before you opt for a tattoo as it could be cancer. You can check if your skin mark is cancerous, if the tattoo process is painful, if there is irritation, infection or if the needle makes the mole bleed. Sometimes the ink of the tattoo can irritate moles and can cause skin problems. Many tattoo artists prefer that you have your mole tested before you get a birthmark covered. If your birth mole turns brown at an early age, make sure that you get it tested for melanoma or skin disease. Common moles don’t turn brown. Some people don’t like to cover the entire birthmarks or moles but rather it is a supplement to the design that they want.

Check out our awesome list of birthmark tattoos to find the best one for you!

Birthmark Tattoo To Cover Up Discoloration

Some skin cells tend to make a red birthmark on the skin. It’s nice to incorporate the discolored appearance as part of the tattoo. The tattoo artist has not inked anything on the birthmark itself but has incorporated the birthmark into the tattoo. Tattoo artists don’t like to take the risk of putting ink on the birthmarks unless the person has consulted the necessary doctors for melanoma or other diseases. These types of tattoos normally take at least two sessions to complete and are not painful. This design looks like a pencil sketch of some mountains and a valley next to it. It is also a little tricky to create as the shading is already there. Some people liked to get the “spilt wine” design as it is a clever take on the red colour of the birthmark.

Birthmark Cover-up Design As A Smile

Sometimes pigment creating cells in the skin stop working and make a light skin patch. The blood vessels still work within the skin cells. A tattoo artist will still ask you to consult your doctors as this could be the early stages of melanoma forming. In this tattoo, a minimal smiling face is featured on the birthmark in black ink.

The healing process of these tattoos is not long, one month at most. The design looks wonderful on this birthmark because of the color variations. Always make sure when getting this tattoo that there is no excessive bleeding. The placement of this tattoo is on the arm and is a simple design which means it will not be as painful. You may also incorporate any surrounding moles into your tattoo design. Moles are formed when melanocytes stop producing melanin. Melanin is present in your body to provide the colour of your skin.

The shape of a birthmark can determine the design of the tattoo. Cover-ups don’t necessarily mean that the tattoo has to cover the birthmark, they can also surround the birthmark. In this tattoo is the outline of a little dog wearing a heart collar, with his name inscribed below. This not only covers the birthmark but also honours what is maybe something close to the client, a beloved pet. When getting cover-ups make sure that the tattoo doesn’t have worse reactions to the skin as they can be prone to it.

Traditional Eye With A Clock Design

This tattoo features an eye, an analog clock above it, and a huge rose below. The entire tattoo is inked in black and white and has a smooth texture. Sometimes having a discolouration on the skin as a birthmark can make a nice canvas for a tattoo. Your tattooist may ask you to get your patch tested by a doctor for melanoma before you get a tattoo done. It is important not to cover up moles as it may have adverse consequences and is considered to be dangerous.

Some marks in our body have a natural shading. This tattoo would be considered a birth mole cover-up, similar to freckles. The middle of the sunflower has been traced and the tattoo artist has made sure that there is no risk of any reaction. Flower tattoos represent hope and a purpose. Some moles may turn into something serious but that is not true for all cases that’s why you should be aware of the consequences of a cover-up tattoo. The shape of the tattoo is done with respect to the mark that is present. The sunflower is inked in detailed black lines with a slightly yellow centre. This person has placed the tattoo on their birthmark on the arm.

Sometimes having marks on your face can make you conscious and can affect your self-confidence. If the mark stays flat and has no reaction, you can get some ink on it. In this tattoo, while the birthmark was on the other side of the face, the tattoo complements it. The birthmark tattoo has hexagons of various shades of green covering the opposite side.

A rose symbolizes strength and that you have survived. This tattoo is inked on top of a birthmark on the back. The rose is inked in black and white with leaves on both sides. Some people prefer to have their birthmark covered so that it looks like a beautiful work of art. This tattoo has been done in the neo-traditional style of tattooing. To cover up your moles, cute designs can be used.

Covering Up Birthmarks With A Dragon Tattoo

Sometimes you may have a cluster of birthmarks that you would like to cover. In the current design, the client seems to have a cluster of birthmarks on his arm. This type of tattoo typically takes three or four sessions to complete. In a neo-traditional style of tattooing, this tattoo features a grey dragon along the length of the forearm and some tattoo freckles around it. The placement of the design is on the forearm and is spread out like a sleeve tattoo. The moles have been made to form a dragon.

A forearm tattoo takes more than one session to complete. This design is covering a big birthmark, which is also the source of the flower’s colour. This tattoo features branch with a few flowers, some fully blossomed and a few buds, along with leaves. This tattoo has been made in the non-traditional style in a simple black outline with minimal shading. Flower tattoo designs represent growth and a change in your life. It is important to have your birthmark tested before you get a tattoo as it could be an infection or cancerous. Your tattooist will also be hesitant to put ink on your birthmark if you don’t have it tested by doctors.

This tattoo is filled with cute little characters and elements, with the birthmark on the forearm acting as a background. There’s an astronaut, a rocket, a constellation, an atom and stars in the background. If you have a birthmark or a cluster of birthmarks that you don’t want to cover, but rather you want it to highlight the tattoo that you are getting, you can have a design that compliments the birthmarks. In this design, the birthmark is like a background color for the tattoo. This type of design only takes one session and is not painful as it is on the muscle rather than the bone. It is the best way to incorporate the mole if you have one and not tattoo over it as it can cause a reaction from the ink.

Birthmark tattoos or birthmark cover-up tattoos are a way to express beauty and to treat your body as a canvas. If you have light skin pigmentation, moles or some red birthmarks, it’s up to you how you want to cover them or incorporate them into your tattoo. Remember to get the tattoo checked for cancer, melanoma or any other disease you may suspect before you get a tattoo. Check out our suggestions for some coverup or birthmark tattoos