10 Best Aztec Band Tattoo Ideas That Will Blow Your Mind! 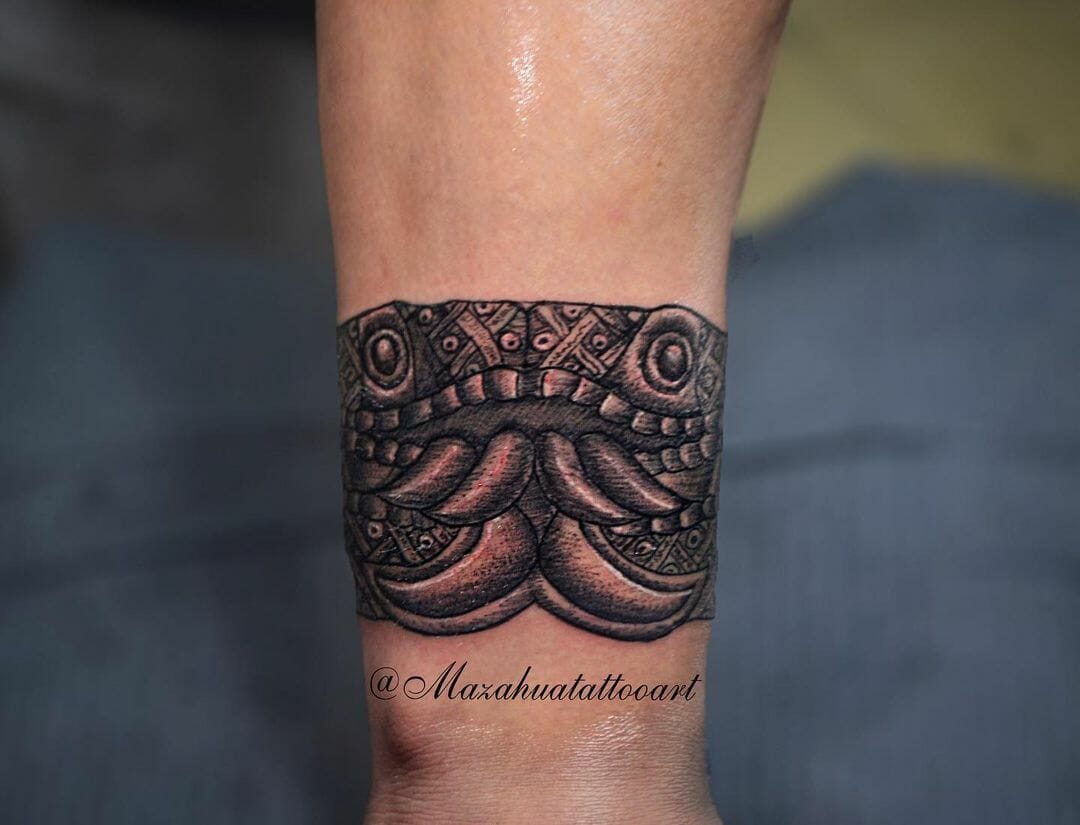 Aztec tattoos are increasingly showing an upsurge in the neo-traditional sphere of tattooing with tattoo enthusiasts demanding a rich and cultural mark on their skin.

An Aztec tattoo refers to one’s affinity towards the native American culture of the Aztec civilization. Aztec tattoo wearers are presumably of the same lineage, well-informed about the cultural and mythical significance of the Aztec symbols, while proudly flaunting their cultural heritage.

Different cultures had adopted tattooing for various reasons. Like the Polynesians, Aztec people also paid homage to their ancestors with their unique set of tribal tattoos. Contributing members of the Aztec empire, for instance, the Aztec warriors, shamans, and many others would carry Aztec symbolism on their bodies. Even today, the surviving Aztec people mark their bodies in the memory of their origin and as a sense of unity. However, most Aztec tattoos include large-scale designs portraying the Aztec culture, for example, a torso of an Aztec warrior, an Aztec eagle, the Aztec calendar, and so on, and in order to simplify the process, comes into picture armband tattoos. An armband tattoo is a cool addition when you want to invest a lesser surface area for tattooing. Armbands are as awesome as they can get, and with these popular designs and patterns from ancient Mexico and Central America, they have become a go-to for the lovers of body art. Read on to find how you can compress the authentic essence of the Aztec tattoo designs in armband tattoos and create an amalgamation of tradition and contemporary.

The Aztec culture highly regarded their deities, so it is no surprise that they make an appearance in their tattoos. This armband shows the Aztec god of death, usually portrayed with a skull-face as a symbolic mark. The god of death, Mictlantecuhtli, is said to rule over the realm of death along with his wife and deal with the unfortunate souls who wandered around owing to their cause of death. This armband features the skull of the deity alongside zig-zag patterns. Black and grey further compliments the theme of death and produce a bold tattoo suitable for men with menacing persona.

Similarly, this tattoo design puts forth Coatlicue, the goddess of Earth. The goddess is characterized by her dual-serpent face, a full-length skirt laced with serpents, and her neck embellished with remainders of corpses. Such a ghastly figure of nurturer in Aztec mythology is surely curious but justifies all logic. She is both fertile and an absorber of death and decay. This intricately designed armband features her face and alludes to the myth.

If you are not into such broad armbands, a mesh of geometric patterns in black ink could also work just fine. The criss-cross pattern encircling the forearm is an amazing tattoo design to highlight your forearms in style.

The sacred Aztec calendar featuring the sun god in its center was considered one of the most significant Mesoamerican calendars to lay down the basic framework of 365 days. The sun god is the supreme deity of the Aztec culture and is placed amidst the intricate designs as a mark of fertility. The tattoo artist here draws the structure of the Aztec calendar without going all-in with its various divisions. This great tattoo design that will suit all skin tones is a divine allusion that will portray your affinity towards the culture.

Utilise abstract lines instead of geometric shapes for an Aztec band tattoo that fits right on your ankles. Here the touch of brown to the general black imparts an earthy touch to the tribal tattoo. The small lines seem to radiate one’s inner strength, simultaneously making a striking piece of body art. You can also play around with white ink, thus adding an offbeat touch of the contemporary to the traditional.

The Aztec people put their animals on a high pedestal, thereby their prominence in Aztec tattoos. Here, the artist uses a hummingbird, the meaning of which is quite intriguing for the Aztecs. Like all birds, hummingbirds represent freedom and light-heartedness, while they were also linked with a romantic inclination by the ancient inhabitants of Mexico. This Aztec tattoo band resembles a bracelet where the bird occupies the focal point and the surroundings tie the design together. The intricately designed hummingbird could be a perfect symbol if you possess a special bias for the creature.

Rarely are two animals morphed together in a band tattoo design, but when they are, the piece of art is definitely jaw-dropping! The Aztec eagle tattoo is one of the most worn Aztec symbols inked by the warrior class and stands as a symbol of strength, courage, and wisdom. When this feisty eagle is merged with a jaguar, the meanings of the two connote a lethal implication in this band tattoo, sure to get you loads of compliments.

Queqzalcoatl, the name given to the Aztec feathered serpent, is regarded as the god of vegetation, wind, art and craft, and the planet Venus. Though the deity may have different meanings within the Aztec culture itself, it is no doubt to make a statement armband tattoo! The artist here draws a neat representation of the serpent with plain black outlines and block designs in order to beautify the piece.

Akin to the previous Aztec tattoo serpent, the design wraps around the arm of the wearer right below the elbow. Except, this one comes alive with its 3D illusion achieved by minute shading techniques. The portrayal is kept as real as it is often depicted in myths and artifacts with the use of dark shades, complementing the role of the deity.

Symbolically rich a piece, this Aztec body art again returns back to the sun deity in its center with a serpent on its left and a bird on the right. The sun would determine the wearer’s supremacy, the serpent testifying his productive self, and the bird highlighting on his free-spiritedness. We suggest you conduct background research on the Aztec symbols before you go in to assemble such a bold design.

Carrying a tinge of delicacy in its patterning, this Aztec tattoo is fit for a woman with a love for the culture. The geometric arches and dots add an essence of feminine beauty to the overall tattoo. The symmetry is in line with the Aztec tattoo designs that characteristically mark them so differently. Hike up such a design as an arm tattoo and watch the world envy your style! You can also experiment with colours in case you fancy a splash of bright hues.

If you want to cover your wrists but are clueless about where to start, this tattoo will surely clear the fog. This plain chain of loops is referred to as Xicalcoliuhqui, an uncanny resemblance to the Greek key that you may have seen everywhere. This spiral pattern is believed to mean a mark of continuity, a representative form of clouds, waves, water, and sometimes as a mark of protection from death. Given these connotations associated with the almost banal symbol, it makes a perfect motif for armband tattoos. The wrist being one of the best exposed parts of the body will accommodate this rich piece of art with grace no matter the skin tones.

For all those lovers of body art who are drawn towards small tattoos, this Aztec band will keep your fancy in check and at the same time make a colour palette off of your arm. Colour is usually avoided when it comes to traditional tattoos, keeping the designs as original as possible. However, neo-traditional tattoos have ushered in a lot of experimentation, and colours are on top of that list. The thinly drawn lines and geometric shapes when swatched with colour will definitely draw attention to your body.

This blue bracelet-like band tattoo is a great example to refer to if you want to go all-in with colours. The many shades of blue highlighted with silver produce an eye-catching piece. Place this tattoo on your arm or leg to truly represent the Aztec culture in the present times.

Aztec armbands are definitely a hit in 2021 with the rising popularity of the culture. Nowadays people outside of the Aztec lineage are also getting tattooed in the Mesoamerican way in order to showcase their affinity. Now that you know all about the meaning of the Aztec band tattoo, choose your pick from the many symbols and flaunt your taste in body art. But if you are still clueless about where to start, here are some more Aztec tattoo ideas that you can draw inspiration from: