10 Best Aztec Forearm Tattoo Ideas That Will Blow Your Mind! 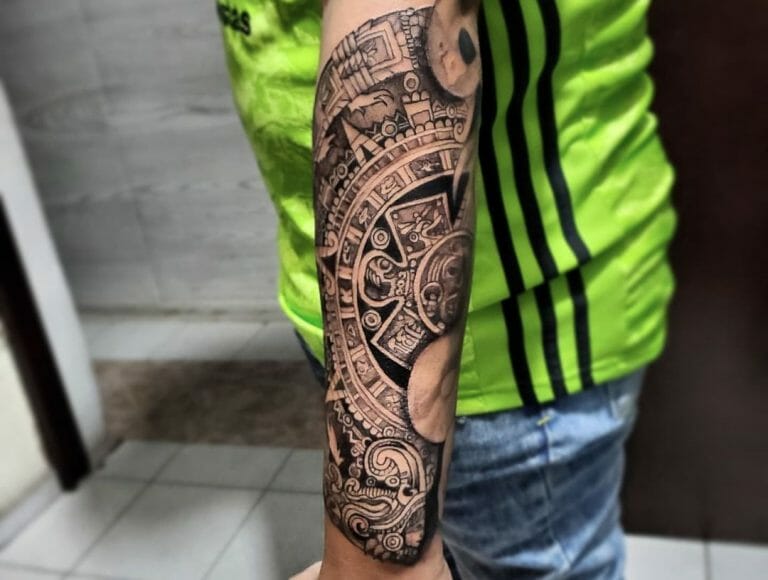 Want to take a dip in history and show your love for the Aztecs? These Aztec forearm tattoos curated specially for you are bound to do the magic.

Aztecs are one of the ancient civilisations hailing from Aztlan, covering the areas of Central America and Mexico in today’s world.

The Aztec empire is almost extinct due to invasion, however, the legends still live between us through tattoos, keeping the ancient history alive. According to Aztec mythology, body art was deeply encouraged to distinguish warriors from men.

Aztec believed that men with tattoos were important and respected by all. Aztec people used tattoos to distinguish them from one Aztec tribe to another, their accomplishments were also a part of their body art, as well as their tattoos was also a way to pay respect to different Aztec Gods. Aztec tattoos are typically associated with their rich culture and mythology. Aztec tattoos are very detailed oriented neat designs attached with their own Aztec patterns which have a similar style to themselves. Due to these details and patterns, when you look at an Aztec tattoo, the difference can easily be distinguished from other tattoos prominently. We have listed some of the best Aztec tattoo ideas just for you.

Aztecs were among the most head-strong tribes found in history. Aztec warriors were known as one of the best soldiers on the surface of the earth during their era. This piece of art of an Aztec chief was given life by this talented tattoo artist. Along with these intricate designs, which are an absolute charm, to this tattoo overall. You can also notice that the artist wrote “Mexica” at the end of the tattoo, representing the origin of the Aztecs. The headdress has the traditional design of the Aztec culture. The artist had a shade grading on the face of the warrior to make it a more detailed and realistic look. Men wearing jewellery was very common in ancient days, and similarly, you can also notice that in this tattoo the warrior typically wears jewellery to represent its social status in the society. This tattoo perfectly captures the emotions of an Aztec warrior, and this tattoo will look absolutely fierce on your forearm.

In this tattoo, the tattoo artist beautifully portrayed Mayan art in the design of TONATIUH, the Sun God. Aztec tattoos, also known as Mayan tattoos, are considered to be sacred because Aztecs usually inked to themselves to pay respect to different gods of their culture. This tattoo is a typical traditional tattoo of the original Sun God. You can also notice the different kinds of symbols drawn by the sides of this tattoo and each of these is associated with authentic Aztec symbolism. There are different shade grading found in this tattoo, and this makes the tattoo stand out in front of the eyes and look intimidating. So, if you are someone people get easily intimidated by then this Aztec sun God Forearm tattoo will be an ideal match for your personality.

Aztec art is deeply personal and authentic, and Aztec cultures have different symbols to represent different stories of the culture. This tattoo is beautifully done by the artist. We can notice how the Aztec art form is flawlessly portrayed in this tattoo. This tattoo is an ideal way to pay your respect for the Aztec people who are no more with us but are still alive through art. This tattoo typically consists of a skull wearing the Aztec headdress. If you notice closely you’d see that the skull is not a usual one, the artist made a smiling skull to add texture to this tattoo. However, the headdress worn by the skull is also made of another animal skull to match with it. The shading of the tattoo also gives it a 3D outlook and seems very presentable to one’s eyes.

Aztec society was fearless and so were their representation of tattoos. This tattoo features the traditional and original art form of the Aztecs. This authentic Aztec eagle tattoo should definitely be on your list because of the style of the art, which represents the ancient Mayan culture. You can notice in this tattoo, the eagle has a different grade of shading done to each of its parts. The artist gave detailing to this piece of tattoo only by shading. You can also notice the style the artist follows is typical of Aztec tribal art. To give it a more statue-like outlook, the artist also creatively added cracks on the middle of the eagle. You can also notice that there is a major use of different shaped rectangular boxes which makes the Aztec style tattoos are very pleasing to look at. This is a typical Aztec design and this should definitely be your next tattoo if you want a tattoo with a rich history.

This tattoo features two species of animals which are portrayed in the form of Aztec art. The Xoloitzcuintle is placed in the middle of two Axolotls. All three characters are ideally inked in the original style of the Aztecs. There is a prominent symbol at the end of the tattoo which merges with the whole tattoo completely being a part of it. The Xoloitzcuintle also has the Aztec symbol on its head. The shading on the face of the Xoloitzcuintle is also very prominent and gives out a detailed form of art. If you notice, you’d see that the Axolotls are also drawn in the Mayan style. The shading of this tattoo gives it a sketch-like structure and the true motive of the artist comes out with it too. It has prominent Aztec symbols attached to it. This is the perfect mixture of modern times with ancient times and it is a great tattoo that will look amazing on your forearm.

If you don’t want something massive on your forearm and you love minimalistic art, then this tattoo is the perfect one for you. This cute Tlaloc tattoo is not only minimal but also rich in history and culture. This tattoo has added sparks to it and the artist too made sure to add the sparks literally to the sides of this tattoo. This tattoo consists of just the smiling face of the Aztec figure in the form of stonework. The shading of this tattoo is also very unique and gives it a 3D figure. The tattoo is not very complicated and consists of very structured geometrical patterns. These are among the very rare tattoo designs that you can get.

Aztec tribal tattoos are usually had black and white but with changing times and experimentation, this colourful tattoo also does justice to their culture. In this tattoo, the vibrant colours definitely stand out and make it unique. There is one eye at the centre drawn in the typical Aztec style along with its symbol. There is a use of 10-11 different colours that makes this tattoo come to life. The eye in the middle also adds an Illuminati vibe to it. The shading done with the different colours in this tattoo is definitely noteworthy and the Aztec tribal forearm tattoo pattern is very elegant to look at. This tattoo will be a great idea for you to get.

The Quetzalcoatl or the feathered serpent was a deity of the Aztec culture and an Aztec symbolism for the creation of mankind. In this tattoo, the artist magnificently portrays the special deity in an extraordinary way. The colours used in this tattoo for the detailing it are mainly green, red and white ink, along with the usual black ink. Most tattoo artists use multicolours to highlight and add details to a particular tattoo. The artist subtly uses green shading along with black on the feathers of the serpent and red is used in the eyes to give it a fierce outlook. Apart from that, you can also notice the traditional jewellery is also worn by this deity and it’s been highlighted by multicolours too. Aztec forearm tattoo designs are among the most unique sets of tattoo designs one can probably get.

This tattoo is one of the most emotionally detailed tattoos. It consists of two parts, the Aztec woman and a skull. The artist impeccably merged the two parts of the tattoos. We can see that in this tattoo the woman is wearing the traditional headdress, which was worn by the people of the Aztec tribe. The tears in her eyes are beautifully denoted by shading and bring out the real emotion. Aztec people also painted their faces, and here, the tattoo artist uses red ink to mark that too. The jewellery is also detailed with red ink, to denoted that it was valuable. the shoulder of the woman merges with the skull portraying the death of a culture and the loss of it. Through this tattoo, the grievance is shown perfectly and you should definitely consider having this tattoo on your forearm.

This tattoo has a lot of important symbols of the Aztec tribe. The first half of the tattoo represents the calendar and the second part is a fierce deity. If you’re planning on getting this tattoo then you should definitely get it done by a well professional tattoo artist because this delicate piece of art has small details and numerous shadings added to it and gives out the authentic flavours of the Aztecs. These kinds of tribal designs were very common among the tribe and this tattoo adds authenticity to it. It’s a simple blank and white ink tattoo, but the collaboration of these two Aztec symbols brings out the best of it. This Mayan tattoo will definitely look gorgeous on your forearm. This Aztec tattoo design will be perfect if you’re still confused with a design.

If you love to explore the past and pay tribute to one of the ancient civilisations of the world, then these Aztec tattoos will be your ideal match. These tattoos are not only authentic but also gives a very intimidating perspective to the one that carries them. Getting a tattoo on your forearm is the best place to get your first tattoo because it is among one of the common placements a beginner can start with. However, you can also try out many different Aztec tattoos styles and experiment with them, listed below are some more tattoo design ideas you can try out too.