101 Best 90’s Baby Tattoo Ideas That Will Blow Your Mind! 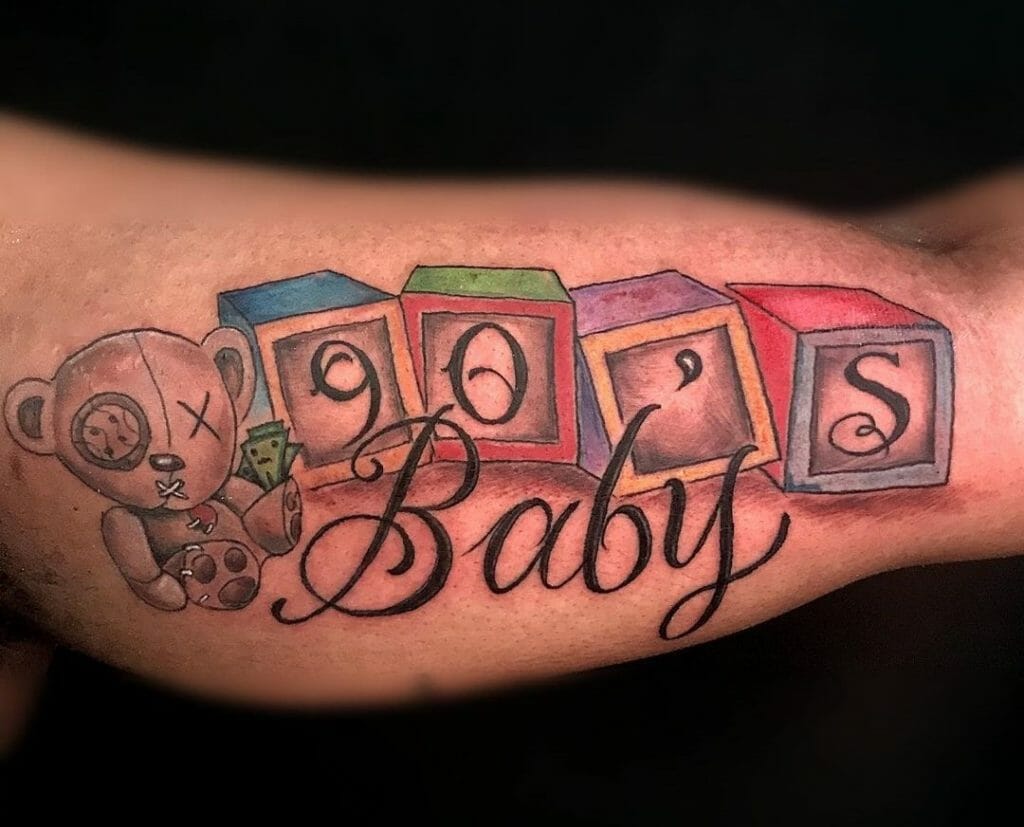 Interested in some 90s pop culture? These curated 90s baby tattoos are bound to remind you of the golden era of pop culture.

The 90s have widely been regarded as the golden era of pop culture.

Ranging from the period from 1990-2000, the 90s gave people a diverse range of TV shows, music, movies and entertainment that acquired cult following in years to come. With the ensuing dot com boom, the 90s become a hotbed for tattoo ideas that people could look up to.

The 90s tattoos primarily consist of a diverse range of pop culture tattoos available for ages. For instance, if you are a music lover, you could check out tattoos involving Nirvana, Green Day, Spice Girls and the like. If tattoos from movies and TV shows are more to your liking, you could check out tattoos involving Friends, Seinfield or even Pulp fiction. However, if the 90s are quintessentially known for something, it is for cartoons. The era produced some of the best cartoon shows including the iconic Batman animated series. The ever surging 90s baby tattoo can thus be attributed to a mix of an overwhelming sense of nostalgia coupled with the cult following the aspects of pop culture have gained.

A simple portrait of Derek and Odette from The Swan Princess on your arm might strike as a unique piece for the 90s baby tattoo design. It is bound to be reminiscent of the ‘butterflies in your stomach’ feels you had, when you met the one. Add to that the Disney princess feels, and you have a stellar tattoo on your hand. The tattoo is carefully inked inside a heart and comprises the lovely couple sharing a kiss. The background is a luminous hue of diverse colours specifically aimed to bring forth a contrast as well as give an illusion of that magical feeling, making this one of the 90’s baby best tattoo.

Mona the Vampire was a television show aired in the early 90s showcasing the life of a teenager who belongs to a family of vampires. It was the first cartoon spooky book series which was broadcast later as a show. If you are fond of ghosts, goblins and anything similar to scary this 90s baby tattoo is a great choice you can try. The quirky way of how the main character is portrayed in the tattoo gives it a kick between sane and insane. Many of us grew up watching cartoons and reading comic books, so getting a tattoo about it is a thing to cherish forever.

This simple tattoo declares your love for the 90s baby tattoo. It looks classy, well detailed and tells everybody where your loyalties lie. The subtle childish design of the tattoo involves building blocks coupled with a wide range of symbols like the dollar symbol (Richie Rich anyone?) to put forth a tattoo that is effortlessly customisable as per requirement, while not being too design heavy. This particular design can be a 90’s baby bicep tattoo, considering the area it would require to form the design.

The Gargoyles were one of the most upbeat and progressive 90s shows we had. It was one of the first Disney series to have adapted the Shakespearean undertone. This colourful tattoo of Goliath from the series is one of the best 90s baby tattoo out there. The simple straightforward design coupled with bright colours is a treat that’s hard to beat. The Goliath tattoo show personalized or generic feelings towards the 90s era. From being a protector in the 90s to cool as the Gen-Z’s claim themselves to be. A perfect hit of nostalgia and shadow all in one 90’s baby tattoo design.

Another exquisite bicep tattoo idea, but first how many of you remember the legendary Simpsons and Pokémon ? 90s tattoos designs can be taken from anywhere irrespective of the genre. This cute tattoo is quite representative of that very ethos. A clever appropriation of both the Simpsons’ and the Pokemon universe, this tattoo mixes characters and poses to create a tattoo that is borderline surreal. The tattoo has the markings of a Magikarp, along with the wings of a Butterfree, posing in the quintessential Simpsons’style.

The popular show Pokemon has quite frankly revolutionised the cartoon industry. This tattoo consists of four of the original pokemon introduced on the show. The tattoo consists of Squirtle, Charmander, Bulbasaur and Pikachu all resplendent with their complete colours. The elements each of these pokemon belong to is also neatly represented. The highlight of the tattoo however has to be the black shades on the background which bring forth the individual elements of the tattoos into sharp focus.

As far as 90s baby tattoo ideas go, it cannot get better than Courage the Cowardly Dog. This beloved character was by far one of the most popular cartoons on TV, and it would be quite difficult to find someone not familiar with this character. This innovative tattoo consists of a front profile of Courage with a backdrop of his farm. The greenish hue that the background has, adds to the scary nature of the tattoo. In fact, the most clever part of the tattoo would be the cleverly positioned torch, which while representative of the investigative abilities of the show, also lends a 3D touch to the tattoo.

As far as 90s tattoo ideas are concerned, it does not get any better than our favourite Scooby Doo. The easily scared but eminently lovable character from the popular show can be a great choice for a tattoo. This Scooby Doo tattoo is extremely dynamic in nature and shows the beloved Great Dane in all his glorified quirkiness. Apart from Scooby, the tattoo also contains the Mystery Machine, which is the car featured on the show. This colourful tattoo is at once effortlessly cute and an extremely popular choice for a tattoo.

It would be extremely difficult to miss the masked crusader of Gotham when discussing 90s tattoos. Batman has been a significant part of 90s pop culture owing his renewed resurgence in popularity to the now cult animated series. This imposing tattoo of Batman is a simple yet effective representation of the dark knight. The colours of the tattoo are kept true to their comic counterpart to ensure that the tattoo remains true to its source material. The added “huh” is a nice little throwback to the representation of batman as in the comics. Given that the tattoo is of a slighter larger size, it might be a good idea to get this tattoo on your forearm.

It would be impractical to not consider getting a Powerpuff girls tattoo if you are considering 90s baby tattoos. The fantastic TV show had everyone rooting for their favourite trio as they took on a host of threats to protect their city. This extremely detailed tattoo consists of the faces of Blossom, Bubbles and Buttercup on a cone topped off with a cherry for good measure. The tattoo checks all the right boxes when it comes to colour, design, and sheer cuteness.

Given the sheer number of great tattoo ideas 90s tattoos have, you could also check out these few other tattoo designs:

What do 90’s baby tattoos mean?

90’s baby tattoos often represent a special time in someone’s life, when they were part of the generation that grew up with the rise of technology, alternative music scenes and new trends. They may also be used to commemorate a particular moment or event from their childhood or adolescence. From cartoon characters to symbols of independence, 90s babies often choose tattoos that reflect their nostalgia for the past. Popular designs include references to television shows, video games, and music artists from the era as well as symbols of friendship and loyalty. Tattoos can also be used to honor a person’s hometown or upbringing, represent an important milestone in life, or serve as a reminder of a particular cause close to their heart. Ultimately, a 90s baby tattoo is very personal and should be chosen based on what the wearer wants to express about their life.

What is the symbolism behind 90’s baby tattoos?

90’s baby tattoos often symbolize nostalgia, optimism and freedom. They are used to celebrate the unique experiences of growing up during a time when technology was rapidly advancing and new trends were emerging. A 90s baby tattoo may also be chosen for its specific meaning, such as friendship, loyalty or independence. Some may choose symbols that remind them of their hometown or the special moments they experienced in their life. Additionally, 90s baby tattoos may be chosen to honor a cause that was important to them during this time. Ultimately, the symbolism behind these tattoos is deeply personal and should reflect what each individual wants to express about themselves and their life experiences.

What are some popular 90’s baby tattoos?

Popular 90s baby tattoos include cartoon characters from the era, symbols of friendship, music and video game references, as well as representations of independence. Tattoos featuring popular characters such as Spongebob Squarepants, Bart Simpson or The Powerpuff Girls are particularly common among those born in this decade. Other popular designs include symbols such as peace signs, stars and hearts. Music references often include iconic bands from the time period, such as The Spice Girls or Nirvana. Video game tattoos may feature characters from popular titles like Super Mario World or Street Fighter II. Additionally, there are many symbols that represent a particular cause that was important to people in the 90s such as feminism, LGBTQ rights and environmental awareness. Ultimately, the tattoo chosen should be something that represents a special moment or memory in the wearer’s life.