10 Best Courage the Cowardly Dog Tattoo Ideas You’ll Have to See to Believe! 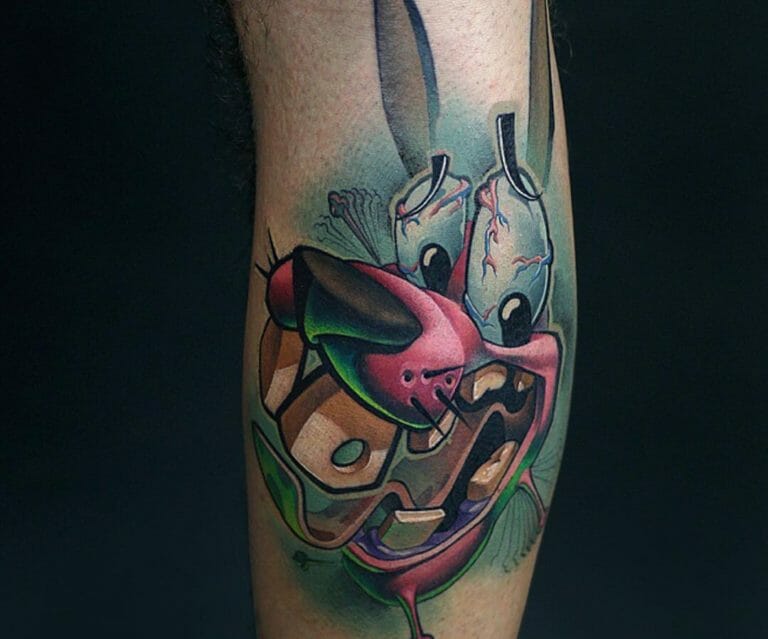 Are you a fan of Courage the Cowardly Dog and want to get the character tattooed on your body? Here are some interesting tattoo ideas to consider!

Courage the Cowardly Dog is an American animated TV series featuring elements of horror and comedy.

This very popular Television series was developed by John R. Dilworth for Cartoon Network. The main character of this animated series is Courage who is a talking dog living with an old couple in their farmhouse, the location of which is middle of “Nowhere”.

Courage is a cowardly dog who is very kind yet easy to scare. His parents abandoned him when he was a little puppy just after which Muriel found Courage and brought him home.

Courage then starts living with his owners Muriel and her husband Eustace and they frequently confront zombies, aliens, vampires, monsters, mad scientists, demons and other paranormal entities. Getting your favourite cartoon tattoo can say a lot about your interests but choosing the ideal one out of numerous cartoons tattoo designs can be quite puzzling.

This medium-sized tattoo can be done anywhere on the forearm or near the ankle.

Courage The Things I Do For Love Tattoo

For those who are looking for a unique Cowardly dog tattoo, this is one of the best. It is the perfect combination of the cowardly dog along with the quote ‘Things I do for love’ written around the character. The character is drawn on a neatly outlined heart which is coloured in cool blue. Ideally, this Courage the Cowardly Dog tattoo shouldn’t be too small but the prominent colours make it worth it.

This tattoo can be great for people who wants to go for monochromatic tattoos. It can be regarded as one of the best tattoo designs for men who want a dog tattoo as it is minimalist and relevant yet the same time. With the bold black outline, this tattoo is best suited for the neck, wrist, ankle and collarbone.

For those who want an eccentric cowardly dog tattoo, this tattoo can be a perfect choice. This tattoo is a very cute depiction of Courage in an eggplant costume with a green top and purple body. The tattoo shows courage peeping out of the eggplant with a long snout. The best place to get this tattoo created is near the ankle or forearm.

This tattoo is a mix-match of red and black colour. Red is the colour of love and courage at the same time and the tattoo has more red to show than the rest of the colours. This tattoo is a perfect depiction of courage, love and fear all together. The tattoo shows three different sized hearts which symbolize love. The crocodile of course is something tha Courage is afraid of.

This tattoo showcases Courage the Cowardly Dog in a heart-shaped frame. The frame is beautifully drawn and coloured in yellow with hints of red all around the frame. At one side of the tattoo, a floral design is created, bright with colours. The tattoo is overall a game of colours featuring blue, pink, yellow, green and red. The cute splash of colours makes it look really vibrant.

This is a famous tattoo of Courage with the eyes popping out and tongue jutting out in fear of some terrible site. This is almost a statement piece of the Courage the Cowardly Dog show and it is a great one to go for if you want to keep the memory of the cartoon etched on your skin. This tattoo can be ideally drawn near the neck, collarbone, finger, wrist, ankle, and behind the ear.

If you are more into horror, this tattoo will surely grab your attention with its precise detailing. This dog tattoo idea shows Courage the Cowardly dog in its feared, screaming out loud. The mouth of Courage the Cowardly Dog carries the precise detailed of the funny rotten teeth, the large tongue and every bit of detail that makes Courage a fan-favourite. The basic shape of this tattoo is circular which makes it perfect for the upper arm and above the ankle.