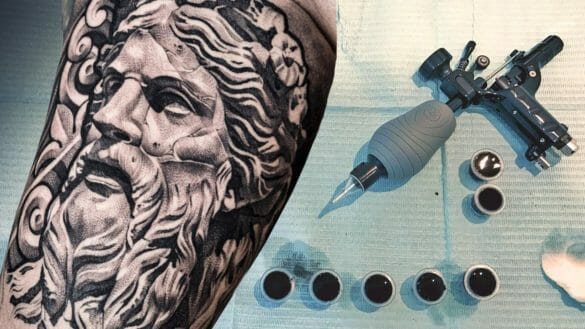 Greek mythology tattoos are super popular worldwide amongst men and women. Greek gods tattoo designs are filled with masculinity, power, and they stand for strength and wisdom. You will find 16 amazing, embracing, as well as original Greek tattoos in the text below, see for yourself!

What Does A Zeus Tattoo Mean?

A Zeus tattoo meaning is pretty common and talked about in Greek mythology. Many would agree that Zeus stands for and represents a great force, power, and he is the God of the sky, thunder as well as lightning. He is also one of the most common go-to tattoos.

If you love Greek culture and Athena – you will love this type of tattoo. Choose similar black and white designs, and place them on your leg. This mythical tattoo will take around 4 hours of your time, and it will definitely suit guys who like larger tattoo designs.

Are you a fan of Greek tattoos and their meanings? If so, a Medusa may be an appealing tattoo for you to get. Medusa was a monster – a human who lived with venomous snakes that she placed in her hair. Anyone who would gaze upon her would be turned into a stone. Do you like this explanation? If so, stick with similar designs over your leg or your arm.

This amazing Atlas Greek god tattoo is for men who like manly tattoo ideas. Atlas is a Greek god, and he has an amazing meaning behind his name. His image is a symbol of power, and he stands for endurance while holding an entire globe over his back! This is why placing this tattoo on your back or shoulders is the best idea.

Greek gods and goddesses can look amazing even once tattooed altogether! You should also add some Roman numbers, and stick with Greek symbols to make the tattoo even more realistic looking.

Greek God tattoo sleeve is an amazing option for men who are not afraid of bigger tattoos, or who like manly designs. This Achilles tattoo will look amazing in plain black ink and will look good even once it starts to fade. If you can spare 5+ hours and you want to get inked the right way – this is your sleeve tattoo.

Unfortunately, side tattoos do hurt. However, similar images are for people who like Greeks, and who don’t mind the pain. If you want a bigger and attention-seeking tattoo, you will love this Medusa in black ink.

Who is your favorite Greek god? Some men like Ares tattoo designs, while others are a fan of Achilles or Apollo! However, this Poseidon god tattoo is for men who loved the god of sea, earthquakes, as well as water in general. This illustration will look great once paired up with a significant word, and you will have amazing stories to tell others around you if you stick with this tattoo, it is an amazing conversation starter!

This Greek goddess tattoo is for men who like powerful and feminine tattoos. Not all the Athena tattoo designs or Greek mythology tattoos need to look masculine, giant, or bold. Instead, they can look simple, and well-detailed (such as this one).

Place a Medusa Greek tattoo across your leg or your thigh. The size can vary, but the placement won’t hurt a lot and is perfect for men who are on a search for the most common go-to Greek symbol.

11. Greek Warriors Tattoos On Back

Sleeve tattoos, as well as back tattoos, are for true fans of Greek mythology. You can also combine this back tattoo with a lion design, or some other symbol tattoos that you can relate to the most, and with ease. Mythological and mysterious creatures will look great over your entire back.

Aphrodite was an ancient Greek goddess of sex, love, and beauty. If you live and go through life by this moto – why not place similar tattoos over your body? Stick with a smaller illustration, and don’t forget to make her arms stand out in the picture!

Fighting or tribal tattoos are for guys who like old-school tattoos. You could also go for some colors to make this tattoo stand out some more. Black and red ink usually look the best together and will suit men who need a bullet-proof tattoo solution. Shoulder tattoos won’t hurt a lot, but be careful regarding your chest – these can be painful.

This Greek mythology tattoo will look amazing over your entire chest. You can go for three of your favorite gods – Achilles, Medusa, Apollo, Aphrodite – you name it! Stick with these three and enjoy this meaning, as well as a true representation of power.

Forearm tattoos will look great and they don’t hurt a lot. Stick to Greek mythology tattoos small designs if you are out of space, or if you want to get the process over in less than two hours! Greek tattoos are the best once done in plain black color, as well as with some interesting symbol tattoos.

Lastly, colorful tattoos for guys are a good go-to, only if you are a fan of dramatic pieces. The meaning behind this tattoo? This is Achilles, who stands for power and strength. If you like masculine tattoos, you will enjoy this piece over your thigh.

Get Greek mythology tattoo designs if you like powerful and manly tattoos. Guys who like the meaning behind this tattoo could also stick to Greek quotes tattoos! Find your perfect inspo in one of these 16 designs, they are perfect for everyone!