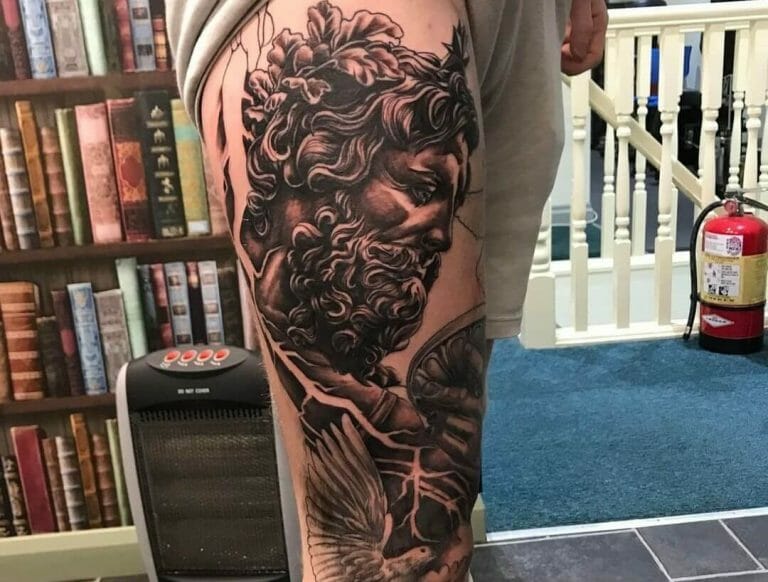 If you are a fan of Greek Mythological characters, especially their colourful Gods, then these Greek Gods sleeve tattoo ideas are just what you need to see.

If you are a Greek Mythology fan, then you have come to the right place.

Greek mythology and culture have some really interesting characters. But the most captivating of them is probably the Greek Gods.

If you are also a fan of Greek mythology and its colourful Gods, then this article is just for you. All Ancient Greek Gods have different powers and abilities. They also have control over different aspects of nature and human life. But the most fun thing about these Gods is the fact that they are full of follies. They are more human-like in nature and have human emotions and behaviour. If you are a fan o Greek history then you might already know all about it. But what is cooler than reading about these awesome Gods and their stories? It is finding cool tattoo ideas of them to ink them onto your body. If you have always wanted a Greek God tattoo sleeve or a Greek Gods tattoo half sleeve, then these sleeve Greek God tattoos are just what you need to see. We hope you find your perfect Greek God tattoo in this article we made just for you.

Even though both Ares and Athena are considered to be Gods of War, Ares represents the spirit of battle or warfare in the Greek mythologies. Since he represents war, he also represents the brutal aspects of slaughter and warfare. Even though Ares was never very popular in the Ancient times, we can always get a cool tattoo from this very brutal character. Ares is the son of Zeus and Hera, the king and queen of heaven. In this tattoo, we can see Ares with a lot of his symbols such as his spear, his shield and his helmet. Even though this tattoo is done in black and grey, you can always choose to get this in colour. The tattoo covers the arm, but you can also extend it into a whole sleeve by adding more details or another Greek God tattoo into the mix. Just tell your artist what you need and they will come up with the best tattoo idea for you.

We all know and love Poseidon as the great God of the Sea. But did you know that he was also the God of earthquakes, storms and horses? Well, this multi-talented God was also the brother of Zeus and Hades and one of the twelve Olympians that lived in Mount Olympus. He was one of the most important Gods of Ancient Greece and this amazing tattoo really does justice to his fierce character. This tattoo uses gold and blue detailing in a mostly black and grey tattoo to bring out amazing details in the face of God and also the background. It also features a trident which was the weapon of choice and also the symbol of Poseidon. This tattoo is really cool. And although it is on the forearm, you can also choose to get it on your arm and it will look amazing. So if you want a Poseidon Greek mythology tattoo, then this idea is perfect for you.

In the Ancient Greek culture, Hades was the King of the Underworld and the God of the dead. He is also the eldest son of Cronus and Rhea. He is the husband of Persephone and they rule over the underworld along with his three-headed ferocious dog Cerberus. This tattoo depicts both Hades and Cerberus in a ferocious manner which makes it look really amazing. The fantastic gold accents really bring out the ancient beauty of the God and his loyal friend. It also makes the tattoo that much more intricate and beautiful. It covers the whole forearm but you can also make a full sleeve tattoo of Hades, Persephone and Cerberus. If you are a fan of Greek Gods and mythological creatures, then this Ancient Greek tattoo of Hades and Cerberus is just what you need.

Have you ever wanted a Greek mythology tattoo sleeve with two Gods? Well, then this tattoo idea is perfect for you. This Ancient Greek tattoo sleeve has not only Zeus but also his brother Poseidon and it looks really amazing. These two brothers each ruled over a very important part of the mortal world, namely the sky and the seas. But they were also rivals who fought quite often. This tattoo has depicted their fiery nature perfectly. Zeus’s thunder and lightning, and Poseidon’s trident are also very important parts of the tattoo. Their faces look statue-like, which gives a more ancient and authentic feel to this Greek God tattoo sleeve.

Softly detailed geometric tattoos with different elements are very popular now. This tattoo of the Greek God Apollo is also done in the same style. Apollo was one of the twelve Olympians and the son of Leto and Zeus. He is also the God of archery, healing, medicine, music, poetry and most importantly, the God of Sun. This forearm sleeve tattoo of him shows his face along with his weapon the golden sword and his sacred animals the python and the crow. You can also choose to add more elements and symbols into the tattoo as it is a very open design. But ask your artist for what you want and they will make the perfect Greek God tattoo sleeve for you.

In Ancient Greek mythology, Athena is said to be the Goddess of war and wisdom. She was also the beloved patroness of the city of Athens. She was ever more popular as the Goddess of war than Ares because she was also the Goddess of peace and handicrafts. This Athena sleeve tattoo depicts her as a warrior with her weapon the spear and her sacred animal the owl. The owl was so famous as Athena’s animal that it also became the symbol of the city of Athens. This style can be used to make other Greek Mythology tattoos as well, such as Aphrodite tattoos, Achilles tattoos, Hephaestus tattoos and many more. This tattoo is done in black ink but you can also choose to get it in colour or add highlights to it.

Are you looking for a sleeve tattoo that has added details than just the faces of the Gods? Well, fear not because we have a perfect tattoo idea for you as well. This full sleeve tattoo of Poseidon and Ares has amazing, intricate details of not only temples and symbols of the Gods but also some calligraphy to top it all off. Poseidon and Ares together make up the sea warfare factor of Ancient Greece. That is why there are so many symbols belonging to both the Gods. The details of this tattoo make it look immaculate. Even though this tattoo features Ares, Poseidon and their symbolism; you can always choose to get tattooed with portraits and symbols of the Gods of your choice. You can choose the story you want to tell through your amazing Greek God tattoo sleeve.

Zeus is probably the most notorious and popular Ancient Greek God. He is the God of the sky and thunder and lightning. He is also the King of Gods in Ancient Greek mythology. Most people who want Ancient Greek God tattoos go for Zeus tattoos. This tattoo is a very good idea if you have also always wanted a very cool Zeus tattoo. This tattoo has amazing details even though it is done in black ink. It also has the eagle on top of Zeus’s head which is one of the animals associated with Zeus. You can get a tattoo of just Zeus or you can ask your tattoo artist to design a Zeus and Hera tattoo or a Zeus, Hades and Poseidon tattoo for you. If you are getting tattoos of multiple Gods, then you can get a whole back piece as well. You can also include symbols and important details to the tattoo whose meanings only you will understand. This will make it amazing and mysterious.

Hermes, in Ancient Greek mythology, is considered to be the herald or the messenger of the Greek Gods. He is also the protector of all mortal heralds, messengers, thieves, travellers, orators and more. This very interesting God also has a very cool symbol. Hermes’s main symbol is Petasos or his winged helmets. But other symbols for this God also include lyre, rooster and tortoise. Most people who get Hermes tattoos get it along with his winged helmet as it is one of the easiest ways to identify the God. This tattoo depicts him with the winged helmet but there are also many other details to the tattoo. The tattoo is almost realistic in style, which makes it look amazing. If you have always wanted a Hermes tattoo, then this half sleeve of the Ancient God is perfect for you. You can also add other Gods or elements to make this a full sleeve piece.

As mentioned before, the God of Thunder, lightning and the skies Zeus is probably the most popular God amongst all Ancient Greek deities. So if you have always wanted a sleeve tattoo design for your leg, then this leg sleeve idea is perfect for you. It uses the whole leg from the upper thigh to the ankle. It depicts Zeus’s half body in his warfare attire with his weapon, the thunder. It also has a crazy amount of details. And if you want a detailed leg sleeve tattoo of Zeus or any other Greek God, then you can ask your artist to make you the perfect tattoo design.

If you did not find your perfect Ancient Greek God tattoo sleeve here, then we have some more ideas in store for you. You can also check these out for added inspiration.