How to Get Andrea Pirlo’s Classic Style 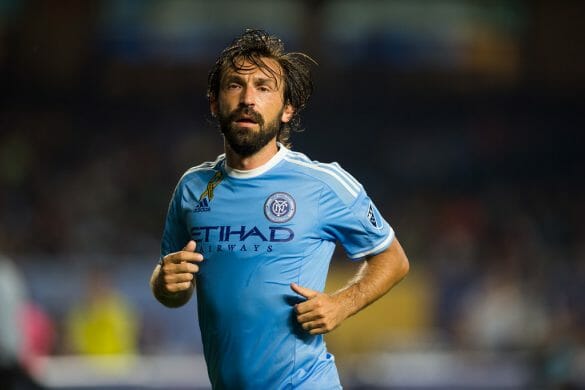 For this style icons guide, we look at Andrea Pirlo and his different styles as he continues to portray himself as the ultimate hipster. Read on to get the right haircut and fashionable outfit.

Where do we start when it comes to Andrea Pirlo? The ability? The laid back guy, with the classic look? Or maybe the beard every man wishes they could grow. Andrea Pirlo has worked throughout his whole career to be the most recognisable face of Italian football. In terms of being professional and a constant to the Italian team then Pirlo has been the go-to guy for more than a decade. Want to see some of his most stylish hairstyles?

For those of you who don’t know who the man above is, we’ll run you through his story. One of the game’s greatest ever, Pirlo was born in 1979 in Flero, Italy. Having quickly gained notoriety in his hometown Pirlo was snapped up by Brescia as a youth member. From there he was signed by Intern Milan, before being loaned out and moving to cross-city rivals, AC Milan, where he excelled as a deep midfielder. He then moved to Juventus in 2011 and won them a further four titles before moving to New York City in 2015.

Pirlo has won every major trophy in Italian football, as well as winning the World Cup in 2006 and became Italy’s fourth highest capped player in history. Fans go crazy over him still to this day. Pirlo’s Italy shirt is, to say the least, one of Italy’s greatest inspiration looks for true players. He is one of the country’s best footballing sons and his legacy. As well as being a footballing icon he is also a style icon, featuring heavily in Nike’s campaigns and also being snapped off the court for his classic Italian style.

Like any Italian man, Andrea Pirlo loves a suit. It’s something that is instilled in their culture and this definitely shows in off-field appearances. A suit in Italy is like a second skin and plays a vital role across all generations in showing a sense of class. Mr. Pirlo is never short of being stylish, epitomising traditional menswear. If you want a collar look that nobody can pull off as well as you and the legend himself, the outfit below shows exactly what we mean

For an athlete as renowned as Pirlo, it’s not surprising to see him in sportswear because of his endorsements over the last 20 years. As a professional footballer, he can be excused for feeling at home in a tricky. It’s certainly not the most stylish look away from the training ground, but sportswear is quietly coming back into style with cleaner looks. Don’t forget his texture as well that is coming through the hat, he might need to book a barber soon?

When it comes to casual, Pirlo is the King. What makes the man so cool is that he oozes style, making even the most simple of outfits look stylish. It is this trait that has made him quite a name both on and off the field. Now Pirlo plays for New York FC he has even more reason to be making himself look good. Pirlo’s signature style is now gracing the streets of NYC and we couldn’t be happier.

Simple colours appear to be a favourite of the midfield hero. Like his footballing technique, Pirlo’s style is underrated but says everything it needs to with minimal effort. The outfit below, for example, shows exactly how tonal pairings and precise Mr Pirlo is when it comes to his wardrobe. The secret is in being unique. A well-fitted and stylish army jacket, combined with some ripped jeans is effortlessly cool. It seems that as well as being the King of the football pitch, he is also the King of stylish footballers.

When it comes to that iconic long hair, Andrea has made sure that his hair has become a part of his look. The luscious long locks of the midfielder have become the stuff of legend, and he has the best hair in terms of quality & thickness. From a youth player to a senior hero, Pirlo has always made sure that his hair is mid to long in length. If you’re going to try and replicate the Italian’s style, then you’ve got to make sure that your hair matches his. Getting Pirlo’s is easily achievable if your hair is long.

You’ve got to look after your beard. We bet you that Pirlo’s grooming regime to keep that beard in tip top shape is up there with one of the strictest. Make sure that you trim it regularly and get rid of those split ends. Taking care of your beard is vital so wash it twice a week just like you would your hair. That beard isn’t going to help itself so stick to the regime and before you know it you’ll have a beard like Andrea.

How to Get Andrea Pirlo’s Classic Style

When it comes to trying to replicate Andrea Pirlo’s fashion sense, there are a few style rules that you should always remember. Keep it clean, simple, and tonal. Suits are a must in your wardrobe and they must be well fitted, ensuring you wear a tie with it. Casual is cool, tonal colours and a good few staple items will suffice. Your hair and beard must be kept properly. It’s vital that you look after yourself and keeping your hair and beard well-groomed will show. If you ever need any help, then refer back to this little guide and enjoy the Andrea Pirlo hair & outfit inspo.