10 Best Venom Tattoo Ideas You Have To See To Believe! 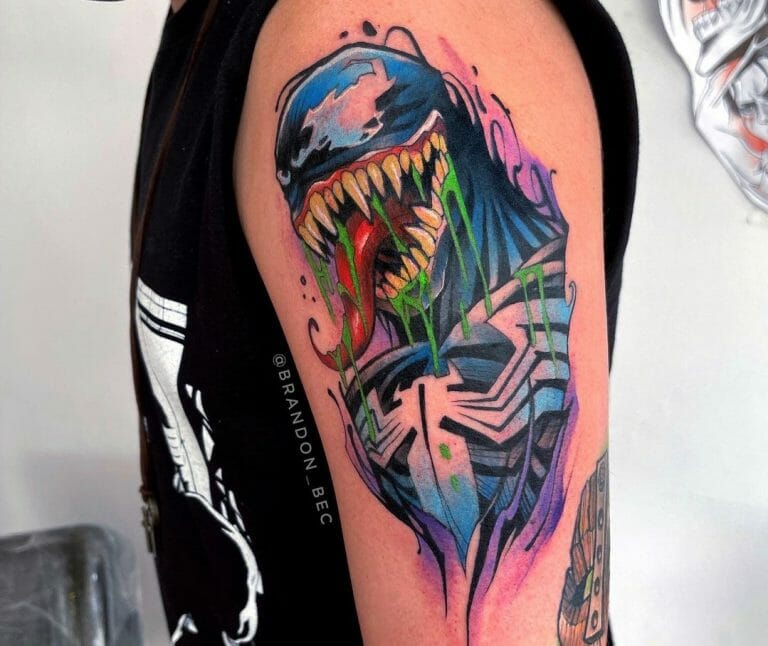 Looking for amazing venom tattoo ideas? You have stepped on the perfect place to find an insane list of venom tattoo designs every hardcore venom fan will love!

Venom is one of many alien symbiotes belonging to a fictional extraterrestrial race created by the Marvel comics and is known to bind with a human host for survival and enhanced powers.

Venom has attached itself to multiple hosts the first being Spiderman and the most popular being Eddie Brock. Venom has been a prominent enemy of Spiderman but after taking Eddie Brock as its host it has been considered to be an anti-hero.

Comic book characters have been an absolute craze of people since the day it was first published. There has always been a rivalry between people or most popularly called fan base for the reason being who are the best fictional heroes in the comic world, so people often tend to get their favourite comic character tattooed on their bodies just to show other people that they are crazy fans.

Venom since the day it has been made public by Marvel has a really strong and crazy fan base. Venom tattoos are becoming very popular all around the world. People can find huge variations of venom tattoos to get inked on their bodies. Although the most popular is for their arms, back and chest there are variations of Venom tattoos meant for other body parts and they too look pretty impressive. So here is an amazing list of Venom tattoo designs for Venom or Marvel fans that will for sure blow your mind.

Neck And Back Venom Tattoo

Every Venom fan should know that the alien symbiote is initially in a plasma form that needs to spread and bond with a host to get a proper and monstrous form. So this tattoo is a perfect representation of venom’s symbiotic spread on the body. This tattoo is a perfect and precise artwork made from the back of the head all the way through your neck till back made merely using solid black lines, textured shading with a heavy black application, little light accents of grey, and perfectly made dots in varied sizes. The tattoo artist needs to be professional and stable-handed to get this done. As the name suggests this tattoo looks the best on the neck and back but since the tattoo depicts the spread of venom on the body this tattoo design can also be done on various other body parts like your arms and legs.

Everyone should be familiar with the full-blown venom look that is after the venom symbiote bond has been completed. This super realistic tattoo is a perfect depiction of that. The tattoo industry has improved a lot from before and it is now possible to get amazing realistic tattoos like this one the only necessity being a professional tattoo artist and the required instruments. This skin art shows side-faced venom with a long lashing tongue and splashing drool. The tattoo is a super precise piece made only by using black, grey, and white colour mastered shading and this tattoo is undoubtedly one of many remarkable pieces. People who do not like too much black in their tattoos, this is not for you. This tattoo as shown is best to be tattooed on your thighs because this is a big tattoo design and will require a lot of skin and lifelike side-faced tattoos usually look best on a rounder skin base like arms, thighs, and legs.

Anyone here who is a fan of both traditional tattoos and cartoon-style character tattoos this one is just perfect for you. This tattoo shows venom and the creepy spider pattern on a flying blanket thereby making the tattoo more childish. On the whole, the tattoo is a traditional style classic tattoo thereby does include bold black outlines and typical colour shading. The blending of colours has been done perfectly and it has to be made sure that the other details like the spider pattern, eyes, teeth, and tongue are done precisely or there are possibilities that the tattoo turns out really bad. This tattoo is a pretty small one so needs a small skin space and a shorter time to complete. Anyone out for their first tattoo or who wants to cover a small portion of your tattoo sleeve can select something like this. The tattoo is pretty small so will look good almost anywhere but the best would be on your bicep, forearm, thighs, and hips. If anyone is interested carnage tattoos can also be done in the same childish and spooky style on your forearm.

The venom symbiote suit design and the character’s design, on the whole, is a stunning work done by Marvel comics and it has done a good job of making sure that venom’s face sticks to your mind. This tattoo is an impressive work and portrays a fully suited-up venom with its tongue lashing around but in a sick and creative way. The tattoo artist has to do precise linework making sure of the proper angles, and usage of contrasting colours so make sure you get this tattoo done from a good and popular tattoo parlour with talented artists. This is a side-faced medium-sized tattoo design so will look good on your upper arm or your thighs. This tattoo is created using colours so anyone willing to get a black and grey style tattoo, this might not be what you are looking for.

We all know the story of Spiderman having some power called the spider-sense and since the Venom symbiote bonded with spiderman for quite a while spider-sense does not work well against the venom. So this venom tattoo design is a perfect depiction of the same. Many people love to have two characters tattooed on them especially on their chest or their back and this might be one of the best for them. This is a complete black tattoo with spiderman with spider-sense not working that well while venom is aggressively shouting. This spiderman and venom tattoo has to be made precise so it can express the feel and theme properly. This is a huge and long tattoo piece made perfectly and since this tattoo takes a lot of body space or skin this will look the best on your back and not anywhere else.

As mentioned before tattooing has improved by multiple folds and it is possible to get lifelike tattoos. Anyone in search of a venom face tattoo idea that looks terrifying and will make people around scare for life, this is something you might be interested in. This tattoo could be an inspiration for beginner-level tattoo artists because this showcase of tattoo art made using deep saturation, monochromatic colour scheme, and sick and precise strokes, shading and blending is just on a whole another level. This is a huge venom tattoo so requires a lot of time and sitting and as the name suggests is meant to be made on your back. But if you can have a bit of patience and if the tattoo artist can do such a quality tattoo, the completed piece will turn out to be something that you will never forget.

Marvel comics do have numerous characters and venom has made a symbiotic bond with many of them. So this tattoo shows venom trying to get hold of hulk and hulk as usual being badass and infuriated. So if anyone is in search of colourful venom tattoos with more than one character involved here is the one for you. The tattoo has to be made very carefully making sure of every detail and the selection of colour should be made very precisely. Make sure you select a good tattoo parlour or an experienced tattoo artist to get this done. This is a mega-size hulk and venom tattoo and does need a lot of skin to get this done, so there is no better place than your back for this tattoo. If you ever wonder about how much time and sittings are needed, be sure it is a matter of lots of time, patience, and sittings.

Were you ever in search of a colourful venom tattoo although inspired by the film is much more fun to look at, now your search is finally complete. This venom tattoo has a cool winter look on and obviously has a fun look rather than a scary look which puts you in a negative space. The tattoo is of medium size and is much simpler to make when compared to those of a much more realistic look. But still, the tattoo needs to be done with beautiful and insane precision so better get it done at a nice tattoo shop. This tattoo is smaller in size so is suitable for multiple body parts but the best would be on your forearm, upper arm, back, thigh and girls can also go for their hips.

Although people love super realistic venom tattoos that exactly look like it was shown in the film, the cartoon or the anime art way of venom shown in the Marvel comics is something that can look really crazy. Some people who love the taste of comic book way of portraying can actually try something like this tattoo. This venom tattoo is made with really good strokes on the man’s face and hair to make it look like painting brush strokes and the perfect lines, amazing shades and the beautiful selection of colours does bring the entire tattoo to life. These tattoos take quite a large space so it is suitable for places like thighs, chest, lower hip, or on your back.

Venom And Groot In Black And Grey

Venom does have numerous fans all around but at the same time, Groot also has multiple fans behind him. So here is a design who are a fan of both venom and Groot. This design is completed using black and grey colours showing venom getting hold of Groot. This tattoo has to be done making sure of stunning linework, incredible shading and the artist should make sure that the emotions and expressions are pure and visible because that is what will make this pop out in front of a crowd. These tattoos are usually on the medium or smaller side so can be tattooed in most of the possible spots on your body but will look best on your arms, thighs, hips, and back. The artist should do neat work or it could turn out really messy.

Based on the growing popularity of the Marvel and Venom tattoo designs it is pretty sure that the above-mentioned list of Venom tattoo designs will not be enough for the crazy fans of Venom character and Marvel as they are even ready to cover their whole body with character tattoos. So here are a few more suggestions specially made for you.