10 Best Spawn Tattoo Ideas You Have To See To Believe! 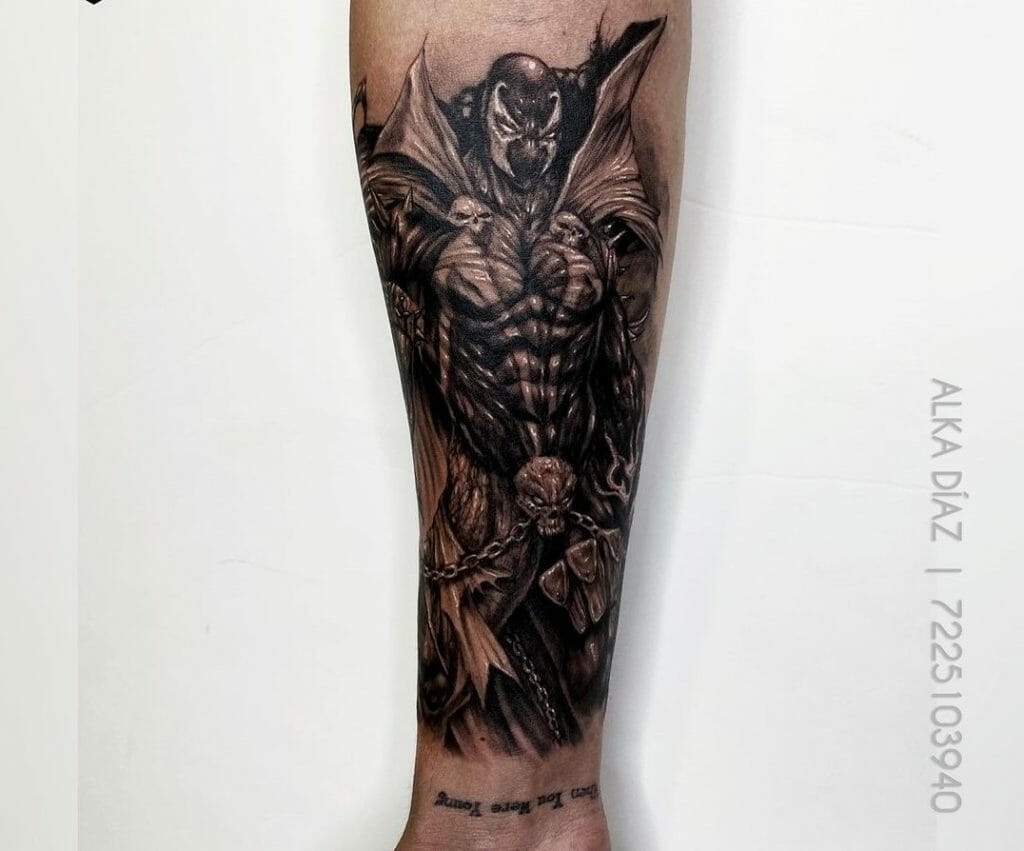 Are you a fan of DC comics and looking forward to getting a spawn tattoo design? Here are our top 10 recommendations that you must check out!

Spawn tattoo world symbolizes the destruction of something, only to be rebuilt in the end.

Hellspawn stands as a symbol of hope depending on things and how you choose to read its use in ways. It is one of the comic-inspired tattoos that have gained notoriety in recent years.

If you’re into DC comics, then you can agree that the use of Spawn, also known as Hellspawn, can be counted among the most treacherous antiheroes. Even after being one of the most unforgettable villains, one can’t help but be moved by Spawn’s story; after all, nobody is ever born evil which puts them up there in the unforgettable villains.

Spawn is a fictional character created by Todd McFarlane. He appears in monthly comic books of the same name. Spawn comics have also been adapted in a number of films, television series, and also as video games. The game has been played widely. Spawn used to be Albert Francis Simmons when he was still a human. He used to work in military services. Simon was betrayed, killed, and sent to hell in his life after death by his very own companion and work director. We can say he won the battle and literally crawled his way back from death (hell) and returned from his death to earth in the form of Spawn, finding his new purpose of destroying evil with evil and to improve and rebuild a better community.

A lot of people wear a Spawn hat with a Spawn logo, but very few are committed enough to get Spawn’s face tattooed on themselves. You can express your emotional connection with Hellspawn in the form of a tattoo. The Hellspawn tattoo world is rather large and has a lot to offer since the tattoos can be made in a large variety of styles. Here are some cool recommendations which might suit your interests and your personal brand.

Interestingly, controversial rapper Daylyt has a Spawn tattoo on his face. A lot of us have seen Daylyt’s face tattoo. In one of the interview videos on Youtube, Daylyt explains that his face spawn tattoo means what he’s doing and that he is destroying the world and then rebuilding it in his own way.

Among the antihero ink ideas, this is quite famous. In the above site, After Spawn returns from hell, he finds out his powers are fueled by necropolis in his own journey, and once they’ve run out, he’ll return to hell. And this is how he gets to killing and taking down street gangs, organized criminals, mobsters, and paedophiles. This brings him to the attention of natural and supernatural authorities who decide to hunt this dangerous ‘antihero’. Hence, this is why Spawn ranks among the antihero ink ideas. This style made spawn the black sheep even though he was against crime.

This tattoo is perfect for people who’re the black sheep in their family/community. The whole tattoo is made out of black ink except the awesome eyes, which are plasma green. The electricity, like green eyes, improves and adds to the style. It brings the whole black and white tattoo together and adds a sense of finality to it.

The Unforgettable And Awesome Villain

This Spawn tattoo is one of the most devious-looking comic world-inspired tattoos I’ve come across. This tattoo is definitely not for people with a juvenile aesthetic. If you’ve returned from your own personal hell and are ready to start and lead your own journey against the bad guys, you can visit and explore this spawn tattoo. The style is coupled with detail and speaks of the fact that the journey to salvation is through hell.

Have you been searching through the wide variety of comic world-inspired tattoos (Spawn tattoos in particular) but are tired of the vast black sleeves? This colourful Spawn logo tattoo might be just the heaven you’re searching for among every site. The game resources make it different and are cast on the place of the dorsal side of the palm. This is a comparatively simple tattoo cast out of clean line matter at the place and neatly filled with matter like coloured ink. The green lightning coming out of Spawn’s eyes gives us a sense of his phasing, psychic link, superhuman senses, telekinesis, cosmic awareness, and transformation control powers. When you can get to serve it properly, the style, the sign, the controls will be heaven.

This is undoubtedly one of the most beautiful Spawn tattoo designs among its counterparts. With a giant Violator looming over Spawn, this Spawn tattoo is perfect for incorporating in your sleeve and turning it into the coolest Spawn tattoo sleeve ever to exist. When Malebolgia sent Spawn back to earth from hell, he also sent a clown called “Violator” to keep a check on Hellspawn. The Violator torments Spawn and force him to use his powers to serve for the benefits of hell, while Spawn has to deny and fight against him constantly. If you’re also fighting against your inner Violator, you share an understanding with Hellspawn. So this tattoo might make you feel content.

This awesome Hellspawn face tattoo speaks for itself. It is bold, bright, and yet doesn’t have a bit of that juvenile aesthetic one night except large and colourful picture tattoos. Spawn’s facial features are clear in this tattoo, and he looks rather content. The wicked smile he gets after winning the fight against the bad guys, which eventually results in their deaths. To the hell you go! Spawn tattoos can be made in different ways, and this one is a bit on the minimalist side as compared to how the usual Hellspawn tattoos are.

This majestic tattoo sleeve is sure to have everyone taking a second look. There’s no tattoo lover who wouldn’t love this Spawn tattoo. There’s no way any artist would deny its beauty. Made out of black ink, this tattoo is among the top-tier tattoos in the world where hell, heaven, heroes, and villains all reside together. This tattoo is rather large and is a full sleeve. It’ll take a couple of visits to have it completed, but it’s well worth it. The tattoo looks like a sculpture set in stone. The work and dedication that the artist has put into this Hellspawn tattoo are quite obvious.

There are a lot of Hellspawn tattoos that we’ve come across. But what if somebody doesn’t exactly want to have the symbol of Hellspawn tattooed on them? Don’t worry; we’ve got you covered. Here’s a tattoo of the awesome Angela, the Hellspawn huntress that you might be interested in. Like her male counterparts, Angela is no less of a warrior. She goes into the battle with her head high and fights equally well in the battle, besides and against the men. She’s one hell of a Spawn huntress, and we don’t expect anything less from this fierce warrior. This beautiful tattoo is made from red, orange, yellow, black, brown, and blue ink. The fiery hair represents her fiery personality.

Unlike the others, this tattoo of Malebolgia can appear a bit grotesque to some people. However, to others, we can hope that people love this as it’s just another piece of art. Malebolgia is the original supper villain appearing as the antagonist in the Spawn comics. He is the one with whom Simmons (Spawn) makes a deal and returns back from hell. He is also the very person on whose orders Violator torments Spawn. This Malebolgia tattoo can also be seen as a symbol of hope and resilience. It’s a reminder of our demons, against whom we must constantly fight in order not to be consumed in the hellfire. This tattoo is not for everyone, but those who do understand the true meaning of it, have learned an important lesson in life.

This tattoo of Spawn is rather eerie yet fascinating at the same time. It depicts Spawn after his metamorphosis, supporting his Berserk Armour. One can sense Spawn’s power from this tattoo design. Each and every part of this Spawn tattoo is filled with black ink. The awesome details are mind-blowing and not at all ordinary. Anybody who wears this tattoo will definitely be extremely proud of it. The more a person looks at this tattoo, the more details are discovered. It’s hard not to fall in love with this Spawn tattoo.

Spawn And The Violator

This half sleeve spawn tattoo is another masterpiece from the comic world of heroes and villains. This tattoo has both Spawn and Violator, who’s his monitor from hell, and also his archenemy. In this design, Spawn is drawn on top and has a larger image. This tells us about the person who is the lead hero and has the upper hand in the battle. It looks like Spawn is about to crush Violator in a battle. This awesome tattoo is again entirely made out of black ink, and we are absolutely sure it is perfect for somebody who wants a half sleeve tattoo inspired by the Spawn universe.

Visit the links to explore the activity of various quality artists depending on your taste, and we hope you will like them. There are a number of things to choose from, from death to, hope; based on the information you read in this article. You get to learn various parts of your body coupled with a tattoo to make it look prettier. Some of the tattoo recommendations to love and choose from unlike from the site that you may find awesome and be interested in:

2: Spawn face tattoo will express death which we all love to share.