10 Best Southern Cross Tattoo Ideas You Have To See To Believe! 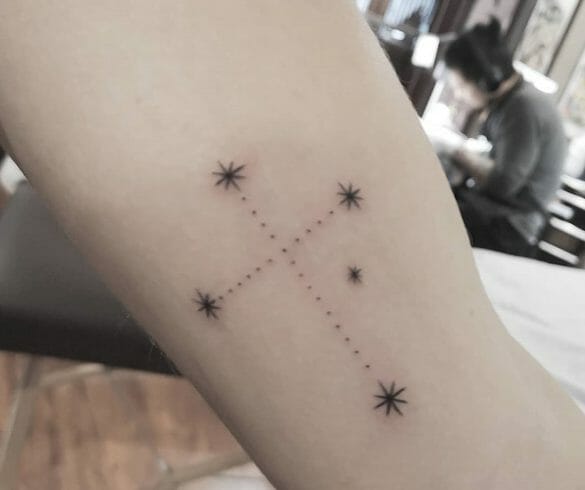 The Southern Cross was a star constellation, primarily composed of stars in the Scorpius–Centaurus Association.

What is a southern cross tattoo? It is a patriotic representation in Australia, as it signifies their geographical position in the southern hemisphere.

People also prefer to get this tattoo if they like the design and aesthetic vibe of southern cross tattoos. It is a beautiful representation of faith and hope, which is why people want to have a southern cross tattoo inked on them. The southern cross was a meaningful symbol for the Egyptians, too. The connotations are the spot where Horus, the Sun-goddess, was crucified, marking the passage of winter. The Aborigines and Maori saw the Southern Cross as representing animist spirits that were a crucial part of their ancestral beliefs.

You can choose from various styles of tattoos from Celtic designs, simple or even a gothic style. In this article, you will see some gorgeous southern cross tattoos design that will leave you amazed.

This constellation tattoo is a style of simple art that shows the beauty of the stars representing the southern cross. It represents the constellation of the sky, and the majority of people get this for its aesthetics. The five stars are inked in black ink with solid fill. This southern cross tattoo is placed on the wrist and can be recreated on the back, hand, and as a foot tattoo. This symbol of the stars shows how incredible the earth is out there. Those who love the stars and are looking for a simple tattoo design should opt for this!

This is yet another style of the stars representing the southern cross tattoo. This southern cross tattoo features the five stars with a crescent moon in the center. The stars are drawn in simple lines. The moon uses dot work and shading to create an elegant design. It is placed on the back of the upper arm.

The southern cross has often been linked to the negative patriotism of a country and the notions of colonization. Southern flags aren’t just present in Australia and New Zealand but also in other countries like Brazil and Uruguay. However, it has been an essential aspect of Australian culture. Central Australians, in particular, look upon the southern cross constellation to navigate them. Having this symbol in their flag gives them a sense of patriotism for the heart of their country.

This Southern cross tattoo shows the Earth in its orbit in the solar system, with the five stars around it. However, Earth’s orbit is shown to be a boomerang. The boomerang-shaped orbit is inked in black dot work. As shown in the picture above, it looks great on the arm. But you can also get it as a back, foot, or calf tattoo. It is quite a simple design that won’t hurt as much as other elaborated tattoos. The additional elements make this simple tattoo look stunning. If you wish to get a tattoo related to the southern hemisphere or southern cross, you can consider this gorgeous design.

This tattoo idea shows a unique and captivating representation of the country of Australia. The tattoo combines the sun and moon in one circular outline, where the crescent moon is filled in black ink. Emanating from the top half of the circle are the Sun’s rays, drawn in fine black lines and dots. Outside the lower half of the circle, near the moon, is the night sky with stars twinkling across and the southern cross constellation. The lower part of the tattoo has a smooth texture inked with dot work. The detailing of this gorgeous tattoo idea is magnificent, and the textures are simply divine. There is a lot of geometric dotwork to it, which adds to the beauty of this design. You can place this tattoo on the upper arm.

This is a symbol of what Australia looks like, the southern cross representation of it. It features the Waiheke hills landscape in black outline with the southern cross and stars placed above it. This cross-hand tattoo is minimal in design and has many little stars spread across.

Getting this symbol of the south of the cross in ink would look great on the back or hand. The stunning detailing and textures of this design show how something that seems as simple as this can be so alluring. You can also add elements of your own if you wish to customize the design a little.

These southern cross stars are depicted in this tattoo against the black night sky. The four square parts come together in a unique way to represent this south cross tattoo, that will leave everyone in awe. It would look quite lovely as a back tattoo as the back offers enough space for the entire tattoo to fit graciously. While there is some stigma associated with such tattoo designs, you can get one to simply celebrate your Australian heritage.

This colourful tattoo is a medley of elements like a compass, the southern cross, the land, and the sea. The gorgeous colors of this southern cross design are eye-catching, and the overall design looks excellent. Geometric shapes are included to depict different parts of the compass. If you want a bigger tattoo with more detail, you can create this one as a cross chest tattoo.

This Southern Cross tattoo is inked on the arm in thick, black lines. Each star in the constellation has a subtle, circular border done in dot work. The cross linking the stars is drawn in a dotted line. This tattoo looks wonderful on the arm. If you wish to depict your connection to Australia, you can add your own elements to this tattoo, like the wild animals or beautiful scenery.

This beautiful nature-inspired Southern Cross tattoo is placed on the upper arm. Inked completely in black, this tattoo features the mountains in a rhombus shaped outline, with the southern cross in the sky and a river flowing out of the frame. The cross tattoo design also signifies spirituality and faith for Christians. Many get a cross tattoo to show their love and passion for Christ and ensure that the tattoo is done with utmost respect and care.

Here are some more examples of the Australian southern cross tattoo to show your love for the cross, stars, and travel.