10 Best Sak Yant Tattoo Rules You Have To See To Believe! 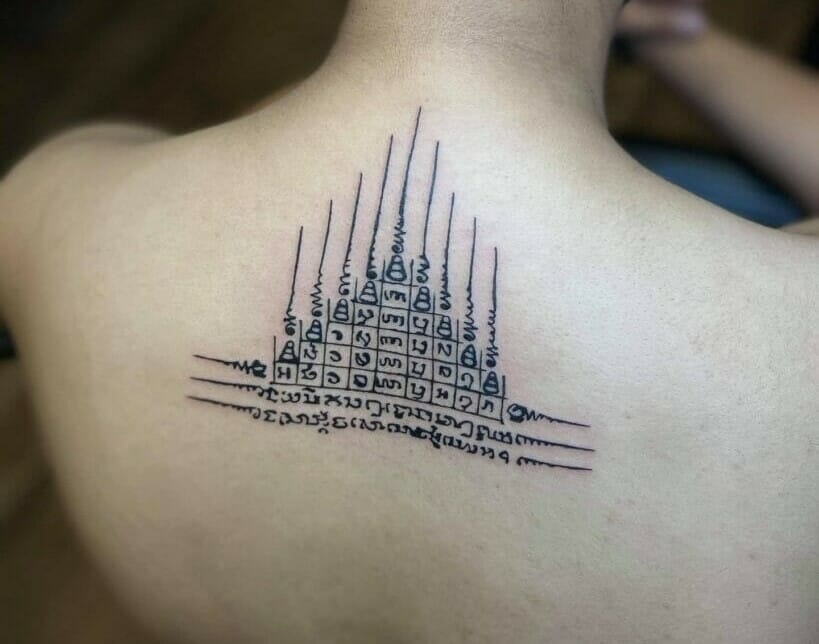 In Thai Buddhism, sak yant tattoos, also known as yantra tattoos, are tattoos with mystical powers, designed and etched by Buddhist monks or an Ajarn. The tattoos are combinations of meaningful images and powerful incantations.

In Southeast Asia, different sak yant traditions have different rules of conduct to follow, and the rules of each lineage are handed over by a sak yant master to his students who get a yantra tattoo. But, nowadays, the rules available on the internet are misunderstood versions of the rules taken from the famous monastery in Thailand named Wat Bang Phra. The rules of this monastery is different from other sak yant rules. For instance, the monks of Wat Bang Phra can not eat star fruit, pumpkin, or eat left overs. They should never duck under any washing line or banana tree because women may wash and hang their clothes there during their menstruation period. They should not get involved with anybody’s lover. Even they are prohibited from ducking under any overhanging building, small bridges or a single head bridge.

The sak yant tattoos are believed to provide the wearer with magical blessings. Following are the five major sak yant rules one must follow after getting inked with one, a) do not kill b) do not drink alcohol, c) do not speak ill d) do not lie or steal, and e) do not get engaged with another person’s lover or, cheat your spouse. Apart from these major rules sak yant tattoo wearers must not commit evil deeds or take drugs. Therefore, whoever decides to get a yantra tattoo must become a good person and lead a good life.

Monks and Ajarns in any Buddhist temple in Thailand never use a tattoo gun. Buddhist monks use bamboo needles or a steel rod with steel tips called khem sak. If you want to have the ultimate spiritual experience, then you can go to any Buddhist monastery and ask any monk or master ajarn to get you inked with a yantra tattoo. There will be a sak yant ceremony, and the sak yant masters will choose the right design and the location on your body where the tattoo will be etched.

This Hah Taew or Five line sak yant tattoo, embellished with lotuses, is one of the most popular sak yant designs in Thai tattoo art. Angelina Jolie also has this design etched on her back. This 700-year-old design is believed to be discovered by a Buddhist monk from Chiang Mai. The five ornate lines serve five purposes. The first line protects the wearer against unjust punishment, the second line against a bad future, the third line protects from curses, the fourth one boosts the wearer’s energy level, and the last line helps gain attraction to the opposite sex.

Getting a sak yant tattoo might be painful, but if you have set your mind then you should go for this yantra design. This Paed Tidt is a circular design consisting of eight yant Ongk Pra and eight Unalome designs. The yant Ongk pra is a design with three oval shapes and is said to represent Lord Budhha. These eight yant Ongk Pra signs also represent the eight directions of the universe. This sak yant design is considered to be a magical tattoo, which protects travellers from evil spirits and wards off obstacles. The eight yant Ongk pra designs carry eight different meanings.

If you are willing to get this intricate sak yant tattoo etched on your body, then if possible, avoid going to any random tattoo shop. You can go to any monastery in Thailand and have a divine experience of getting one yantra tattoo.

Perhaps the simplest design among Buddhist tattoos , Unalome is replete with symbolic meanings. The pattern of the Unalome shows a single line coiling and twisting upwards into a straight line. The coiling part at the bottom represents the moment of birth, and the twisted parts above it are symbolic of the difficult journey a person takes in his life. The straight line which erects upwards conveys the message that by overcoming difficulties of life, man is heading toward freedom and enlightenment. And the three separate dots placed vertically at the very top of the tattoo symbolizes man’s freedom, goal, and enlightenment.

This sign could be found in almost every sak yant tattoo design. But if you want to have a simple tattoo, then you can get yourself inked with this sign only.

This yantra tattoo, featuring an apsara, has its roots in Khmer tradition, which is an amalgamation Hindu and Buddhist culture. Khmer tattoo is a part of Cambodian art that has influenced the Thai culture of sak yant tradition.

In this tattoo, a beautiful apsara has been inked with black and grey ink. The apsara is sitting on a lotus with her eyes closed and hands lifted in a dancing “mudra”. This tattoo will look stunning on your forearm.

This sak yant design is the ideal one for those who want to get a sak yant design with the power to ward off black magic or curses. The nine peaks of the tattoo are representative of the nine attributes of Lord Budhha. This design is believed in Thai culture to be the protection of the wearer against any harm or danger. The nine peaks of the tattoo have nine different names and powers.

People wearing this tattoo are believed to be treated by others with great love and affection. This tattoo fits perfectly well on the back, or chest.

This Soy Sung Warn or necklace sak yant tattoo is a magical tattoo popular among Thai soldiers and Muay Thai fighters.The necklace design resembles the shield worn by ancient worries. This tattoo is believed to protect the wearer from any weapons, and it is also believed that the special spells on it help protect the wearer from any fatal accident.

The Twin Tiger Sak Yant tattoo is usually inked by Muay Thai Fighters and by Thai people associated with risky jobs. Like any other tigers, these two tigers also represent power, strength, fearlessness, and protection. These tigers have magical powers with which they help people in their respective businesses, and they can also provide the entrepreneurs with the courage to start a new business.

Wear this tattoo on your back, chest, or abdomen area and receive admiration from the onlookers.

As mentioned before, Thai culture has been heavily influenced by Hinduism. In Thai culture, the Phra Ra hu Ohm Chand, or The Moon Eater is considered to be the Lord of darkness. In Hinduism this moon eater figure is known as Rahu, who is often depicted as eating the sun or the moon. Even though in Thai culture Rahu is considered to be the representative of bad omen and danger, this sak yant tattoo is often etched by people to have their luck guarded against bad fortune.

People often get etched with this design to protect themselves from dangers and harms. You can wear this tattoo on your back or chest.

This is one of the most popular sak yant tattoo designs. Ganesh, also known as Vinayaka in Hinduism, is the God of knowledge, prosperity and energy. In Thai Buddhism Ganesh is known as Phra Pinajet. This sak yant tattoo is mostly done by people who want to flourish their business and prosper in life.

This sak yant tattoo is believed to be the protector of wealth and other valuables as well. You can wear this tattoo on your shoulder, back, or chest.

In many cultures, turtles are considered to be the representative of water, earth, and fertility. The turtle has the power to protect itself on its own, and therefore it is also symbolic of protection and power. It is believed that Budhha had once been incarcerated as a turtle to protect humanity from drawing.

The term Dato Ruen means turtle house. Legend has it that the turtle incarceration grew the size of a house. You can wear this sacred tattoo on your neck, forearm, shoulder, or chest.

In English, sak means “to tattoo” and yant means “yantra”. Therefore, sak yant roughly means yantra tattoo.Every single sak yant design has a deep and significant meaning attached to it. The sacred incantations that are etched with unique designs are usually Khmer, Pali, or Sanskrit words. People often get confused about the sak yant cost. Actually, sak yant tattoo costs varies a lot. A sak yant tattoo can cost $120- $550 depending on its size and placement. Even different Ajarns charge different amounts. If you are concerned about the intricate designs and do not feel bothered about what your tattoo reads, then you can always visit any tattoo shop and ask the artist to get yourself your favourite sak yant design.

Not satisfied with the aforementioned ideas? Don’t worry we have some more mind-blowing sak yant tattoo suggestions for you. Here goes the list,