10 Best Lotus Flower Tattoo Ideas You Have To See To Believe! 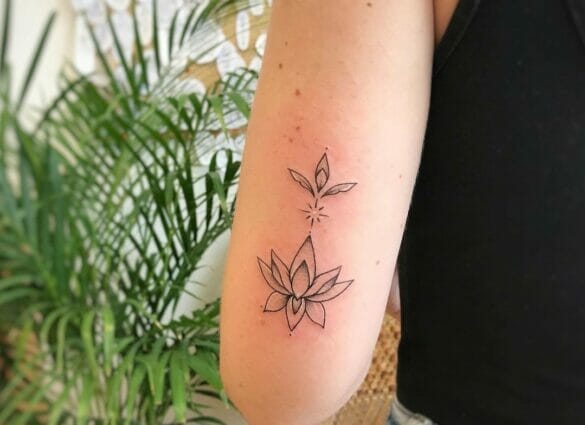 If you’re searching for a tattoo that symbolizes pure love and enlightenment, a lotus flower tattoo that refers to the Padma, according to Hindu beliefs, would be a suitable choice.

Lotus Flower is believed to represent the journey of becoming a better person.

A Lotus Flower symbolizes that one has to rise above the temptation to achieve spiritual awakening when it signifies pure and deep meaning. Why not get a lotus flower tattoo!

Lotus flower grows in dark, muddy waters. Despite that, It is the most beautiful flower. We get to see a lotus blossom, usually within a week. Asian Art portrays the lotus flowers as a sacred lotus throne used as a pedestal or a seat for divine figures such as Gods Vishnu. Lotus Flower is also said to signify compassion, strength, and purity. It even illustrates the concept of Eternal Life. It is said that tattoos are placed with the intention for them to last longer and have a personal meaning to them. Nowadays, small lotus flower tattoos are very trendy. Even a tiny lotus flower can be of divine beauty. Typically, a lotus flower has about 18 petals. In the Buddhist religion, a lotus flower symbolizes the stages of enlightenment. The lotus flower, which has eight petals, corresponds to the Eightfold Path of Good Law.

In Egyptian culture, the lotus flower symbolizes rebirth. Lotus Flower is a delicate flower, has a spiritual meaning to it. The universal meaning of a lotus flower is spiritual enlightenment. The broader question is whether getting such a tattoo can be considered “cultural appropriation,” which has become a problem in modern society. The answer to this depends on why you are getting a lotus tattoo. Whether you are getting it because it has significance to you; or because other people have done it. Either way, it’s not a heinous act. So much of tattoo design involves “cultural appropriation” – Japanese-style tattoos, native American skulls, Chicano candy skulls, dragons, Chinese characters, etc.

These ideas will make sure the next tattoo you get would be a lotus flower.

This small tattoo of a lotus flower with the ♀ symbol is done on the forearm. The ♀ symbol is associated with the female gender. ♀ has Greek origins—the Roman goddess Venus or the Greek goddess Aphrodite. The ♀ symbol is thought of as Aphrodite’s hand mirror.  Aphrodite is the goddess of love and beauty, while the Lotus represents a pure soul.

The circle of the ♀ symbol also looks like a sun. Encircling the lotus flower and shining light to it, and making it bloom. This ties this tattoo to Egyptian mythology as well.

Floral tattoos signify some meaning in most cultures, and their meaning depends on what flower you choose to ink on your body. The Lotus opens in the morning and closes at night. It represents the sun, or creation and rebirth. The Egyptians thought that the Lotus marked the beginning and conclusion of the day.

­­Tattoo designs in black ink such as Mandala Lotus Flower would be a great choice as a bigger tattoo on the back. This back mandala lotus flower tattoo of the lotus flower tattoo in black ink on the back is an example of the phrase bold and beautiful. Moreover, this tattoo is vertically symmetric. This evokes the idea of finding beauty into symmetricity which many ancient cultures around the world. That can be seen in a plethora of ancient monuments. The Taj Mahal, the Eiffel Tower, and the Pyramids of Giza are a few examples among many structures which include symmetry in their design.

The tattoo also looks like a chandelier that seems to glow and radiate light around it.

Blue lotuses are somewhat rare in nature and hence are considered significant in many cultures. Blue Lotus means wisdom, knowledge, and the ability to control our emotions and material desires and inspire us to develop our senses and have faith in ourselves. The color also ties to Buddhist beliefs, representing self-awakening.

The text reads Ram, the Hindu god Rama. In Hindu mythology, this is connected to Lord Vishnu (the protector) and Lord Brahma (the creator). The Lotus is India’s national flower. The lotus blossoms in murky, shallow lakes and ponds that are exposed to direct sunshine. In chilly temperatures, the Lotus will perish. Purity, elegance, tranquillity, and beauty, in general, is the lotus flower meaning.

Lotus Spine tattoos have become a trendy thing these days. It’s a popular choice among girls as the spinal area can be a great spot as it is a delicate part of the human body. Lotus being rich in its symbolic meaning, is very captivating. The tattoo reads, le plus grand secret du bonheur c’est d’être Bien avec soi. This translates to the biggest secret of happiness is to be good with yourself.

The tattoo is of a blooming lotus flower done on the arm. It shows how each representation of the life cycle of the Lotus is growing from the stem of the other.

According to Egyptian Mythology, the blooming of a Lotus Flower marked the beginning of life on Planet Earth. Egyptians believe the Lotus Flower is the symbol of a life’s origin and reincarnation. It is not hidden from public view deliberately, which shows its boldness. It also offers the growth of a being from a bud to a flower. A lotus flower blooms when the sun’s light hits its petals. Lotus Flower Tattoos are considered inappropriate to place the Lotus in an upside-down position as it would mean the opposite of enlightenment, which is symbolized by the lotus flower.

This is a beautiful arm tattoo with detailed imagery of flora (the Lotus) and fauna (the koi fish and the crane). It is inspired heavily by Chinese and Japanese cultures. The crane represents longevity and good fortune, while the Lotus symbolizes the pure nature of one’s heart and mind. The koi fish shows fame, harmony, and wealth in Chinese culture. It is also interesting to note that all three depend on the body of water for their livelihood. The lotus flower is attached to the water by its stem. It gets its nutrition from the water and stays afloat on it.

Geometric Lotus Flower Tattoo represents the creation of all life’s mysteries, time, and life itself. These geometric design, shapes, and symbols have the power to bring good fortune and health, protect and provide enlightenment. These sacred geometric line tattoos speak for themselves. The circle and the oval over the lotus flower look like the sun’s reflection on the water.

One of the most popular placements for small tattoos is the Triceps, the region above the elbow. The Lotus Tattoo at the back of the arm also seems to do justice. Some people find it fascinating to have a large design of lotus flower in the middle of the back,

Here the Colorful Lotus Flower has vivid colors in it. Some of them are blue, pink, purple, and yellow. But the leaves are shown as colorless.

It is a Lotus Flower Arm Tattoo. The tattoo shows a Mempo looking at a pink lotus with autumn leaves in the background. The Pink Lotus is idealized in Japanese culture due to its growth from the dirty and murky water but keeping itself clean and growing into a pure and beautiful flower.

The samurai (a Japanese warrior) is wearing a Mempo mask and is looking directly at the Lotus to admire its beauty. The lotus’ beautiful colors are a sheer contrast to the intimidating appearance of the samurai.

This tattoo is somewhat similar to the tattoo on the back with bold black colors and vertical symmetry. And it looks like a chandelier connected to the two rings and is hung to them. The numerous geometrical patterns on lotus petals give it a highly appealing appearance. A little inverted lotus appears to be a mirror of the Lotus in the water. A Lotus Flower Tattoo will also be considered disrespectful if one gets a lotus flower tattoo on their feet as a Lotus flower, which according to religious beliefs, is a sacred flower.

Lotus Flower tattoo designs are simple lotus flower tattoo or small lotus flower tattoo. A tattoo artist would be obliged to the tattoo lotus flower as it is a sacred flower.  So, the belief that getting a lotus tattoo will be offensive is false. People might like the delicate designs of a flower on their body that expresses something. However, Cultural misappropriation should not be considered as long as the tattoo is not insulting and the message behind it is respected if there is one. So, it is not wrong to get a lotus flower tattoo if you want to represent its cultural significance or at least don’t mean disrespecting it.

Here are some more inspirational simple lotus flower tattoo designs that you can discuss with your tattoo artists by understanding their symbolic meanings and giving them your personalized meaning.