10 Best Red Thread Of Fate Tattoo Ideas That Will Blow Your Mind! 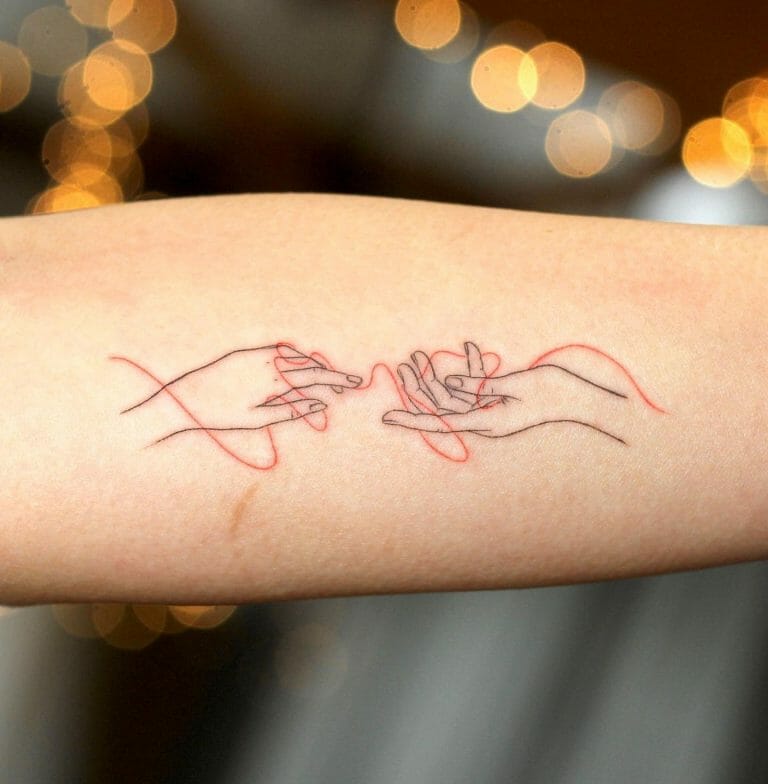 Ever noticed someone wearing a plain red thread for a tattoo? Well, here are some of the red thread of fate tattoo designs that will explain it all!

The red thread of fate is an increasingly popular tattoo motif with its roots in Asian culture.

Red string tattoos are a crowd pleaser when it comes to couple tattoos. However, they are not exclusively meant for romantic relationships.

According to a popular legend in Asian culture, the invisible red thread connects and ties two people who are destined to be together. The original Chinese myth accounts for a lunar matchmaker god, Yué Lâo, who went about tying an invisible red thread around the ankle of two lovers who were predestined to be together. Similarly, the Japanese legend tells the tale of an old man who searched for kindred spirits on Earth and tied them with a red string. These people need not necessarily be romantic partners, but people who would influence each other in life. The red string found in Chinese culture is tied around the ankle, while Japanese lore and Korean culture depict tying it around the pinky fingers.

This myth resonates with the Western concept of the twin flame and applies to platonic relationships at the same time. Such a thing might seem like the subject of ancient folklore but pay attention to your surroundings, why do you feel tethered to a certain someone? Thus, the red string of fate symbolises an unbreakable bond that brings two people together no matter their individual choices or even significant life decisions. Ready to ink such a strong bond on your skin? Keep scrolling to find out our top 10 designs that are sure to inspire you!

The most popular red string tattoo design is that of a thin scarlet thread wrapped around the little finger with a simple bow. Here, the red line wraps completely and the bow is placed on the side of the finger. The colour red is a symbol of good fortune in many Asian cultures. It is a prominent presence in traditional Chinese weddings where the bride and groom are dressed in red for ceremonies.

Visualise a picture of you and your soul mate tied with the red thread of fate. This is what it can look like! Etch a pictorial representation of the invisible red string on your body where the Gods tie an unbreakable knot. This design is particularly great for it gets you a complete picture of the myth with the use of red and black lining.

The red string tattoos are not only limited to the pinky fingers. Here, the red line wraps completely around the wrist to give you a basic red string tattoo. You can have a neat bow right in the middle of your wrist and wear a minimal tattoo with perfection!

When you see someone wearing a red string tattooed around their wrist, it does not necessarily mean a violation of ancient Asian beliefs. In fact, in Kabbalah and other religious forms of Judaism, people wear a tiny red string around their left wrist as protection from the evil eye. Which is to say, no matter which culture or religion you subscribe to, the red string of fate remains a pertinent symbol of good luck and well being.

‘Well, if the red thread is such an acutely positive symbol, why not use it more aesthetically?’ We hear you. Here, the tattoo artist shows you an ethereal design using little red strings and floating petals. The idea is simple yet looks fascinating when executed.

We are not shown the ends of the string, but only the middle. Which might be purposefully done to focus on the journey that two partners go through to meet each other. Yes, your predetermined future affirms that you will meet your soul mates, but never has it been a walk in the park. This tattoo recognises and honours that act of gravitating to your destined person while marking it beautifully on the side of the wrist.

Tagging along with the essence of the last tattoo, the artist here captures an individual enmeshed within a loop of the red string of fate. The colour contrast of black and grey with red subtly highlights the arm tattoo without overdoing the idea. The figure is finely drawn with impeccable shading techniques that further increase the visual appeal of the tattoo.

The individual suspended upside down can mean a number of things. They are as if lost in the process, yet yearning to find their soul mate. This brings us to a greater worry, dealing with the hardships and loneliness before reaching the endpoint. Whether you believe in the red string theory or not is an entirely personal stance, but the anguish of the process is felt by the whole world. This tattoo string shows the journey of self-identification and self-love that we all must undertake before we fall deeply for another person.

Tattoo artists often use butterflies to beautify red string tattoos. The pink and blue butterflies can be seen as representatives of the two people with complementing personas who remain connected through the red string of fate. The patterns on the wings are intricate and become the prime focus of this tattoo.

You can also use butterflies to plainly ornament your red string of fate tattoos as is shown in the picture. The tattoo artist here takes the most common image of the red strings tied around the little finger and couples it with two red butterflies on the side. Red butterflies, being symbols of romantic relationships and good fortune, further enhance the meaning of the legend, presenting an elaborated visual that you can never get bored of!

Here the artist draws a slender pair of scissors amidst small red strings. The colour gradient used here serves the purpose of delivering a clean design with contrasts. The scissors are quite decorative and make up for the simplicity of the red thread. This minimal tattoo can easily be inked as a red thread of fate ankle tattoo or on the arm like it is shown in the picture.

The Japanese legend accounts that when red strings are tied to a man’s thumb and the pinky finger of a woman, the bond is such that nothing in the world can break it. Difficult circumstances and other people may attempt to pull and test it, but the tie is never to break. Here, the scissors highlight the meaning that hurdles might come your way but will never affect the red string of fate.

Get you and your partner a matching red thread of fate tattoo drawing inspiration from this super cute design! The plain red string on the man and a simple bow on the pinky finger of the woman serves to distinguish the thread between the two counterparts. You can also try getting true love soulmate tattoos using a thick band of red string on the ring fingers and set the trend of the red thread of fate wedding tattoo.

Couples can also opt for a plain red string on their left wrists to ward off the evil eye. Here, the artist elevates the design using a complex, yet neat bow tied on the wrist. This tattoo will not only mark the union of two souls but also protect you from negativities.

It is impossible to talk about the red string of fate without mentioning the anime that popularised it among youngsters! The two protagonists of ‘Your Name’ find their lives exchanged in often awkward circumstances but what follows could only be the doing of this magical cord. The artist etches the piece of red ribbon that immortalised their bond with utmost precision. The Japanese lettering further fits the design in the context of the movie.

This design takes the story of ‘Your Name’ to another level with the use of geometry. The two spheres represent their lives that are intertwined with the red string of fate. The geometric lines and motifs enhance the dramatic look of this tattoo design.

Stepping further away from the romanticism attached to the red thread, the artist here focuses on a vivid portrait of a bird holding the string of fate in its beak. The interplay of black and grey in the body of the bird keeps an interesting monochromatic balance while the string spells ‘fate’.

We know about the legend of the old man fixing people’s destinies. But the artist here surrenders the credit to nature and her mysterious ways. If you are an agnostic person, this tattoo might just be the right click for you! You can also experiment with the placement of the tattoo and place it on the upper arm for a better chance of exposure.

Transform the ancient Chinese legend of the red string into a full-fledged charm drawing references from this design! Here, a lotus is etched in subtle shades of pink while small red strings dangle on either end. The golden border accentuates the flower motif while going over the top.

The lotus here alludes to the Buddhist idea of the flower meaning spiritual awakening and simultaneously complements the concept of the red string of fate. You can exchange the flower with Chinese scripts for a toned down version of the tattoo.

Red string tattoos symbolise an array of things in different cultures but the common denominator is that of auspiciousness and good luck. These tattoos can be placed in places than the fingers and would still mean the same. Ready to get inked yet? Try some of our suggestions given below for a boost in creativity: