10 Best Pirate Skull Tattoo Ideas You Have To See To Believe! 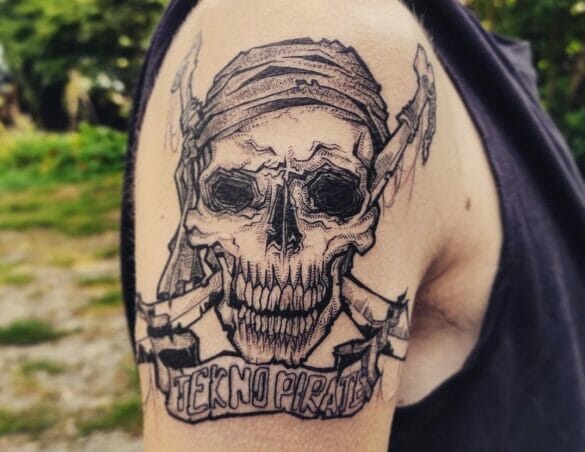 Looking for some badass tattoo ideas that can match your dashing personality? Here is a list of the Best pirate Skull Tattoos for you.

A Pirate Skull Tattoo with crossbones has a badass look which can define your cool personality.

Pirate skull tattoo is one of the favourite tattoos among tattoo lovers of all ages. This kind of tattoo design is often mistakenly associated with the rustic and bohemian people but is adored by almost everyone.

Skull and the crossbones symbol was first used by pirate ships to inform the targets they’re under attack. The flags flown in pirate ships in the past were called Jolly Roger. In today’s world, it is a widely popular fashion symbol which also symbolizes any form of resistance against authorities.

Skull tattoos can be portrayed in various ways by their owners. Earlier, people those who belonged to the pirate community had these tattoos but nowadays it is worn by people from every section of society and symbolizes positive human traits like bravery, courage, loyalty, deceit, unity, and wanderlust. All of these traits are associated with pirates.

Here are some interesting and fresh pirate tattoo ideas you might want to ink:

The innovative design of this tattoo is very catchy. It is quite different from the traditional skull tattoos. This small and colourful design is meant to make you instantly recognizable whenever you enter a room. This tattoo is a very lively piece of art that you can consider to ink on any part of your skin.

Not every tattoo design is for every part of your body.  Small and minimalist designs look great on small surface areas but longer surface areas of your body require longer and more detailed design.  This tattoo has great detailing and the blue tingly eyes not only enhance the beauty of the tattoo but at the same time gives the tattoo a great dimension. This 3D tattoo design in monochrome is a flawless beauty that you can definitely consider.

Here’s a tough and bold pirate skull tattoo which is a classic one! In this, a pirate skull wearing a cap is seen holding a machete between its teeth. This is a colourful piece of art that you can definitely consider getting on your shoulder or upper chest.

Thinking of getting your biceps inked? here is a great design that you can consider. This 3D tattoo design is a great one in monochrome. It has the most important element to which pirates are associated; the ship. A nearly damaged skull with a medieval vessel does create another level of horror to this design.

The choice regarding tattoos varies from person to person. Not every tattoo lover likes to get inked on every part of their skin. Some guys like it detailed, some like it minimal. This minimalist fine line tattoo is a great idea to ink on your wrist area. It will also look good on your bicep and shoulder areas.

If you love full sleeve clothing style, with sleeves folded, then we must tell you this tattoo design is apt for you. A good design on the wrist with a folded sleeve shirt looks awesome from every angle. This wrist tattoo design is a good-to-go option to get inked with.

Most tattoo artist believe the back area is always good for having large size tattoos. It provides you with enough space to ink your long-desired tattoo design. This broad tattoo design comprising great detail about dead sea animals symbolizes death and has direct links with marine lives. It is a great option if you are thinking to get your back area inked with some frondeur pirate tattoos.

The skull always brings with it the idea of death but some flowers like roses beside it reduce its gloominess. The flower can represent thoughtfulness, refinement and a mature charm. It can also represent beauty and frivolous femininity. Thus, this design can be an absolute choice for women who are planning to get inked with skull tattoos.

Every tattoo lover around the world has a fascination with monochrome tattoo style. Moreover, monochrome is always a good choice if you have less knowledge about tattoos and if you are confused about which colour you should get inked with. Additionally, Monochrome always enhances the way one looks. This evil skull on your bicep will give you a devilish look and portray your character as a strong one. What are you waiting for? go get yourself inked with a monochrome evil skull tattoo and flaunt your muscular biceps.

Pirates sailed through the seas taking what they wanted and doing what they pleased. In this way, a pirate tattoo can stand for freedom and the steering of a pirate sheep also symbolizes freedom. Free birds are welcome to adore this tattoo design as their own.

This is considered one of the best skull tattoo ideas. While there are plenty numbers of styles available, some people like to go with the classic ones. This classic skull tattoo is specially designed for them.

Here are some more pirate ship tattoo designs with skulls :