10 Best Pirate Tattoo Ideas You Have To See To Believe! 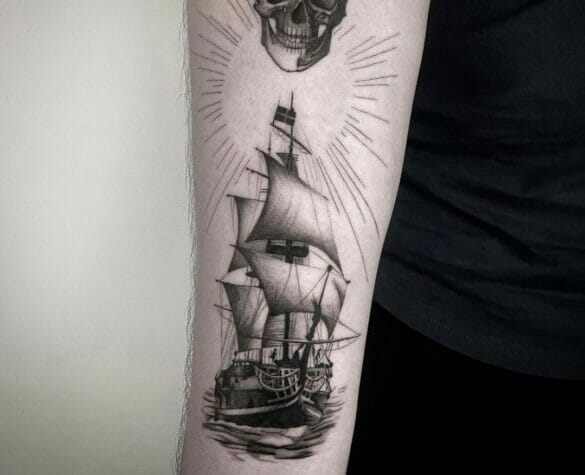 Are you thinking about getting a pirate tattoo but need some inspiration? Check out this excellent list of pirate tattoo designs!

Are you a fan of Captain Jack Sparrow?

Then you must be interested in getting a pirate tattoo! It represents freedom, adventure, and the idea that you are a rebel.

Do you often wonder what does a pirate tattoo symbolise? A pirate tattoo symbolises freedom. A pirate has been represented in mainstream media as “Captain Jack Sparrow,” played by actor Johnny Depp in the movie “Pirates of the Caribbean.” The characters in the film were said to be inspired by real pirates. The most common pirate tattoo design is the “Jolly Roger” symbol, commonly flown as a flag on pirate ships. It was to warn sailors about pirates approaching. The character of “Blackbeard” – another pirate – has been featured in “Pirates of the Caribbean,” but we are not sure what he looks like as there are different interpretations of how he looks. Captain Hook is also a popular pirate character that people get as a tattoo, he is from the “Peter Pan” movie. It is said that Peter Pan cut his hand off and that’s why he has to wear a hook as a hand and is always trying to find ways to have revenge on Peter Pan. When we talk about quality tattoo ink, we ensure that tattoos look prominent. It is always lovely to see vibrant tattoos as it shows that the artist has put in a lot of effort into making the tattoo look good and get the message that the person wants to get across. Pirate face tattoo designs are a pretty common design. Pirate tattoos have become popularized recently with movies and TV shows. A lot of people prefer to have a tattoo based on a character as maybe the character is similar to their personality.

Browse through the article to check out ten awesome pirate tattoo ideas suitable for men and women.

What Does A Pirate Ship Tattoo Mean?

What Does A Pirate Tattoo Symbolize?

Some people think that women were also real pirates but that is debatable. Edward Teach or as he was known as “Blackbeard” was a real pirate during Queen Anne’s era. In this tattoo, the woman has been portrayed as a female pirate. Every person has their meanings to what a pirate wears, but according to history, pirates have been portrayed to have a sort of nomadic and dangerous as this tattoo design shows. If you like your tattoo design to be realistic then this design is the one for you. The quality of the design is amazing as you can see all the details of the design. Pirates may have been considered men, but if you want a feminist twist to a pirate tattoo, this can be a great one to go for.

This design is a traditional pirate tattoo featuring a pirate skull tattoo. A pirate skull means that you live by your own rules and that you don’t follow what people have to say. When you add the phrase “no quarters” that means you will show no mercy to the person who tries to cross your path. This design is to represent that you don’t care about what people think about you. This tattoo was created with a certain meaning in mind and has brought it to the forefront. Hand tattoos have now become common as they can complement your sleeve tattoo if you have one or provide an idea if you want to get a tattoo sleeve. Most people get a tattoo sleeve and add a hand tattoo that can be joined with that tattoo.

A Kraken is an octopus-like creature that represents fear. According to history, sailors were afraid to go sailing to the sea because they were afraid an octopus would trap their ship with its web-like tentacles and would pull their ship and crew under the sea. The quality of this tattoo is beautiful and captures the idea that you don’t want to be messed with. Kraken is a legend that was told to sailors that would set out sailing, as people at the time were unaware of what to expect at seeing they would presume that there were monsters that would kill them. In this design, you can see that it has been made in the style of what the tattooist is comfortable with and not the traditional style of tattoo designs.

According to history, it was believed that pirates never died and that their souls would carry on living. This legend was believed in the country of England. In the design, you can see that the pirate looks exhausted, this can be interpreted as the tattoo representing that fear of getting tired. This tattoo is a fun twist to the idea of the Jolly Roger. This type of tattoo usually only takes one sitting to complete depending on how long it takes for the shading to be complete. This design has followed the attire of what an English pirate would look like. The details on the eyes are amazing, you can imagine what might be going on in the pirates’ heads. This design can also be interpreted as getting tired of the daily grind, sometimes you may feel trapped in what you are doing and are not able to show your true self. This is what can be interpreted from the eyes of the dead pirate.

The quality of this tattoo design is amazing. There are small details that make the tattoo seem realistic and can deliver the message beautifully. You could say that the design was inspired by Jack Sparrow. This tattoo could be made on any part of the body, but it is preferred that it be made on the forearm as that is less painful. The quality of the tattoo is beautiful and the details must have taken more than one sitting to complete. This tattoo has been made in greyscale which makes this tattoo design all the more intricate. The tattooist has used different techniques of shading for this tattoo. The artist has added highlights with grey ink to highlight certain parts of the tattoo. The design also has the “Jolly Roger” symbol and looks like it is overlapping a flower tattoo. The design has been paired with different elements of a pirate and must have taken at least two sittings to complete.

The style that this tattoo has been made is the neo-traditional style that had been popularized in the US. You can point out a tattoo is in the neo-traditional style by the colour palette and how the colours are bright. The design also doesn’t have any shading done and is also considered to be in the old school style of tattooing. The details of the tattoo are amazing to see, with the angle of how they have the female pirate. They have used the same colour palette of a neo-traditional tattoo style which is to highlight the red part.

Tattoo Based On An Anime Character

This tattoo design is based on Ace, which is an anime character. His crew is the “Whitebeard Pirates”. Sometimes people prefer to have a tattoo that is based on their favourite TV show. If you choose to have the character of Ace tattooed, it means that you are ready to try new things and that you are independent and loyal. The quality of the tattoo is amazing as it looked exactly like that of the anime character. This type of tattoo design also means that you relate to the character. Typically men like to get this tattoo design. If you like One Piece, this is a great tattoo to go for.

Pirate Tattoo Based On An Anime Series

This design is based on the “One Piece”. These are symbols that appear in the series. The meaning of the tattoo could mean that you like the series or that relate to the characters that are part of the series. Getting this type of pirate tattoo means that you want your tattoo to have a deeper meaning or that the design does appeal to your personality. This design has been made on the arm and is a one-piece tattoo, which means that the design was made to be intertwined and doesn’t have any separate design.

The details especially the head of the design is made with great effort. This design can be interpreted as the sea god having a human face. This design has the ideal placement on the body as sleeve tattoos typically look like they are made to look like they are in 3D. This tattoo design follows the contemporary style of tattooing. There are also different layers to the tattoo so it must have taken more than one sitting to complete the tattoo.

Pirate tattoos depict freedom and a new chapter in your life. It could also mean that you are ready to take on the world’s challenges for you or that you want to be remembered for something that you did. Here is a selection of pirate tattoo ideas that you may be interested in: