10 Best Nirvana Tattoo Ideas You Have To See To Believe! 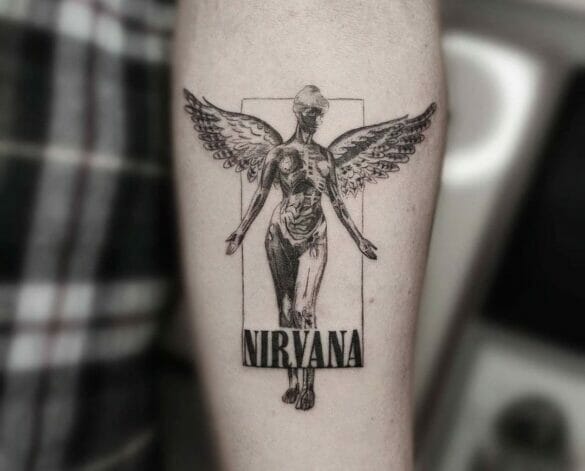 Want to manifest your love for Nirvana or Kurt Cobain in a chic and snazzy tattoo? Here are some of the best Nirvana tattoo ideas that you can get inked with!

Nirvana – the famous American rock band of the ’90s was an archetype of the rising grunge music that created a profound and long-lasting impact on music lovers throughout the world.

The sudden suicide of Kurt Cobain left his fans shook as well as deprived of a lot more masterpieces by him that could have been delivered. A classic Nirvana tattoo is a gesture of love for him or a tribute by those for whom Nirvana is not only a band but a symbol.

A tattoo is not just an adornment that you wear like other accessories to enhance your style quotient; to some, that is more like an inscription that symbolizes something – a message they want to convey or an engraving that tells us something about them. A Nirvana tattoo will tell others a bit about your taste in music or your notions, your ideologies. The band gave us some revolutionary songs that people could relate to; songs that made people experience surreal things; songs that were to leave a lasting impact in their minds, so much that even some twenty years after the band’s dissociation and Cobain’s death, people are still hyped about their songs – their symbol. Inking a Nirvana tattoo is not just memorializing Nirvana with an immortal ink – but also metaphorically keeping the band and their legacy alive within us, something that brings nostalgia mixed with a tinge of melancholy; it’s almost a ‘once in a lifetime’ experience. Be it Kurt Cobain tattoos or Nirvana face tattoos or any other Nirvana tattoos of your preferences – there are a variety of designs one can create upon their original structures – it’s where you let your imagination run free, run wild. We have handpicked some of the most unique Nirvana tattoo designs for you.

This Nirvana tattoo design is with Cobain’s face as the subject is pretty unique. Those who are into astrology and are aware of the impact of planets and moons would find its underlying meaning very appealing. This tattoo design leaves space for multiple interpretations.

The horns on Cobain’s head can be interpreted as his enigma being compared to the charm of Lucifer, the fallen angel. From an astrological aspect, this design presents Kurt Cobain as a Pluto conjunct ascendant. The double-eye creates an optical illusion that further appropriates a Pluto conjunct ascendant having a magnetic or intense gaze. The Nirvana smiley face serves as an add-on to the entire look.

This Nirvana tattoo design is ideally fitting for arm or thigh tattoos. But you can also ink your back with this design. Since it’s a bit spacious and demands all the spotlight, you can choose a part of your body that you wish to highlight, for this tattoo.

This Nirvana tattoo has a simplistic design of the angel from Nirvana’s album In Utero. It’s a transparent anatomical manikin that has angel wings attached to it. This tattoo design is kept very basic, but it still has got the appeal. Those who want to avoid a complicated look that the more generic body arts have and are interested in a simple yet classy Nirvana tattoo can go for this tattoo design. It’s probably best to just get inked with this tattoo design on your arms, where it would look the most fitting. But you can also flaunt it on your shoulder or any other part of your body based on your choices.

This lyric tattoo only has a line from the song ‘Smells Like Teen Spirit’ written in it that says, “oh well. whatever. Nevermind.”

This Nirvana tattoo is as minimalistic as it can get. It’s carefully inked taking the aesthetics into account – especially the chosen typography here is so well-fitted to the aesthetic requirement – it’s very appealing. This has to be the go-to tattoo idea for those who are suckers for aesthetics and minimalism. You can make your own personalisation of Nirvana lyric tattoos as per your choices of songs and specific parts of the lyrics. Have it inked on your wrist or on your forearm for display!

Another cool thing to do would be to share this tattoo idea with your best friend or your partner – while you have one part of the lyrics inked on your body, they can get inked with the successive lines of the lyrics. You can also add quotes of your own and rhyme them with the lines. Pour in your thoughts and creativity while getting a Nirvana tattoo. Don’t just blindly follow whatever designs are on the internet.

This is also an In Utero design but in colours. The In Utero symbol is replete with meanings and symbolic references. Getting inked with this album cover is nothing less than engraving an epitome of art on your skin. The tattoo artist’s part in carefully drawing the details is commendable.

Speak of avant-garde body art. This Nirvana tattoo is by far the most inventive design you’ll come across. It illustrates the cover picture of the song where ‘Teen Spirit’ is shown as an actual fragrance of a perfume kept in a perfume bottle – the filling is blue where the floating baby and a dollar bill are drawn. The fragrance is shown to be flowery. The entire presentation is full of colors and fascinating – the tattoo artist has done a commendable job. This tattoo design is quite inspiring, and you will have a surreal experience for sure if you get inked with this design.

If you aren’t content with the artistic variations of Nirvana tattoos and haven’t yet found ‘the one’, this uniquely crafted Nirvana tattoo screaming ART in all its entirety will blow your mind. It’s a simulation of a Marlboro cigarette box – the difference being ‘In Utero’ written instead of Marlboro. And the name of the song ‘Heart Shaped Box’ is written right below the album name. It’s a very quirky and classy demonstration that will hit your artistic faculty real hard. Flaunt it on your sternum or your neck or your arm!

This Nirvana tattoo offers a different perspective leading to a number of interpretations. This is one interesting aspect of body arts – they offer you a mystery that needs to be solved – a sign that needs to be decoded. This tattoo pictures the Death’s-head hawkmoth surrounded by skeletons that can be linked to Cobain’s art of ‘Incesticide’. Log in to your Instagram to witness this exceptionally beautiful work of art. The detailing is so minutely done! The clarity is also remarkable. It’s the perfect tattoo idea for you to continue with.

This Nirvana tattoo highlights the Nirvana smiley face. A glitch effect is added to the look to make it appear a little darker. It’s accompanied by the song name ‘Come as you are’ along with some roses. It’s literally telling you to be yourself and not conform to the heteronormative demands of society. It symbolizes coming to oneself – coming home. Live life on your own terms and go get the Nirvana tattoo you always wanted to have. Getting a tattoo indeed feels liberating. And what’s better than paying a tribute to this legendary band and getting inked at once!

This Nirvana face tattoo is another sample art that you can add to your list of tattoo ideas. It’s drawn with a layered effect in yellow ink combining with the basic black ink. It’s pretty simplistic, yet has a touch of creativity and elegance.

This Nirvana tattoo is pretty unique as it outlines the structure of the carved pumpkin from Halloween and then draws the Nirvana smiley face inside. It might look a little rough-edged but the idea is pretty innovative. You can always change the details and improve the outlining a little.

With the rapid growth of technological advancement, the tattoo industry is going through a change as well. Many tattoo artists have moved on from tracing paper and lightboxes to digital technologies such as ios that have allowed the artists to make the required changes in a design without starting from scratch. As the tattoo industry is gaining more popularity, the customers are also looking for new ways – something out of the box.

Rock musicians and rock artists have always been a fascination for many tattoo artists and enthusiasts. If we look back, we would remember that many of us had our dreams of growing out our hair and getting tattooed after watching inspiring people like Slash, Kurt Cobain, James Hetfield and more. So, it’s no denying that many people would love to either imitate their rock-idols or be creative and go for some kind of tattoo of their own choice. Nirvana has been a top name in the grunge rock genre and there is no wonder that tattoos of Nirvana or related to it are a popular choice.

Apart from this set of uniquely designed Nirvana tattoos that might almost feel like home to some, there are some more Nirvana tattoo designs you can check out: