101 Best Meaningful Dragonfly Tattoo Ideas That Will Blow Your Mind! 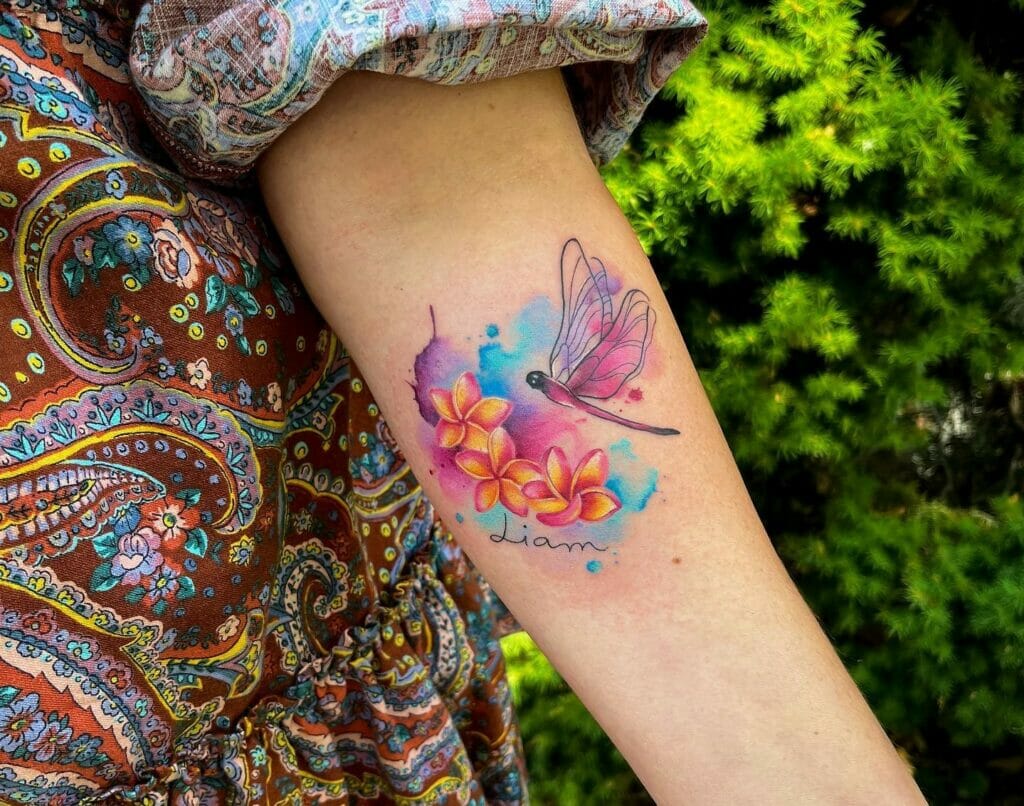 Dragonfly tattoos have been around for years now.

Since ancient times, dragonflies have been associated with good fortune, spirituality, self-realization, and maturity, as these insects are in the final stage of their life cycle. Hence, the dragonfly tattoo meaning is also associated with such symbolism.

A lot of people opt for realistic dragonfly tattoos, as this insect is quite aesthetic in itself. As you can see in this tattoo design, the dragonfly’s wings appear quite delicate. In contrast, the body of the insect has dark coloration, giving the perfect contrast. Such medium-sized tattoos are perfect for the upper arm, as pictured. However, you can also choose to get this inked on your back, leg, or chest.

Unlike this design, the black dragonfly tattoo is also the perfect blend of a realistic tattoo and an artistic one. The boldly inked body of the insect, along with its delicate wings, creates the perfect contrast in this piece as well. In addition, the gradient shading of the wings with the intricate lines mimicking the true nature of dragonfly wings adds up to produce the perfect imagery.

So, if you want a dragonfly tattoo that speaks of your relationship with your soul and brings you good luck, this tattoo is perfect for you. Here, the tattoo artist has perfectly mixed the hues of blue and yellow to bring out a unique look that is instantly eye-catching. Furthermore, the dragonfly’s thin yet intricately inked body makes this dragonfly tattoo idea all the more worthy.

If the meanings of dragonfly tattoos truly resonate with you, then why not opt for large dragonfly tattoos? Check out this design pictured above. This realistic dragonfly has extremely intricate details done in black ink, which imparts a sort of intensity to the whole piece. Covering the entire back, this giant dragonfly is a loud declaration of all the positive notions that we associate with this beautiful insect.

If you felt that black ink is a bit too much in the previous dragonfly tattoo design, there are also other alternatives for you to choose from, in which the wings will have an intricate network of lines, enhancing the tattoo’s wonderful detailing. Unlike the other designs, this tattoo too will cover an entire body part, and the dragonfly’s body can be much more realistically drawn by the tattoo artist, mainly due to the true-to-life markings, body divisions, and so on. Thus, if you, too, are interested in them a dragonfly tattoo design, do check any one of them out.

If you have a colorful personality and want your dragonfly tattoo design to reflect that, then here is the perfect option for you. This dragonfly and gladiolus tattoo is nothing short of art, with its eye-catching blend of colors and hues. The bright red of the flowers, green of the leaves, blue of the dragonfly, and yellow of its wings are all combined to produce the ideal tattoo design. You can also add butterflies to this tattoo to make it even more vibrant. The best placement of such a remarkable design would be on the wrist, neck, arm, or behind the ear.

In many cultures all over the world, the third eye meaning is associated with a state of enlightenment. Even in the Native American culture, the third eye is thought to be a symbol of a gate within one’s consciousness that leads to a higher spiritual experience. So, you can understand how this symbol works well with a dragonfly, which is also related to spiritualist ideas. The third eye in this tattoo is placed quite boldly on the body of the dragonfly. The intensity of this tattoo design is mainly due to the patterns which have been used to ink the insect’s body. Such a dragonfly with several hidden meanings would look great on the wrist or arm, as pictured.

Also, If you want your third eye to be a real eye, then you can also opt for a quirky piece of dragonfly tattoo design. The main point of attraction in such a tattoo will be the shading, which will be used to ink the various parts of the insect. The eye’s realisticness will give the tattoo quite a creepy feeling, to say the least. Such a piece of a tattoo can be a quirky take on the traditional tattoos combining third eye and dragonfly designs.

You can get this small meaningful dragonfly tattoo of art inked on your wrist or even on your neck if you, too, are in search of such a design.

Thus, if you, too, are searching for a tribal dragonfly tattoo design, do check it out once.

Nothing can be quite cute as a small dragonfly tattoo. Don’t believe that? Check out this tiny dragonfly pictured above. While this dragonfly tattoo design is extremely delicate to look at, it still holds all the beautiful meanings that we associate with a dragonfly. Such a feminine meaningful dragonfly tattoo is a common choice for those women who need to cover the presence of any tattoos or like to keep their inked skin private.

You can also check out other dragonfly designs if you want your small dragonfly tattoo idea to be even more delicate and tinier, in which only a few lines can be used to create the dragonfly in the tattoo. Such a little piece could be inked anywhere, and it won’t be easily noticed by anyone.

Botanic tattoo designs will never really go out of style, so you can add a dragonfly to botanic patterns to make them trendier and more meaningful. As you can see in this tattoo design, a dragonfly has been inked next to a bunch of flowers and leaves. The dragonfly in this tattoo idea is also quite realistic, even though it has only been done using black ink. You can add more flowers, like a lotus flower or cherry blossom, to this black dragonfly tattoo.

Geometric tattoos are popular all over the world, and it seems like their popularity will never really shrink. So, if you want to jump on that wagon, get a geometric dragonfly tattoo like the one pictured above. The wings of the butterfly here have geometric lines, resembling wormholes. Even the insect’s body looks like gem drops, while its head has very prominent lines that look very geometric. If you are a science student or the uniformity of lines and shapes entices you, this dragonfly tattoo design can be your go-to choice.

Here are some more dragonfly tattoo designs for you.

What is the meaning of a dragonfly tattoo?

Dragonfly tattoos are a popular design, often chosen for their symbolic meaning. The dragonfly represents transformation and change, signifying a person’s ability to adapt to any situation. It also symbolizes strength and courage in the face of difficult times. Dragonflies represent wisdom and the understanding of deeper meanings in life, as well as joy and lightness of being. The dragonfly is a reminder to stay open-minded and have faith that everything will work out in the end. For many people, getting a dragonfly tattoo is an opportunity to commemorate a special moment in their life or express their inner strength and courage.

What are some popular dragonfly tattoo designs?

Dragonfly tattoos come in a variety of styles and designs. Some popular dragonfly tattoo designs include traditional tribal patterns, watercolor-inspired pieces, abstract works of art, blackwork design with intricate line work, minimalist silhouettes, and nature-inspired pieces featuring flowers and foliage. Many people opt for a more realistic representation of the insect by featuring its wings and body in great detail. Others choose to add a bit of whimsy by incorporating abstract elements like hearts, stars, or moons. No matter what kind of dragonfly tattoo you choose, it will surely be unique and meaningful to you.

How do I choose a dragonfly tattoo design that is right for me?

When choosing a dragonfly tattoo design, it’s important to think about what the tattoo symbolizes for you personally. Consider your personal style, and choose a design that fits with the aesthetic you prefer. Think about what size, location, color scheme, and line work will best represent your intentions. You can also customize the design by adding elements like flowers, stars, moons, or hearts. Ultimately, the best dragonfly tattoo is one that speaks to you and reflects your individual personality. With the right design, a dragonfly tattoo can be a beautiful reminder of transformation and strength.

What are some things to keep in mind when getting a dragonfly tattoo?

When getting a dragonfly tattoo, it’s important to keep in mind that tattoos are permanent. Make sure you find an experienced and reputable artist who is knowledgeable about the design you have chosen. Research the shop ahead of time and read reviews from other customers. Check that the needles and equipment used by the shop are sterilized, as using improperly sterilized equipment can lead to serious infections. Also, make sure you get a good amount of sleep the night before your appointment and stay hydrated throughout the process. Follow these tips to ensure that your dragonfly tattoo is safe and beautiful!