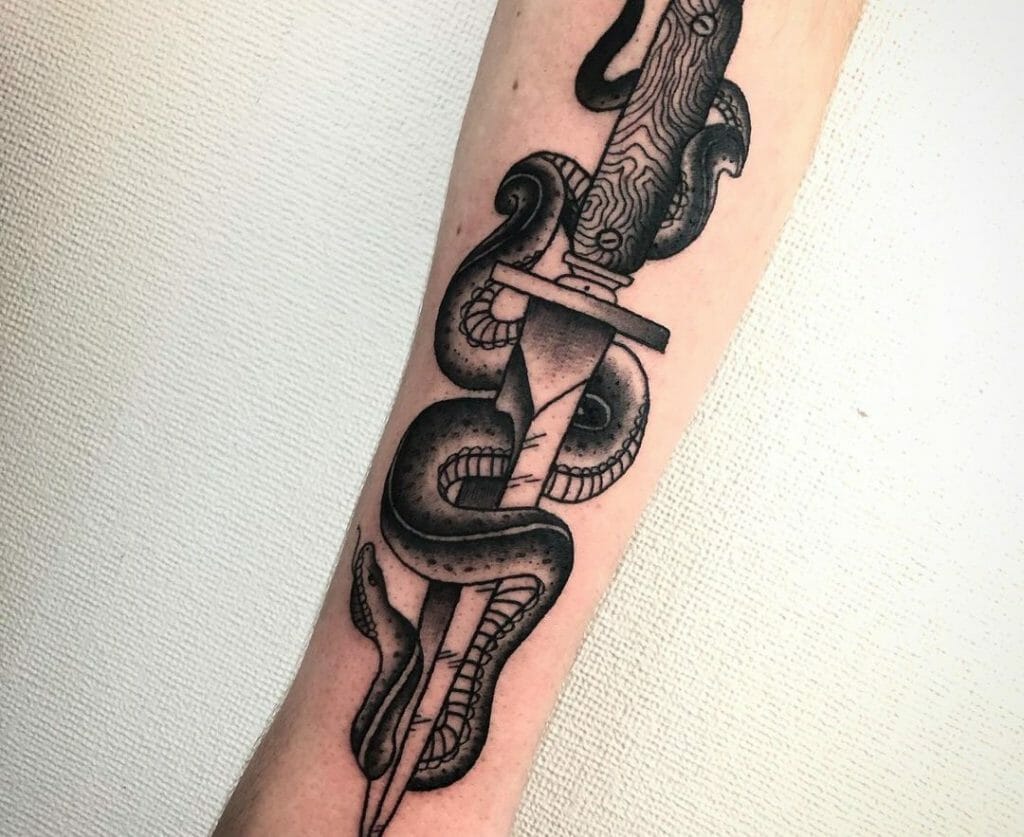 For the bold and beautiful, American traditional dagger tattoo ideas stand out and can be a glorious tattoo idea. You’ve found the right place to find a few.

American traditional dagger designs are one of the most creative traditional tattooing styles.

These dagger tattoos portray art and creativity in a whole new form. There are various styles and sizes to a traditional dagger-style tattoo.

Various other symbols can also be used in these American traditional designs such as various ornamental details, Greek symbols, colder colours to fuse many cultures. The dagger symbolises lost love and represents death as it is a weapon of destruction. However, it does pay homage to the endurance of pain and strength. Therefore people are drawn towards this classic dagger tattoo design.

The symmetrical embellishments and vibrant colours make the dagger tattoos quite traditional and interesting.

What a remarkable way to portray a figure like Dagger with a beautiful rose flower. The tattoo artist has taken a simple design into the next level by the beautiful shading by using such dark inks. The handle of the Dagger has been made so elegantly and the details are fine works of art and creativity.

This is one of the coolest and funkiest tattoo that you can ever imagine. The tattoo artist has portrayed a very basic figure of a tattoo into a very special and creative figure. The handle of the dagger is again made with a lot of creativity and fine details which is giving a very funky look to the dagger. The appearance of the dagger is such that it looks like it has got through the skin of the man however the portion that has been left blank in the middle is the actual skin of the person and not an artificial drawing.

The colours used inside the tattoo are very bold and bright and they add the punch and the element of traditional vibe into this tattoo. The tattoo artist has shaded each colour and has completely block filled some of them to make it look more old school and traditional.

This American dagger tattoo is one of its kind. There are various block like prints on the handle of the dagger. The sharp edge of the tiger has been detailed beautifully as one can clearly see that the dagger is very neat and ready to pierce through anything.

The dagger has been portrayed to pierce through a heart figure and it is also tearing up the portion which it has gone through. The red heart is bordered with an outline of dot like patterns which makes it very old school and traditional. The entire scene of the dagger piercing through the heart is accompanied by various flowers and spiky leaves.

The tattoo artist has very cleverly used the same red colour of the heart to the centre of the flowers which captures the attention right away and shows that creativity in this tattoo is very skilled.

This dagger right here is a very sharp and very unique design to try out. The design of this dagger looks like a traditional pattern of a tribe that has been engraved on the handles and the blade of the Dagger. The tattoo artist has very cleverly used just two colours however he has highlighted each of those two colours in the right proportion and balance to make sure that the tattoo is interesting and aesthetic to look at.

The tattoo artist has used a very dark shade of black to chisel out all the feelings and give more shadowlike depth to the tattoo. However the red colour has been used to emphasise on certain points as the tattoo artist has only used it to outline the borders of the handle and then in the very middle it is used to appear like a jewel and then lastly at the very tip the red colour looks like the blood of someone dripping down the dagger.

The Traditional Heart And Knife Tattoo

A very symbolic and intellectual tattoo of the American Dagger. The tattoo artist has drawn three specific figures that combine together in this one picture frame. The dagger has been portrayed to pierce through the heart which is carried by the hand of a woman. The tattoo artist has cleverly swapped the red heart into a black heart which symbolises that the dagger is purifying an evil heart by piercing through it.

There are simple yet intricate designs on the handles of the tiger and the blade of the dagger has been shaded half-light black and half dark black to show that the blade is quite sharp. The hands of the human has been made very splendidly because the shading has been perfect which brings out a lot of realism and the entire tattoo looks remarkable.

In this American dagger tattoo the tattoo artist has specifically only focused on the details of the dagger and not on any other figures whatsoever. The handle of the tattoo appears to be like the crown of a king with various intricate details and designs and different patterns that looks glorious and high-quality.

This tattoo style is a very different yet very authentic and very meaningful tattoo design of all. There are three main elements of this tattoo. At first we have the main dagger which is a little different than the daggers that we have seen so far. The end of the tip is a little curved which is a very thoughtful design in a traditional dagger because an old-school dagger usually has a round curved tip.

The second figure of this tattoo is the heart that is mostly filled with black ink however the portion where the dagger is piercing through it has been coloured red to emphasise on the fact that it is being broken.

And lastly the third part of this tattoo is the snake is very detailed. The skin of the body of the snake matches with the handle of the Dagger and the fine details of the snake hissing at the dagger makes it fun and interesting. Overall a very authentic and traditional designs and patterns that the tattoo artist has followed in this piece of art.

This is a very optimistic and positive take on a traditional American dagger. The first thing that captures the attention right off the bat are the colours that are used in this tattoo which are bright and bold and very funky.

And the very top we have dot like patterns and a star like figure and as we move down we see that the tattoo artist has very intricately inserted a smiley face that brightens up the entire aesthetic of this dagger tattoo.

As we move down, we see that the dagger is piercing through the skin and has slashed out from the other end. The details of the blood that is coming out of the human skin is very comical yet very creative and authentic.

The colour used to enhance the dripping of the blood is very popping. Overall the colour story of the tattoo is very flashy and the shading of the tiger using various colours has been remarkable.

The handle on the dagger has been made in such a way that it looks like it is made of pearls followed by a sea-shell lookalike stone with various other designs and patterns. The blade of the Dagger has been made sharp on one side and a little blunt on the other which is the mark of realism that any weapon or usable item will have blunt edges sometimes as well.

Overall a very simple design however the execution by the tattoo artist is very detailed and the entire tattoo gives a traditional old-school aesthetic.

This tattoo of the American traditional dagger is one of its kind and a very special design among all. The dagger’s handle is small and filled with various criss-cross and dot-like patterns to make it appear more or rough and edgy. Followed by the centre of the dagger which is embedded by a jewel.

The dagger is being positioned in such a way that it looks like it is kept over a pile of leaves. The tattoo artist has paid a lot of attention to each and every detail even as small as the little holes on the leaf.

The shading of this tattoo is remarkable and the overall execution is very elegant and glossy. Not to forget the little details of the side blings makes it more glamorous. The use of black ink has been done remarkably as the outlines are quite dark and the inner ceilings are the perfect mixture of soft and dark shadowy shades of black.

Some other traditional dagger designs with bolder colours and some Neo-traditional picks are as follows:

What is an American Traditional dagger tattoo?

An American Traditional dagger tattoo is a classic style of body art that uses bold lines, bright colors, and simple images to create a powerful statement. The design typically consists of an ornate or stylized dagger with often intricate designs surrounding the blade. This type of tattoo has been popular for decades in many different cultures, but it was made famous by sailors and military personnel in the United States. It is now often seen as a symbol of strength, courage, and honor.

What does an American Traditional dagger tattoo represent?

An American Traditional dagger tattoo is often used to represent strength, courage, and honor. It can also be used to commemorate the bravery of a particular person or group of people. As a symbol of protection, it may also be worn as a reminder that no matter how difficult life may seem at times, there will always be someone willing to fight for you. It is also a reminder of the strength and courage that comes with being part of the military or other organizations.

What are some popular American Traditional dagger tattoo designs?

American Traditional dagger tattoos can come in a variety of designs. Some popular designs include ornate daggers with intricate designs along the blade, traditional sailor-style daggers, and abstract or geometric shapes surrounding the blade. Other popular symbols that are often incorporated into American Traditional dagger tattoos are stars, hearts, and other patriotic symbols like flags. These tattoos can also be decorated with color, shading, and other elements to create a unique look.