10 Best Jupiter Tattoo Ideas You Have To See To Believe! 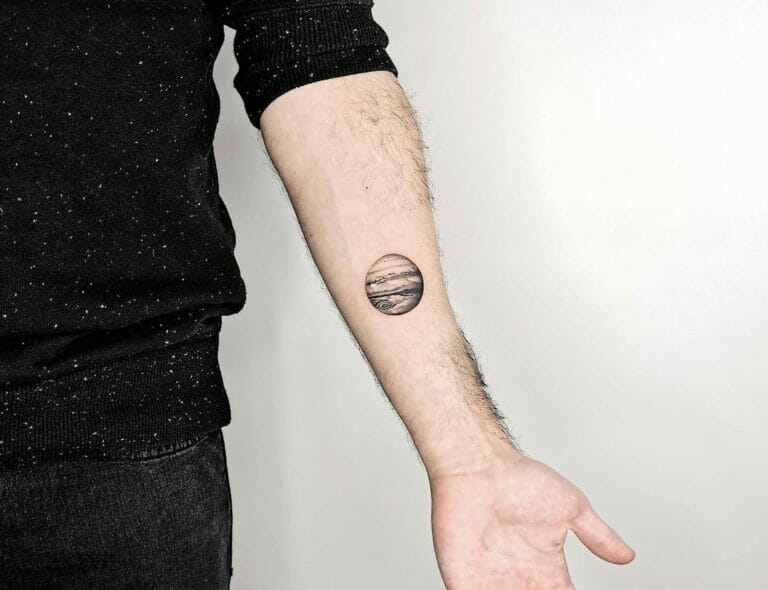 Are you looking for an astrology tattoo that represents good fortune and wealth? Then here are some amazing Jupiter tattoos that you should check out!

Jupiter is the fifth planet from the sun and is also the largest planet in the solar system.

It is also known as a gas giant and has a mass that far supersedes the combined mass of all the other planets in the solar system. The planet was named after the god Jupiter, who is the Roman counterpart of the Greek God Zeus.

Jupiter was the king of gods according to Roman mythology and he was also the god of sky and thunder. He had a brother named Pluto and a sister named Ceres.

Like all the other planets, Jupiter is also thought to have a lot of influence on people’s birth chart and in astrology. Spiritually, people feel that Jupiter brings good fortune and leads to an expansion of wealth in people’s life. Therefore, if you believe in astrology and your birth chart shows the planet Jupiter, you can go ahead and get a Jupiter tattoo if you want a plane tattoo.

If you are in the search for a small and minimal tattoo for the first time, you may want to stick with simple planet tattoo that is not too large or complex. As can be seen in the picture above, the Jupiter tattoo on the wearer’s bicep is quite simple and not too flashy. However, regardless of its size or monochromatic design, it still looks quite amazing from afar.

As the king of gods in Roman mythology, Jupiter had the most power among all the other gods and goddesses in the pantheon. He also had control over the sky and could bring down lightning and thunder upon his enemies if they made him angry. The Romans also made many statues of him in order to worship and please this awe-inspiring deity. Therefore, if you are in search of a tattoo with a Roman god, why not choose the king of all gods and goddesses? As seen in the picture, the tattoo artist has done an amazing job with the tattoo as it looks quite realistic.

If you are in the search for more historical tattoos related to the Roman rule, check out these amazing Gladiator Tattoo ideas.

The actual planet of Jupiter is quite colourful as opposed to Mars which is quite close to it. While Mars is entirely red in colour, Jupiter seems to have numerous stripes on it. There are light blue bands on the body of the planet along with brown-red stripes in between. The very visible red spot on the body of the planet has confused a lot of scientists as they try to figure out what causes that unique red spot on the planet. Since the planet itself is quite colourful, it would make a lot of sense for you to fill your Jupiter tattoo with colours as well.

While most people let their tattoo artists take control of the tattoo design, some people also unleash their inner creativity and draw up a unique design that they have thought of. If you have such a unique and unconventional tattoo design in mind, you should ask your tattoo artist to help materialise it on a paper and then on your arm. As can be seen in the picture, the wearer has created an abstract work of art with the Jupiter tattoo on their arm that looks awesome.

You will find that people who often get planet tattoos, often get Jupiter and Saturn planets tattoo together. Many people think that these two planets which are situated next to each other are quite complementary. While Saturn symbolises stability, reason and resilience, Jupiter represents independence and generosity. Thus, these two planets together influence people to stay positive and optimistic even in the most difficult situations. Consequently, if you feel you need for some optimism in your life to overcome tough circumstances, go ahead and get a Saturn and Jupiter symbol tattoo together.

People who believe in astrology are very open to the notions about planets and their influence in our daily lives. If you are one such person who is quite interested in astrology and horoscopes, you should choose a tattoo that reflects your interests. For example, the tattoo in the picture is a unique one as it features all the planets in the solar system one after the other. However, the Jupiter tattoo is featured right in the middle for ushering in good fortune and wealth.

We often make quirky and bizarre choices for our tattoos that others may not necessarily understand. However, since it is your tattoo, you should not feel ashamed of your choice but go ahead and get a tattoo of your own design. If you are looking for a cute Jupiter tattoo design, you can draw a spaceship surrounded by these planets as can be seen in the picture above. This might also reflect your strength and your wanderlust.

A lot of people prefer to get tiny tattoos rather than large ones. These tiny tattoos look adorable even from a distance and might be perfect for people who want tattoos but find the larger designs to be very time-consuming. As a result, you can just follow the tattoo design in the picture above and get small tattoos of Jupiter, Saturn as well as the Earth’s moon on your arm. You may also choose the Sun or any other planet that features on your birth chart and you think is important in your life.

Dark And Abstract Tattoo Art Based On The Planet Of Jupiter

The planet Jupiter teaches us to be strong and display strength no matter what kind of a situation we might be going through in life. If you feel a spiritual connection with the planet, you should find a Jupiter tattoo design that you think suits you. While there are many cute and quirky tattoo designs which are great for men and women, you can also go for a darker and edgier tattoo design with heavy black ink work.

A lot of people love to get tattoos on their arms as it is the most visible spot on their body. Therefore, any tattoo on their arm can be easily flaunted. If you are in search of a great Jupiter tattoo for your arm, you can definitely draw some inspiration from the picture above. The Jupiter tattoo might be small but the tattoo artist has done awesome work with the colouring of the tattoo and it looks pretty real.

You can also get a Jupiter god tattoo from Roman mythology. This tattoo will be quite large and time-consuming to finish but the end result will be absolutely worth it.

If you are more interested in Greek mythology rather than Roman, check out these amazing Greek tattoo designs.

Most of us believe in astrology or horoscopes and are aware of what each planet means for us. If you feel that you need some good luck in your life in the coming years, go ahead and get a Jupiter tattoo for yourself!