10 Best Jiu-Jitsu Tattoo Ideas That Will Blow Your Mind! 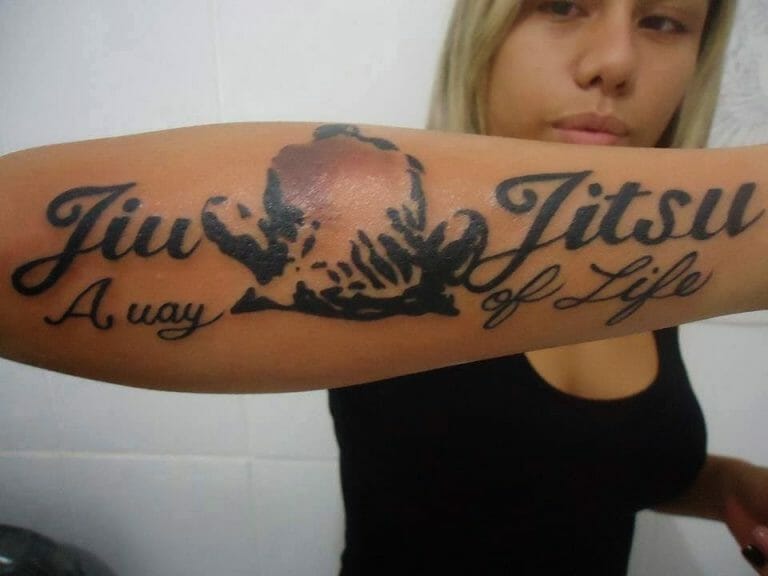 Express your jiu-jitsu personality within the BJJ world with our fantastic assortment of jiu-jitsu tattoos that indicate your dedication and skill.

The “gentle art” (literally translating to Japanese jiu-jitsu) that has taken the whole world by storm following the Gracie family’s pathbreaking efforts, and has carved its niche in tattoo culture.

Jiu-Jitsu tattoos are innovative in their expression of the fighter’s individuality while fostering solidarity and respect. Be it an image commemorating a famous grappler, or any spirit animal, these inked artworks are unique and breathtaking enough to inspire a love for this martial art.

This jiu-jitsu tattoo on the forearm displays a Brazilian jiu-jitsu black belt with a red bar, and white borders on both sides. People familiar with belt rank in this specific jiu-jitsu style will recognise that this BJJ tattoo fits a higher-order professor. Are you a jiu-jitsu trainer with more or less one year of teaching experience? Then this tattoo is perfect for you to flaunt. When you consult your tattoo artist for this special design, do mention the borderline shadow work that makes it appear like a real belt wrapped around the arm.

Our next feature in Jiu-Jitsu tattoos is a combination of three quintessential symbols of the United States navy: The black belt of Jiu-Jitsu, Havana cigar and marine anchor. Some naval officers are notable jiu-jitsu fighters and are immersed in the tattoo culture. This martial art instils discipline and augments self-defence reflexes. And the Havana cheroot is immensely is a sailor’s favourite. Together, the three symbols in the jiu-jitsu tattoos mark the navy at its prime. Navy veterans can therefore get inked with this gorgeous jiu-jitsu tattoo with amazing linework detail filled with vibrant colours of black, red and brown.

The Brazilian Jiu-Jitsu is one of the most versatile martial arts in the world, and the tattoos inspired by the BJJ styles are no exception. Here two BJJ practitioners are engaged in combat, or “rolling”, as they say in jiu-jitsu. Since this is a realistic tattoo style directly linked to the BJJ world, it will often feature background props from fighting scenes, such as the black circle splashed with crimson red signifying a jiu-jitsu belt. Once again, this tattoo features heavy linework but is contrasted with watercolour jiu-jitsu ink for accentuating the shadows. You can also inscribe the words in Japanese, and turn the image into a Japanese kanji tattoo.

Albeit Jiu-Jitsu is a martial art popular in South American countries, it originates in Japan, and the tattoo featured here traces BJJ’s roots back to the Asian country. Apparently, it seems like a red and white striped black belt, however, it is etched like a sheathed sword, or katana, as you might have seen in a Japanese kanji tattoo. The Japanese samurai were experts in jiu-jitsu. They often carried swords to symbolise high ranking. Similarly, this particular black belt also indicates a specific belt rank, that of a jiu-jitsu “coach” or “professor”, who deserves honour, like his samurai counterpart.

Animals are often used as motifs in this “gentle art” tattoo to manifest the spirit personality of jiu-jitsu learners. And what can be a better motif than the royal lion for brave-hearted BJJ grapplers? The animal is metamorphosed into a clock, indicating the countdown period before finally declaring the winner. The way it bites upon the black belt like a prize is surely intimidating as hell.

Marital arts aficionados often lovingly label jiu-jitsu as “human chess” because it sharpens your body’s reflexes and also your mind. Furthermore, both jiu-jitsu and chess proceed in the strategic format. Hence, BJJ tattoos, like this one, often feature chess piece(s). This one features a king, indicating the jiu-jitsu fighter’s excellence, having a red-striped black belt with white borders, implying this jiu-jitsu tattoo befits an experienced practitioner, probably a coach. Adding the words “jiu-jitsu” in italics has heightened the gorgeousness of the entire inked image.

Perhaps the most realistically inked BJJ tattoo with marvellous symbolism! Two BJJ combatants fighting it out on a chessboard, one overthrown, like the knocked out chesspiece, emphasises that BJJ is the human manifestation of chess. The finest BJJ player, like the grandmaster, will try to catch his opponent unaware from an advantageous position. If you have recently won your black or purple belt, this tattoo is perfect to celebrate your achievement.

For the competitive spirit in you, this tattoo featuring two jiu-jitsu combatants engaged in extreme struggle is just the perfect choice. It features a heavy dose of black and white jiu-jitsu ink, and the intensity that the image exudes hints that the wearer is not one to retreat from frontal combat. The artist’s realistic depiction of the rolling scene is breathtaking, to say the least.

You have heard of Kung Fu Panda, now it’s time for Jiu-Jitsu Panda. However, don’t get fooled by this panda’s adorable appearance. For, in this tattoo, the panda looks as determined as ever to give a tough fight to other opponents. And it has a black belt with red stripes and white borders, so don’t even doubt its skills.

The Brazilian Jiu-Jitsu legend, Helio Gracie, is revered by all BJJ fighters for his improvisation of Japanese jujutsu, making it Brazil’s cultural pride. This beautiful tattoo captures Gracie in his later years, basking in the glory of his groundbreaking work. The artist’s genius is evident in their life-like depiction of Gracie, and the exquisite anatomical detailing, not to mention an awe-inspiring background. There isn’t a better way to commemorate BJJ heroes.

Loved our assortment of jiu-jitsu tattoo art? Here are some other fantastic ones for you to get creative with: