10 Best Kanji Tattoo Ideas You Have To See To Believe! 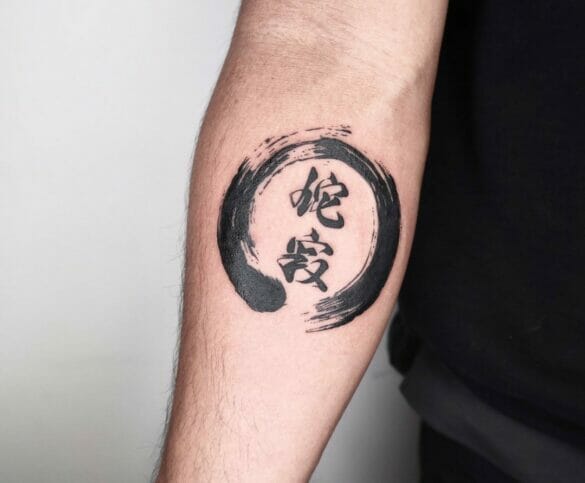 When you think of or Google up the most common tattoo ideas in the entire world, the one word that you’ll always come across is ‘Kanji’.

So, what is ‘Kanji’, and what is all the fuss about?

Let us walk you through the basic details (because of course, this isn’t a language class) and take you through a series of some of the coolest Kanji tattoo designs.If you’re not a native Japanese speaker and have watched animes with original audio, you must have already come across the Japanese script called Hiragana.

But did you know that that’s not all that there is in Japanese?

The Japanese writing system is basically a combination of the logographic script, Kanji, and the syllabic script, Kana (Hiragana and Katakana). Kanji was originally adopted from Chinese characters. These Kanji characters might mean the same thing in both Chinese and Japanese, however, there is a huge difference in their pronunciation. In fact, we can even find different pronunciations of the same character. For instance, the character 木, which means ‘tree’ can be read as both ‘moku’ and ‘ki’. Celebrities like Britney Spears, Justin Bieber, Mike Miller, and a lot more have inked Kanji characters on their bodies. But why is Kanji considerably more popular than Kana when it comes to designs and tattoos? It is the Kanji-specific feature that allows it to convey different meanings in just a limited space. For instance, the Hiragana for ‘Peace’ would be へいわ, while in Kanji, you can simply write 平和, which can further be shortened into 和 which represents ‘Peace’. But apart from that, it also looks super cool too, right? These strokes are like art for non-Japanese speakers. However, what makes it critical to tattoo Kanji symbols is that one stroke more or less and you might end up conveying completely different meanings. Celebrities like Ariana Grande have already been trolled for the same and trust us, you don’t want to be the next. Technically, these tattoos are correct but the language makes it difficult for non-Japanese people to fully comprehend the meaning of a single character, so we recommend always seeking out a tattoo artist who is knowledgeable about writing Kanji or getting some research done yourself and have a complete understanding of Japanese symbols before getting one. Kanji tattoos come in different writing styles and their limited space means a lot more room to spice up your tattoo, or maybe just leave it as it is. Here are a few super cool Japanese Kanji tattoo inspirations that you can choose to go during your next visit to your ink artist:

Minimalistic inks can never go wrong. You can keep your Kanji tattoo minimal and yet convey a special meaning like this pretty little tattoo. Can you also always create variations by using different fonts, such as block print, calligraphy, typed letters, combined with various characters, and color of your choice, like this one below which means ‘patience’ (我慢) in Kanji. Nevertheless, these tattoos require delicate lines, which means the artist should handle them with great care, so please make sure your tattoo artist has experience in minimal tattoos.

LOVE, a four-letter word, yet spells out power, and beauty just by the sound of it. Spell it in any language and it will sound just as beautiful as it is. A love tattoo can signify trust, friendship, faith, passion. One of the self-explanatorily most popular Kanji tattoos is the ones that say ‘Love’ (愛) and red is just the perfect color to go with it. ‘Love’ (愛) can also be inked as a minimalistic and will still look cool as body art. Ink this beauty on your arm, back, wrists, leg, wherever, and let it bring out your delicate and emotional side with your favorite art form.

Ah, the pretty sight of cherry blossoms, Sakura in Japanese, infused with a meaningful Japanese symbol. Now can this get any better? We bet not. Sakura is a spring flower and in Japanese culture symbolizes a ‘time of renewal’. Add a few sakura flowers to your Kanji tattoo and make your inked beauty stand out in the crowd with power-packed meaningful tattoo art. You can either choose to go wild like this artist did or just keep it simple, with a pinch of sakura into your ink, capture the freshness of the spring season into your body. Here is another example of how you can keep your sakura Kanji tattoo simple and yet stunning.

We are all familiar with katanas that we’ve often watched being swooshed by a Samurai on TV to slice their enemies into tiny pieces. A katana’s ferocity and unique touch make it a great choice for tattoo art thanks to its ferocity and unique touch. Combine the two authentic Japanese culture touches and create a magnum opus handprinted on your body. For additional details, if you want, you can also add a few blood drops and make your tattoo look more stunning like the one below.

Hannya masks are used in Japanese Noh theater, traditional Japanese musical theater, to represent a jealous woman. These masks have a lot of deeper meanings associated with them and have been a popular Japanese tattoo design. These mask tattoos can convey an intense passion and love, and combined with a Kanji character, can create a multitude of emotional and strong meanings in your tattoo.

A dragon in Asian culture is known for its powers, fierceness, and wisdom and represents freedom and good luck. Dragons are said to bring happiness and longevity and symbolizes guardian angels. So, go ahead and shower yourself with some good luck with a dragon tattoo and add an extra touch of deep meaning to it with a cool Kanji symbol, and show off your free and fierce soul.

Customize your Kanji tattoo with an artistic vibe with a brushstroke effect like this. You can convey multiple meanings through your tattoo with a Kanji tattoo customize in any font of your choice and you have a beautiful tattoo that is both meaningful and eye-catching. Brushstroke tattoos can be minimalistic by keeping it as it is or spiced up with a pattern or imagery.

To master Japanese calligraphy is hard due to its complicacy and if you cannot find someone who understands Japanese, a typed Kanji tattoo like this one is for you. Do your research and make sure your Kanji character is conveying what you want to convey and just get a simple typed Kanji font and you should be good to go. Alternatively, you can also choose a font like the one below to show off your bold personality.

Although these were a few of the most popular tattoos in Kanji, the list really doesn’t end here. You will always have creative freedom with Kanji tattoos. These pretty Japanese characters can be mixed up with any tattoo design or image and create a whole new dimension of metaphorical meanings on your body. Apart from these Kanji tattoos, you can also alternatively add sketches of other symbols associated with the Japanese culture like the Koi fish, which symbolizes good luck, perseverance, and success. You might also want to add the symbol of prosperity, the bamboo, and your tattoo will still remain gorgeous and at the same time bring you good fortune and prosperity. Kanji tattoos are incredibly versatile, allowing you to also apply these symbols in different locations according to your needs. Japanese tattoos are full of powerful meanings and getting them in any creative way will not go wrong for your new body ink.

Now we know what you might be wondering. How much is a Kanji tattoo? Well, mostly it depends on the size, details, and the placement too. It can also be difficult to figure out how and which Kanji tattoo to get, so we strongly recommend you consult a tattoo artist to figure out a tattoo that is perfect for you and your special message.

Check out our suggestions for more Kanji tattoo inspirations for your new body art: